Sara Allison was checking on their chicken Bernadette in Hull, Texas when she found a snake trying to slither underneath the hen. 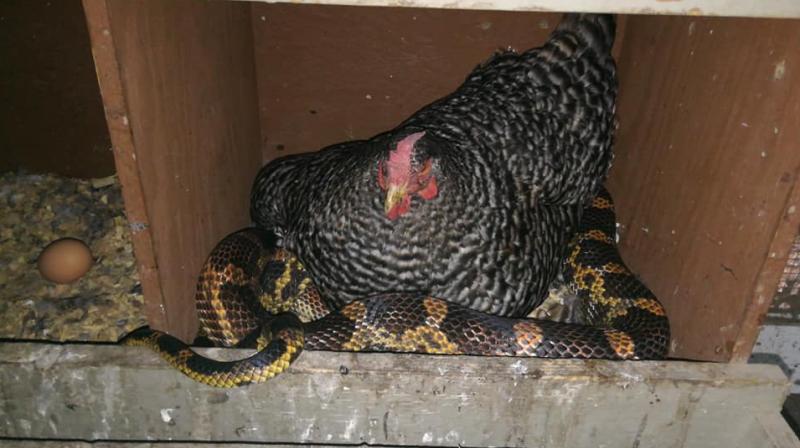 Allison was unsure of what to do and took to Facebook with photos of the two animals to seek advice. (Facebook Screengrab/ Sara Allison)

In what can only be termed as one of the most bizarre things one can encounter, a Texas woman Sara Allison took to Facebook to post what she discovered when she made an evening run to the hen house.

According to reports, Sara Allison was checking on their chicken Bernadette in Hull, Texas, around 6:30 pm when she found a snake trying to slither underneath the hen. While Allison was shocked, Bernadette, unlike her, didn't seem concerned at all and kept on sitting on the rat snake.

Taking to Facebook, Sara wrote, "Look at this dummy! Too stubborn to get up when a rat snake wants a meal lol. What should I do?" 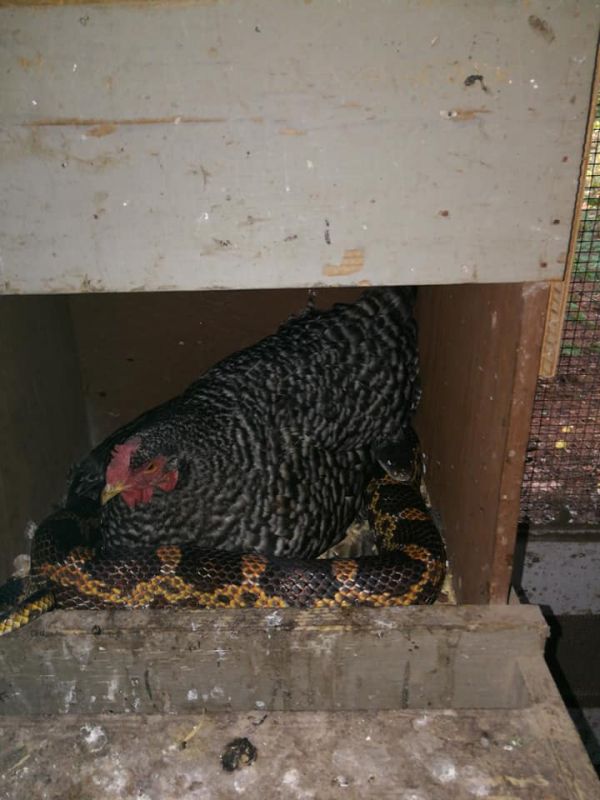 Allison was unsure of what to do and took to Facebook with photos of the two animals to seek advice. (Facebook Screengrab/ Sara Allison)

She further wrote, "I'm taking care of some stuff for my parents while they are sick and in the hospital. My brother hurt his back so he can't climb up the stairs to see if it's gone on it's merry way tonight before he shuts the chickens up for the night. I don't wanna hurt it since it's just had a meal or have chickens attack it after they're shut in with it."

Allison was unsure of what to do and took to Facebook with photos of the two animals to seek advice.

As soon As Allison posted it on social media, people were commenting on how to get the snake out  of its predicament without hurting either species and telling her not to panick, with one user posting, "Um, can you get your butt outta my face please?”

After some time, Allison posted, "I left it alone and it went on its way after it saw me. The chicken was unharmed. The snake has never eaten any of the chickens, just a few eggs here and there," Allison said. "The snake is our buddy and we love when we get the chance to see it."

And it turns out that the hen itself is a bit special to the family, answering to a query regarding its breed, Allison wrote, "She's a good hen. She was a good momma to the chicks my mom got recently. She got 30 and this hen was the only one that would take them in so she spread herself over 30 chicks lol. It was pretty cute to see. She's a barred rock.