The healing power of art

Asiya Beevi was seen dancing in a relief camp with children, and has been offered a role in a regional movie next. 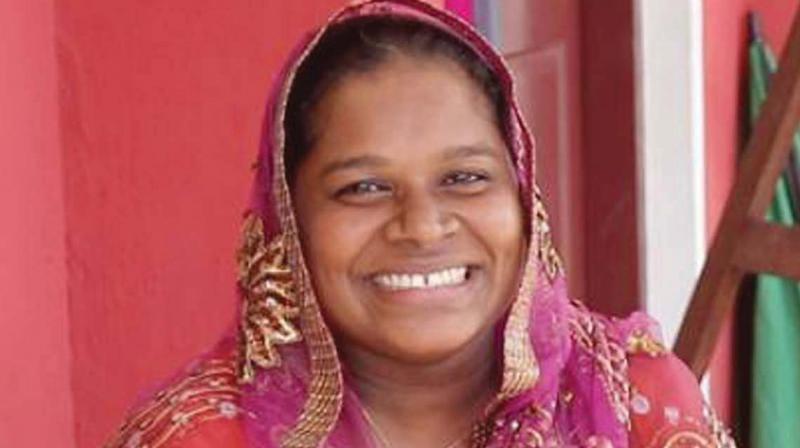 Every calamity comes with distress. The flood Kerala has witnessed recently caused great distress to those who are residing in various relief camps. Some have lost   people while others have lost their assets. Then, there are people who lost both their family and wealth.

The time after a disaster is also a period when stress, anxiety and other depression-like symptoms pop up. To fight them and alleviate grief, one needs help. Art is one effective tool that can pacify troubled minds. Singing songs, colouring or breaking into a dance can divert the inhabitants’ attention and help them as the reality sinks in. 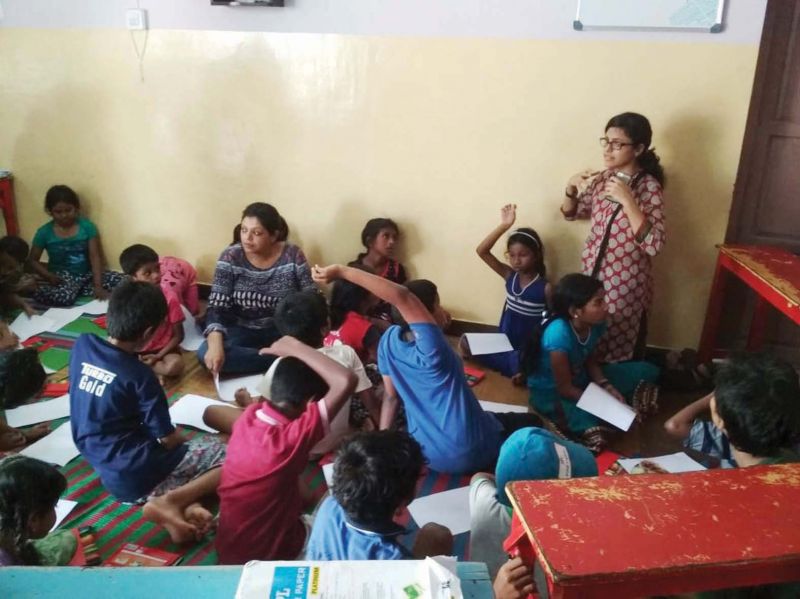 The relief camps in Kerala have witnessed a few such instances lately. Videos of an old man swaying to a song and Asiya Beevi, along with some children, dancing in an effort to spread positivity among the inhabitants have gone viral. Ashique, who witnessed the old man’s dance and uploaded it on social media, says, “He came to the camp at Govt. Girls Higher Secondary School in South Kochi after being evacuated from Moolampilly. It was a group of youngsters who organised leisure time for them in the evening. People were asked to come forward and perform. He came forward.”

Those belonging to the field of art too have jumped onto the bandwagon, by using their talent as a tool to relieve depression. Also, they feel movement would let the residents release tension in an easier way.

“Creativity is a great tool for emotional and psychological healing. It works similar to meditation and prayer but in a different kind of way,” says Tanya of TAOS (The Art Outreach Society). “When the floods came, as an NGO, we could only reach out through our mission. It’s so crucial that we understand the need for positive thinking, reinforcement of hope and rebuilding of lives — emotionally and materially. Art expression is actually an intense procedure and requires time and personal work. Since we were dealing with large participants, it was important we worked on creative activities through movement and the art, focusing on positive aspirations. One of the things noticed was people in the camp did not really know each other and so a sense of togetherness was important.” 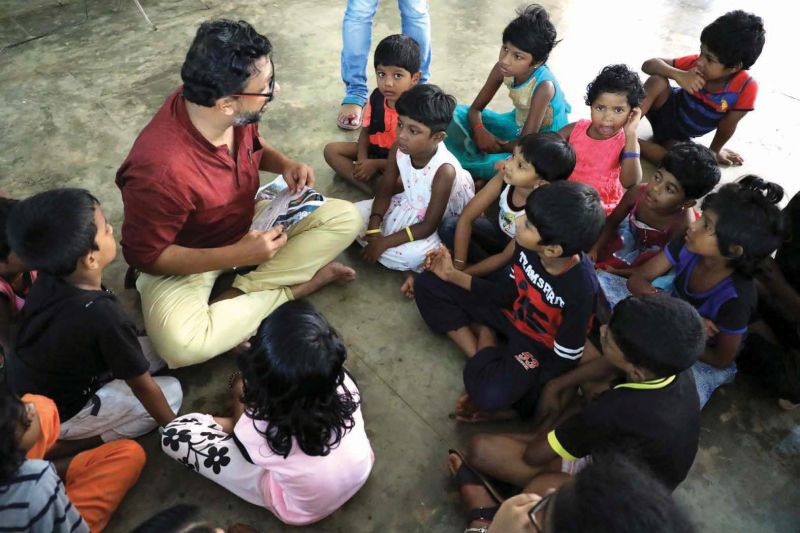 Manu Jose with kids in a relief camp.

The TAOS team visited the camp at St Antony’s School in Kacheripady, Kochi. She says, “We had our team members and other volunteers do the work. The response was great and we left a smiling lot of people behind. We had worked with women and children only. Next, we want to look at community building. It’s one of our missions for the organisation. We, of course, will need plenty of support for that.”

Manu Jose, a theatre artiste and his friends O.C. Martin, painter and theatre musician; Sudhi Vattappinni, actor and folk singer; and Sanoj Mamo and Ranjith Dingy, both of whom are actors, have been travelling to various camps in the past few days. “My team Meandyou Foundation does these activities in association with DC Books and the district administration,” says Manu. “Once the floods started, I realised that something like this would be needed soon. It was then I got a call about a requirement in Alappuzha and we began our work.”

The first task was to define the format. Manu discussed the idea with his friends and psychologists. “It is because we don’t have a model. We have never confronted a grave situation like this,” says Manu. “One thing we made sure that our performances wouldn’t be loud or pushy because not everyone would be in a mood to enjoy this,” he adds.

The whole process is in art therapy mode. The team followed different methods — singing songs, narrating stories and dancing. “Tension is there in our body. We can reduce that through singing, dancing, etc.,” he says. They were careful to make the activities interactive. “We asked the organisers not to make announcements about the performance in camps because we wanted the inhabitants to become a part of it naturally. We went there, sat in a corner and started playing with the toys we had brought. Soon, the children joined us. In another instance, we made a tune with a spoon by hitting on a vessel in the kitchen. Gradually, they picked up the rhythm. We found that method quite interesting,” explains Manu. “Also, we tried different kinds of storytelling. For instance, we tried picture card storytelling. Then, we did mime,” he adds. Both children and adults took part in sessions.

At the end of the session, they distributed a sheet along with crayons. On one side, there was a picture for them to colour. “The other side was empty. On that side, they were free to draw anything. But we asked them to draw a picture of that one thing they were hoping to see at home once they returned. That was part of the therapy. By asking them to draw that thing, we were preparing them to face that harsh reality. To draw that one subject, they needed to visualise every little thing in their homes and pick one. It was a method to help them.”

For P.R. Arun, founder member of Fifth Estate, a theatre group in Kochi, it was Minister A.K. Balan's Facebook post exhorting all artists and artistes to come forward to provide stress relief to the affected was the trigger. “Our aim is to fill their hearts with positive vibes and to create a mood of overcoming the tough time,” he says. “Theatre is a good tool to create team dynamics. It is the children who are in the shock. We are planning to help them by involving them in part of our activities. We also have plans to share positive human interest stories.”