Comfort and fun is the new Civic-sense

The 10th generation version comes with a diesel engine option for the first time. 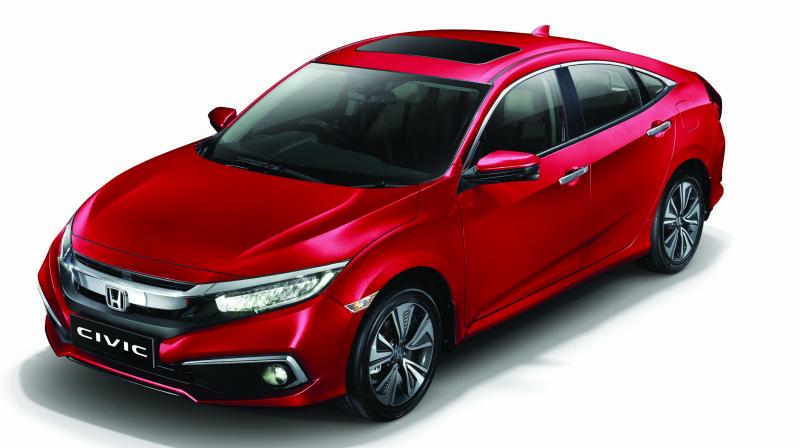 It was love at first sight for the Indian market when the Honda sedan was first introduced, and now that it is back, it’s time to fall in love with it all over again.

Japanese car giant Honda’s bestselling car in the world, Civic, has made its return to the Indian market with an all-new model, after a hiatus of seven years. The 10th generation version comes with a diesel engine option for the first time. While the petrol variant is priced between `18.04 lakh and `19.55 lakh, diesel costs between `20.65 lakh and `22.45 lakh.

Since it was first introduced in 1972, the Civic has cumulatively sold more than 25 million units — 800,000 units annually — all over the world. The eighth-generation version was introduced in the Indian market in 2006. It instantly became a success and achieved sales of almost 55,000 units by 2013.

I took the top-end diesel Honda Civic diesel for a spin.

Honda’s contemporary design language on the Civic is radical and sporty. Exaggerated lines and curves abound — from the tipped-forward chrome grille that flows into upswept LED headlamps, to the bulging front and rear wheel arches and the rising beltline that meets up with the curved, coupé-like roof at the back.

The 17-inch alloys really help the stance of the car. Plus, the angular, C-shaped tail lamps are particularly aggressive, and although it looks like it has a lift-back boot, it is a conventional sedan boot opening. The opening is wide enough, which makes loading the wide, 430-litre boot, pretty easy.

The low stance of the Civic is apparent when you get in and out of it. This is uncomfortable for tall and elderly people. However, once you drop down into the seat or into the driver’s seat, you feel instantly connected to the car.

The new Civic’s interior is easily the sportiest in its segment in the country — with a good dose of luxury. The fit and finish is of great quality, and soft-touch materials are present on most of the dashboard.

The dashboard has a nice texture beneath the leather dash-top and all the controls fall neatly to hand. Storage space is great, with a big glove box, huge door bins and a giant storage bay between the front seats. Though the temperature and fuel gauges are still analogue, the rest of the instrumentation is taken care of via a colourful high-res screen in the centre that looks really attractive.

The seats are softer in the centre and firmer on the sides, providing just the right blend of comfort and support. The driver’s seat is powered, too, which is par for the course in this class and makes finding your ideal driving position very easy; however, a memory function would have added a bit of convenience. Legroom is ample and, in fact, class-leading, and the seat offers great thigh support, but headroom is far from ideal.

The sedan is well-equipped with the likes of LED headlamps, dual-zone climate control, a powered driver’s seat, the part-digital instrument cluster, a sunroof, and six airbags. It also features some segment firsts, like remote engine start, an electronic parking brake, the auto-locking on walking away with the key, and the innovative Lane Watch camera feature (a rear-facing camera in the left wing-mirror shows you if it’s clear to move once you turn on the left indicator).

The Civic’s diesel engine handling is smooth and crisp. The diesel engine is well tuned for mileage and averages a superb 26.8 kpl, as claimed by the company. The sedan impressively sails over poor roads and even potholes. The longer-travel suspension gobbles up most surprises and even the rudest ones are muffled. The brakes, discs on all corners, are absolutely super too, with a strong bite and good feel at the pedal. The Civic, revved to its near 5000rpm redline, will hit an indicated 90kmph in second gear. Whether you rev it hard or at idle, the engine is suitably muted and smooth. It makes enough torque at low RPMs to sail through the city or cruise down highways smoothly. But overtakes requires you to work the stubby gear lever, which is perfectly positioned.

While I had expected a lot more power and the car to feel quicker, its performance is not at all disappointing. The drive is smooth and comfortable both in cities and highways, but it lacks the punch that you expect.

Should I buy it?

Tthe 10th generation variant has marked improvements in all the crucial areas without losing the traits that loyalists loved. It not only should keep fans of the original happy, but it will surely draw new buyers to its fold.