The Sussexes make pitch for mental health on their South African tour. 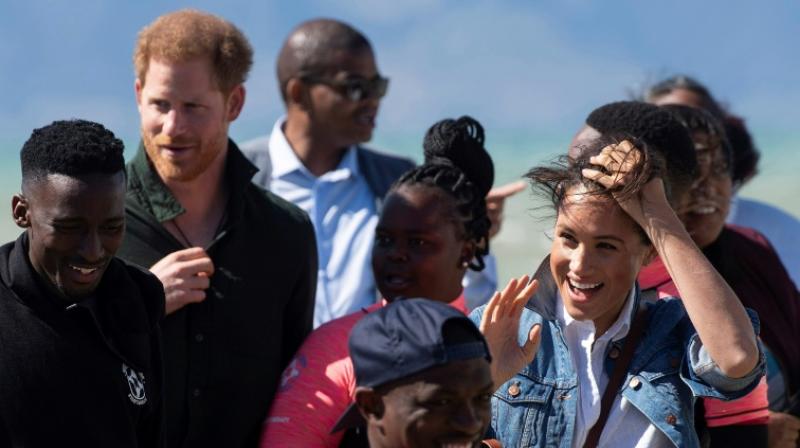 The star of the visit -- little Archie -- has so far been out of sight, to the chagrin of royal-watchers. (Photo: AFP)

Prince Harry and his wife Meghan on Tuesday gave a royal boost to South African surfers harnessing the power of the waves to promote mental health in poor communities.

Help through sport -- an issue famously close to the prince's heart -- marked the second day of their tour of southern Africa, the first official trip by the Duke and Duchess of Sussex since becoming parents to baby Archie in May.

Buffeted by high winds, the couple chatted to members of an NGO called Waves for Change, which uses surfing to help stressed youngsters in Cape Town's slums find positive thinking and calm.

"Nelson Mandela once said that sport has the power to change the world," said Thembaletu Mani, 24, one of the mentors who greeted the couple at Monwabisi Beach. "So that's what we do here, conquer the challenges through sport."

Eighty-year-old Wendy Perks and her daughters Jenny and Carol were among those who braved the winds to await the British royals. Wearing masks of the face of Harry's grandmother, Queen Elizabeth II, each had a camping chair adorned with a string of small British flags.

"We grew up with Princess Diana, so we just love her boys. She was the people's princess. We love all the pomp and ceremony. Proudly royal and proudly British, and South African." She added: "We're guessing Meghan will have a pony tail and jeans because it's far too windy for a dress."

That prediction turned out to be spot-on. The duchess emerged from a luxury 4x4 clad in black trousers and a denim jacket with a white blouse, while Harry wore dark trousers and a green shirt.

The couple also saw the work of The Lunchbox Fund, which provides nearly 30,000 meals to poor children each day. The charity is one of four organisations chosen by the Sussexes to benefit from donations made by the public when Archie was born.

Surfing-clad volunteers then invited the royal couple to join them in a dance, followed by a brief session of meditation, seated in a circle on the beach.

Annelissa Mhloli, a 24-year-old surf coach, sat between Harry and Meghan. "It was amazing because of how chilled and welcoming they were," Mhloli said afterwards. "They made me feel so comfortable."

The star of the visit -- little Archie -- has so far been out of sight, to the chagrin of royal-watchers.

The royal couple then toured Cape Town's Bo-Kaap district, a predominantly Muslim area which draws tourists from the world over for its neon-coloured terraced houses and cobbled streets. They visited the Auwal Masjid, South Africa's oldest mosque which was established in 1794 in the area, earlier known as the Cape Malay district.

"We welcomed the royal couple into the home of a family that has been staying here for many generations. We wanted them to meet an ordinary Bo-Kaap family and get a feel for the tradition of the area and of course taste our food. We are happy that they came because it creates awareness. It will attract more tourists which we welcome," said Osmand Shaboodien.

"It made us feel good, anybody would feel honoured to have a member of the royal family in their home," said Shaamiela Samodien, 63, who cooked for them.

"We (are) used to cooking for big parties and family. So it’s no effort. They tried koeksisters (a traditional South African sweet) and apple crumble," she said.

The couple were also given flowers by handicapped children and adults sitting along the street in their wheelchairs.

The family arrived in Cape Town on Monday, immediately setting the tone of their visit with a show of support for victims of gender violence, which has gained epidemic proportions in South Africa. In a speech to local people on Tuesday evening, Prince Harry said Monday's visit had brought home to him and Meghan "the power of the youth."

"We were so impressed by the young people changing the conversation and standing up for what matters to them," he said.,The family is to remain together until Wednesday, when Harry will travel alone to Botswana, Angola and Malawi.

He will visit conservation and HIV prevention projects, and a cleared minefield in Angola through which his late mother Princess Diana famously crossed in 1997. The duchess will remain in South Africa. She and Archie will reunite with Harry in Johannesburg next week, where they will complete the tour and fly back on October 2.