An arty tribute to superheroes

A series of art workshops in the city will help superhero fans create their own merchandise and learn new art forms. 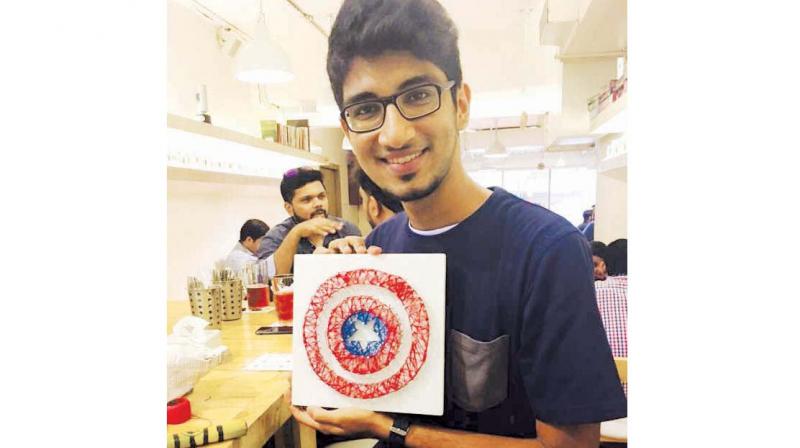 Comic book geeks across the city who want to delve into the artsy side of things would be glad to know that a month-long art festival is being curated that caters to just such a crowd. One can learn how to create their own comic strips, make superhero art with zentangles, string and much more. Spanning across late October and  November, the festival will have young city-based artistes hosting workshops in varied and quirky art forms.

The idea for a series of art workshops around the superhero theme came to shoe-art expert Aliasgar Sabuwala, who is an avid Captain America fan himself, and is also awaiting the release of Thor: Ragnarok and the Justice League films. “It just seemed like a good time for a theme like superheroes, since people are awaiting so many superhero themed films and Comic Con is also coming up. The artists who are going to be a part of these workshops are either my friends or people whose work I admire, so I thought we could all get together and create this workshop series,” he explains.

Although he admits that he is proficient in several of the artforms himself, Aliasgar explains that it is better to stick to specialties. “My own specialty is shoe painting, so I’m taking a workshop on that,” he says, adding that the shoe  art can be of superhero motifs, or entire comic strips. “We use simple, monochrome canvas shoes and the shoes in themselves are like a canvas for an artist. You can paint whatever you want on them,” he clarifies.

Unlike Aliasgar, Jamila Bootwala from That Yellow Gift is an Ironman fan. Despite the civil war between the superheroes in question, the two decided to collaborate for the workshops, thanks to their mutual love for art and comic books. “I’m not an avid comic book fan but I do follow the DC and Marvel universe and also have my favourite superheroes, whose tracks I follow. I had also been meaning to conduct a workshop for a really long time. Though I usually make a variety of products with The Yellow Gift, it seemed like a better idea to just stick to stone painting,” says the artist, adding that they will be providing the smooth pebbles on which the participants can create their own superhero art.

Unlike many of his superhero loving fellow artists, Umesh Raote from Ultramax simply agreed with the theme because he wanted to spread more awareness about the artform of 3D printing. “3D printing is one of the most essential forms of art today, and it’s required in a variety of fields ranging from reconstructive surgery to architecture. You can also simply have fun with it and create your own action figures, as we will be doing at the workshop,” adds Umesh.

The workshop will find Umesh displaying the use of a 3D doodler. “It is one of the simplest implements of 3D art. A semi-liquid ink comes out of it, with which figures can be formed, before they solidify,” he explains.