Taking poetry to the streets

City poets will gather around chai stalls across the city for a unique tea party today. 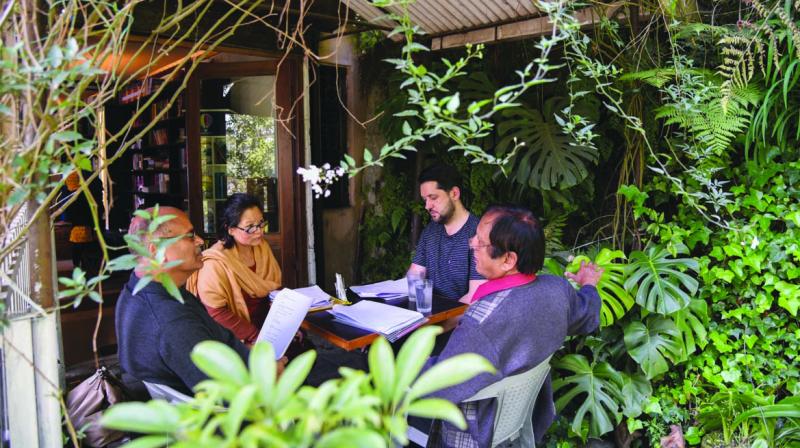 A group of poets during a translation session.

Poetry and tea have a long history of symbiosis. Long discussions over cups of cutting chai are as much a part of the Mumbai culture as the iconic vada pav. Today, Mumbai will see a tea party of a different sort that takes poetry to the masses. Poets from Germany, and different parts of India will be taking to the city streets to bring Mumbaikars poetry spanning different Indian languages apart from German. This event marks the beginning of the culmination of the two-year Poets Translating Poets (PTP) programme.

German poet, Christian Filips, who conceptualised the whole idea of the Mumbai Tea Party, which kicks off the three-day event, admits freely that he has no idea how the final event will shape up.  He says, “We simply do not know yet what is going to happen. The Mumbai Tea Party can only happen in Mumbai, at those special tea stalls, with all the people showing up and participating. It will be a one-of-a-kind event, because it completely depends upon the people who end up joining in. And that’s what I like so much about the idea!”

Poet, novelist and translator, Sampurna Chatterjee, who is looking forward to being a part of a tea stall adda, says that reciting poetry at the tea stalls will definitely be a challenge for her. “I imagine it might be more challenging to read at the tea-stall with random passers-by glancing in, or walking past, some even stopping to listen, than within the carefully controlled environs of a café or gallery reading. This might be more unpredictable and I like the way that makes me feel,” says an enthusiastic Sampurna.

She too is ready to be surprised by the audience of Mumbai. “Perhaps we will get an audience as eclectic, excitable and unpredictable as crowd on a Mumbai street? I’m approaching it with a completely open mind, ready to be surprised, delighted, who knows, maybe even disappointed,” she says.

Kashmiri poet, Shafi Shauq was, in fact so inspired by the tea party event that he even wrote an entire poem titled Tea. “I will be reading out the poem tomorrow,” says Shauf, adding that the programme inspired him to push his boundaries as a poet. “I was highly encouraged to write poems beyond the traditional limits of genres through the PTP program.”

While Shafi was inspired enough by the concept to write a poem, Christian goes a step further to claim that the tea stall is poetry in motion. “I believe that poetry is already there, in every tea stall. You just have to be attentive. You have to stop just being an audience,” he says.