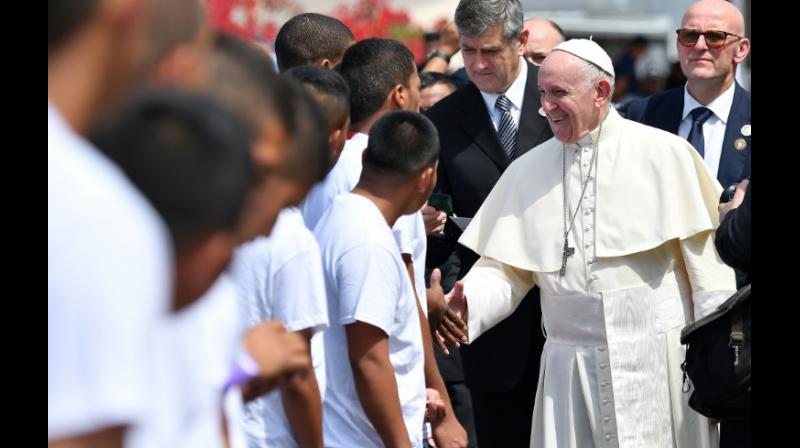 Pope Francis greets young detainees before leaving Las Garzas youth detention centre in Pacora, on the outskirts of Panama City, on January 25, 2019, during his visit to Panama for World Youth Day. (Photo: AFP)

The Vatican said Friday that next month's meeting of Church leaders in Rome was a unique chance to tackle the "terrible plague" of child sex abuse by Catholic clergy.

"This will be an unprecedented occasion to face the problem and really find the concrete measures so that when the bishops will come back from Rome to their dioceses, they will be able to face this terrible plague," Vatican spokesman Alessandro Gisotti said.

Gisotti played down questions over why Pope Francis failed to speak out against clergy sex abuse during his ongoing visit to Panama. The pope addressed hundreds of bishops from across Central America on Thursday, the first full day of his five-day visit to Panama for World Youth Day, but never mentioned the scandals.

It was the largest gathering of bishops since he announced the February summit with Church leaders from around the world to discuss the biggest crisis facing his papacy. Gisotti said the Church was under "incredible pressure" and that the issue was never far from Francis' mind.

"What I want to underline is that it is not necessary that every speech with every bishops conference or every situation where there are young people he has to face this problem," Gisotti told a news conference on the sidelines of the giant meeting of Catholic young people, where he faced questions on the omission.

He said the issue "is really very very present" for the 82-year-old pontiff. He said the 21-24 February meeting with the presidents of bishops conferences had been called amid an "extraordinary situation". "You can understand how important this meeting is for the pope," said Gisotti.

In the midst of the worst scandal to affect his papacy, Francis in September summoned the heads of every bishop's conference to discuss the prevention of sexual abuse by clergy and protecting children. Prosecutors in the US state of Pennsylvania found 300 priests were involved in child sexual abuse since the 1940s, crimes that were covered up by a string of bishops.

Prosecutors in half a dozen other US states have announced plans for similar investigations. The pope accepted the resignations of several bishops in Chile last year after investigations revealed decades of sexual abuse by clergy in their dioceses.