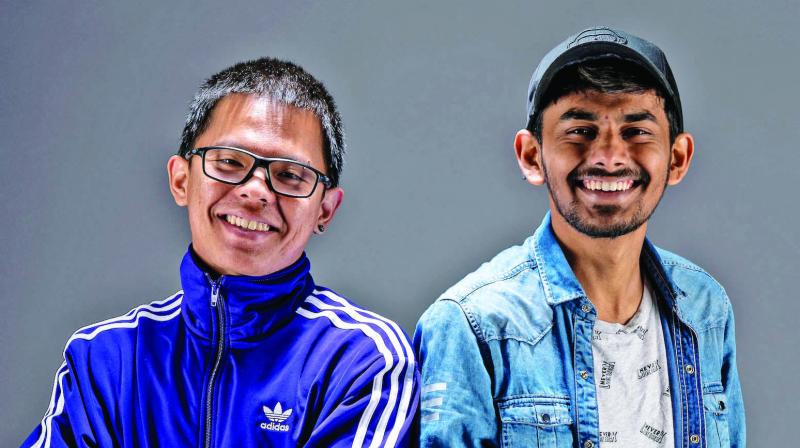 On a lazy afternoon, an impromptu hip-hop jamming session in a Noida classroom brought together rapper Ashutosh Rai aka Warboy and music producer Devam Pandey aka DEVM, who later emerged as the winners of Redbull’s Spotlight Season 2. After winning the title last year, the duo released their first single Ek Chhoti Si Umeed off their upcoming debut album Out of the Blue, which had its first listening in the city recently.

Classmates at the Asian Academy of Film and Television, the duo noticed each other when DEVM played a few beats and Warboy broke into an impromptu verse. “If I will play metal, he will rap on that too,” shares 20-year-old DEVM who was born and brought up in Mumbai.

“His music is extraordinary to me, it is not just any ordinary hip-hop music. He is an EDM producer as well, so the elements from this genre often make way to his hip-hop music which makes it unique,” adds Warboy, who hails from Dharamshala.

As a result of their win, the duo was allowed to record their full-length album at a professional studio with a music producer from America named Bixtel. Warboy wrote the track Ek Choti Si Umeed, which is now streaming along with the video, after being inspired by his own life.

“For instance, the lyrics, ‘Hassena bharri hai mere khawab main, lekin bhudi maa padi bimar mere samnay. Uska beta hai busy apnay kaam main.’ Back in school, friends would talk about girls all the time, and at home, my ailing grandmother lives with us but my uncles never visit her. Since I like to be alone most of the time, I took that pain and let it flow into my lyrics,” shares the rapper, adding, “While writing, the only thing I keep in mind is to not forget where I come from — my roots. I like to evoke the deepest of emotional feelings in people with my lyrics, that have been suppressed for long.”

Whereas for DEVM, a song has to sound good while being able to strike a chord with people. “It should be something with which people can relate on a day-to-day basis,” says the Mumbai native, who loves to break any music into its various components for better understanding.

“I look into the elements used in a particular song. When I listen to a song, I segregate the technicalities. Like how you taste food and identify the various elements used, I do that to music. I also try and make sure that the music fits into the mood of any audience,” he explains.

What makes their collective music appealing is their similar music taste, as well as their interest in hip-hop which stemmed from encouragement from friends. While Warboy started out listening to Tha Carter III by Lil Wayne, DEVM started with metal but is open to any kind of music. “Currently, I am listening to Tool, a band known for progressive rock music, and I’m making him (DEVM) listen too,” shares Warboy.