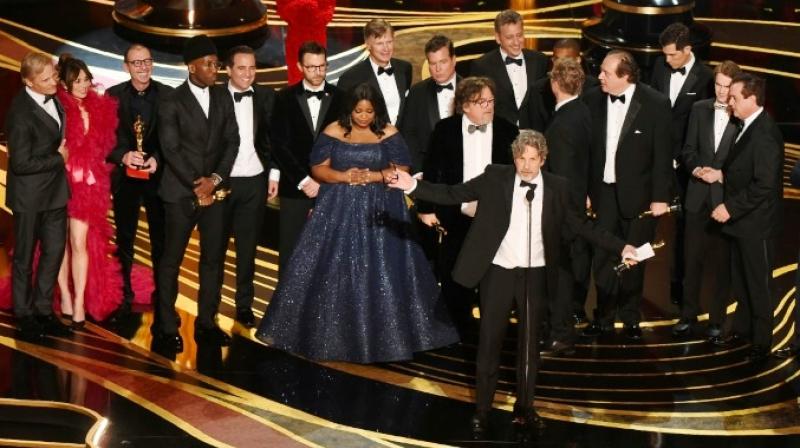 Los Angeles: The Oscars celebrated diversity with a string of wins for minority nominees, but the night's message was undermined by a bitter controversy simmering Monday over the best picture winner, civil rights dramedy ‘Green Book.’

The victory for Peter Farrelly's true-life story of a gay black pianist, who strikes up an unlikely friendship with his Italian-American driver in 1960s America lit up social media, sparking a savage backlash over what critics see as its "whitesplaining" racial politics.

Veteran African American filmmaker Spike Lee stormed briefly out of the auditorium as the top prize at the 91st Academy Awards was announced on Sunday, later hinting that he thought it was a historically poor choice.

Lee was dumbfounded back in 1990 when ‘Driving Miss Daisy,’ a movie deemed by many to be egregiously tone deaf on race, won best picture while his widely lauded ‘Do the Right Thing’ couldn't even muster a nomination.

Three decades later, Lee was in the running for best film with ‘BlacKkKlansman’ and appeared exasperated to lose to another film about race relations set largely in a car.

"I'm snakebit, every time someone's driving someone, I lose," Lee half-joked backstage, visibly frustrated despite taking home a consolation prize, an Oscar for screenwriting, his first in a competitive category.

An evening overshadowed by a controversy over race had a fitting coda when Lee, after pleading for US voters to "be on the right side of history" when they vote in the 2020 presidential election, took a Twitter beating from Donald Trump.

"Be nice if Spike Lee could read his notes, or better yet not have to use notes at all, when doing his racist hit on your President," Trump tweeted Monday, although he hadn't been named by the director.

The top prize, the third statuette of the night for 'Green Book', came after its star Mahershala Ali, an African American and two years ago the first Muslim to win an acting Oscar, bagged the prize for best supporting actor. The film, an audience favourite that has taken more than USD 140 million in box offices worldwide, it has been embroiled in controversy since its premiere.

The real-life family of Ali's character, the late pianist Don Shirley, denounced the film as a "symphony of lies" while others described it as yet another "white saviour movie." Ali's co-star Viggo Mortensen was hardly a balm to the roiling controversy when, during a Q&A on the film in November, he used the N-word.

On the surface, the academy's selections on Sunday looked about as diverse as could be expected, with superhero blockbuster "Black Panther," a movie with a mainly black cast, scooping three awards.

Three of the four acting prizes went to African Americans and an Egyptian first-generation American, while black women won in costume design and production design for the first time, both for "Black Panther."

Richard Brody argued in The New Yorker, however, that the "repellently obtuse" "Green Book" proved the academy had changed nothing meaningful since being berated over the 2016-17 #OscarsSoWhite controversy.

Peter Bradshaw of The Guardian found that the "well-intentioned white/black balance" came across as glib, while the London-based Independent website bemoaned its "relentless, almost uncanny mediocrity." 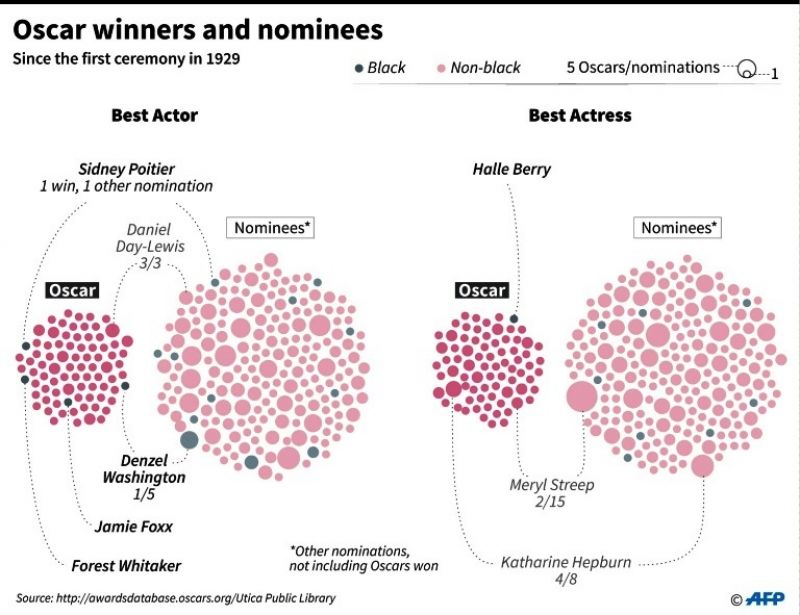 Representation of past Oscar winners and nominees. (Photo: AFP)

As is often the case, there was a backlash to the backlash, from commentators complaining of an industry crippled by its fear of offending audiences and an obsession with the appearance of political correctness rather than genuine reform.

Conservative entertainment blog Hollywood in Toto, which considers Tinseltown's liberals as something of a bete noire, described the bonding theme in "Green Book" as "noble." Toto evoked the allegedly faked recent hate attack on black "Empire" actor Jussie Smollett to argue that the US movie industry is often too quick to see racism where none exists.

"Saying movies like 'Green Book' make white movie goers feel better is insulting," said editor Christian Toto. "Why would you need to be white to enjoy a beautifully told story about moving past one's bigotry?"

The number of minority actors with lead roles in films increased from 13.9 per cent in 2016 to 19.8 per cent in 2017, a far from perfect statistic but a sizeable improvement, nonetheless. "It sounds absurd to suggest people who claim to be against racism, like woke liberals in and out of Hollywood, would be against a film that promotes racial healing," said Toto.