Meet 40 year old Johny who has been cycling from one state to another in his mission to make more people embrace riding cycle. 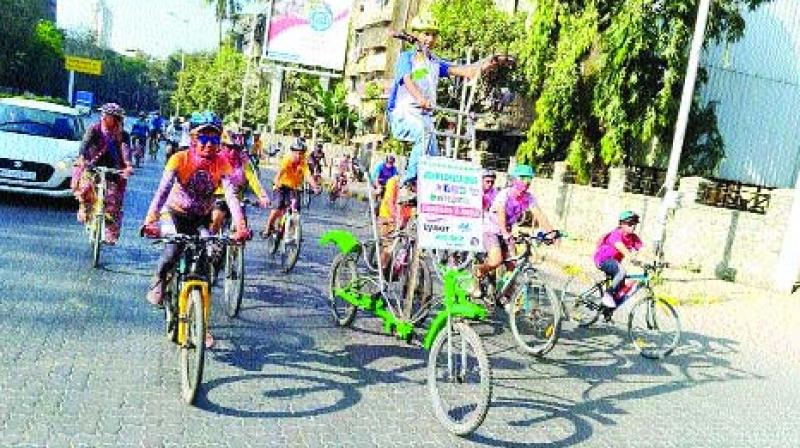 A cyclist for 24 years, Johny has a Limca Book of Record for completing Chandigarh to Delhi in 16 hours on his seven feet tall cycle in 2001.

They say, a dream doesn’t become reality through magic; it takes sweat, determination, and hard work. The journey of 40-year-old cyclist Rajiv Kumar ‘Johny’ is a testimony to this saying, as the Chandigarh-based cyclist successfully completed his expedition from the Union Territory to Mumbai in a period of one month and 20 days on his nine feet tall cycle.

Flagged off by the Governor of Chandigarh V P Singh Badnore, Kumar started pedalling on February 1st and reached the city of dreams just a few days before Holi. Having started cycling over two decades ago, Johny has ridden to several cities around Chandigarh with quite a few records to his name. In pursuit of adding another record to his list, Johny took this expedition to fulfill his 20-year-old dream of meeting Salman Khan and also to spread awareness on saving the environment.

“My motive to ride is to spread awareness on saving the environment and instill in people the habit of picking up cycle to commute as it will help in reducing the air pollution. The younger generation doesn’t use cycle, they feel ashamed but I would request the office-goers to use cycles to go to work instead of cars. This way both health and environment will get a boost,” says Johny. A die-hard Salman Khan fan, unfortunately, he couldn’t meet the actor as he is traveling out of the country.

A cyclist for 24 years, Johny has a Limca Book of Record for completing Chandigarh to Delhi in 16 hours on his seven feet tall cycle in 2001. “I have travelled on cycle from Chandigarh to Ludhiana, Navasher to name a few,” says Johny who plans to break his own record after pedalling the distance of 1,654.8 km on his self-created bike.

What is equally attractive to his unique expedition is his nine-feet green-coloured cycle. The design of the cycle is inspired by the emblem of Government of Chandigarh that features the Open Hand Monument symbolising ‘the hand to give and the hand to take; peace and prosperity, and the unity of mankind’.

“It a 2013 model and weighs around 68-70 kg. It is an adjustable bike and can be dismantled and carried anywhere. The reason I made it this huge was to attract attention. With a simple cycle, I will not catch many eyeballs,” shares the cyclist.

Since his sojourn in the city wasn’t a planned one, everything happened unexpectedly leaving a lasting impression on him. “The day I entered Mumbai, I visited a Sai temple. Then cycled my way to Goregaon Film City. There I requested my way into Kapil Sharma Show. Kapil promised me that he will make me meet Salman once he is back in the country,” smiles Johny who runs an air conditioning business in Chandigarh.

Though he couldn’t meet Salman, a stroll outside his house introduced him to the Bicycle mayor Firoza Suresh who then invited him to their Holi ride. “In short, coming to Mumbai was the most fulfilling experience of my life. I met some really nice people,” he shares.

His next creation has surpassed the sketching stage and is set at an estimated cost of Rs 4 lakh. Johny is preparing this cycle for his most crucial voyage of Kashmir to Kanyajohnyi, for which he is in talks with sponsors.

“It will be very different from the one I rode now. It will weight around 20-25 kg. With this, I want to set a record for Guinness World Record and make my nation proud,” he concludes.