Commoners who have married into royal families

Here are some recent marriages involving royals and commoners. 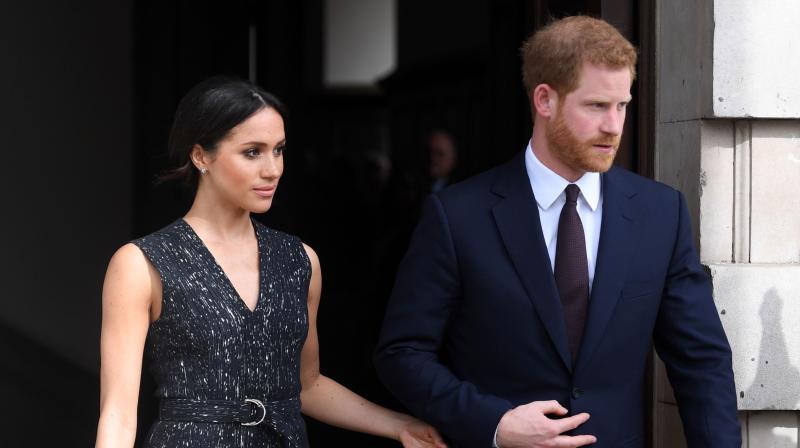 Britain's Prince Harry (R) and his US fiancee Meghan Markle leave after attending a memorial service at St Martin-in-the-Fields in Trafalgar Square in London, on April 23, 2018, to commemorate the 25th anniversary of the murder of Stephen Lawrence. (Photo: AFP)

LONDON: In just over three weeks, U.S. actress Meghan Markle will join a select group of "commoners" to marry into a royal family when she weds Britain’s Prince Harry at Windsor Castle.

Markle, 36, follows the likes of Kate Middleton, who married Harry’s elder brother William in 2011, and another American actress Grace Kelly who gave up her Hollywood career to become wife of Prince Rainier III of Monaco.

Here are some recent marriages involving royals and commoners:

Hollywood icon Grace Kelly, star of films such as “To Catch a Thief” and “Dial M for Murder”, retired from her acting career to marry Rainier, the sovereign of the principality, on April 18, 1956 after the pair met at the Cannes Film Festival a year earlier. Kelly died in a car crash in 1982 and Rainier died in 2005.

Japan’s Princess Takako Suga, the youngest daughter of Japanese Emperor Hirohito, married financial analyst Hisanaga Shimazu in Tokyo in 1960. She gave up her imperial title and relinquished her status to be a commoner, adopting her husband’s name to become Takako Shimazu.

American socialite Hope Cooke married Palden Thondup Namgyal, Crown Prince of Sikkim, on March 20, 1963. She went on a summer trip to India and met him in 1959 in the lounge of the Windamere Hotel in Darjeeling. He was a recent widower with two sons and a daughter and was nearly twice Cooke’s age.

She renounced her American citizenship after the marriage and Namgyal later ceased to be king after the region was absorbed as a state of India in 1975.

Sonja Haraldsen dated then-Crown Prince Harald of Norway for years before he told his father King Olav V he would never marry anyone but her, putting the throne in jeopardy as Harald was the sole heir. They wed on Aug. 29, 1968, after King Olaf consulted the government and allowed the engagement.

Queen Silvia of Sweden was working as an educational host at the 1972 Olympics in Munich when she met the then-Crown Prince Carl Gustaf. She married the now King on June 19, 1976.

Doctor’s daughter Rania Al-Yassin, born in Kuwait to Palestinian parents, met Jordan’s Crown Prince Abdullah II at a dinner party. She studied in Cairo, and worked for Citibank and Apple in Jordan. The couple married in 1993 and Abdullah assumed the throne in 1999.

Masenate Mohato Seeiso was the first commoner to marry into the Royal Family of Lesotho. She married King Letsie III in Maseru on Feb. 18, 2000.

Norwegian commoner and single mother, Mette-Marit Tjessem Hoiby, married Crown Prince Haakon of Norway on Aug. 25, 2001. They had met at a music festival in the late 1990s.

Maxima Zorreguieta, a former investment banker from Argentina, met Dutch Crown Prince Willem-Alexander in April 1999 in Seville, Spain, during the city’s Spring Fair. Her father had served as Argentina’s Minister of Agriculture during the violent regime of General Jorge Rafael Videla. They married on Feb. 2, 2002, and became King and Queen of the Netherlands in 2013 after Willem-Alexander’s mother Queen Beatrix abdicated. Maxima was the first Dutch queen consort since 1890.

Australian Mary Donaldson met Crown Prince Frederik of Denmark at the Slip Inn during the 2000 Summer Olympics in Sydney. They married in Copenhagen on May 14, 2014.

Letizia Ortiz Rocasolano was a divorced journalist and well-known news anchor before marrying Spain’s Prince Felipe on May 22, 2004. She became Spain’s first commoner queen in June, 2014, when her husband was sworn in as king. Ortiz, daughter of a journalist and a nurse and the granddaughter of a taxi-driver, dated Felipe in secret before their engagement was announced in November 2003. They met at a dinner organized by a journalist friend.

Prince Joachim, fourth-in-line to the Danish throne, met French-born Marie Agathe Odile Cavallier at a private hunt in 2002. In 2005, Joachim divorced his Hong Kong-born wife Alexandra, with whom he has two sons, by mutual consent. The prince proposed to Cavallier while they were on vacation in Turkey, and the pair married in May 2008, at a tradition-steeped ceremony in an ancient church in the tiny village of Moegeltoender. Cavallier became known as Her Royal Highness Princess Marie.

Tatiana Blatnik, born in Caracas, Venezuela, and raised in Switzerland, was an event planner for Diane von Furstenberg before marrying Prince Nikolaos, son of Greece’s deposed King Constantine, in 2010. The couple married in a lavish wedding ceremony on the island of Spetses.

Charlene Lynette Wittstock was born in Bulawayo, Zimbabwe in January 1978. She competed for South Africa at the 2000 Olympics before marrying Prince Albert II of Monaco on July 1, 2011.

The couple began dating in 2006 and married in an opulent ceremony in Monte Carlo attended by European royalty and the international elite. Prince Albert is the son of Grace Kelly.

Jetsun Pema was just 21, when she married the 31-year-old Oxford University-educated king. She is viewed as a style icon across much of Asia and gave birth to their first son, the crown prince, in February 2016.

Sofia Hellqvist was a model and reality TV star before she became Princess of Sweden when she married Prince Carl Phillip on June 13, 2015

Kate Middleton, whose father is a pilot and mother an air stewardess who later set up a mail order business, met Britain’s Prince William while at St Andrews University in Scotland in 2001. They married on April 29, 2011, with Kate becoming the first commoner in more than 350 years to wed a prince in such close proximity to the British throne.