A hiking trek takes you to the highest point in Mumbai that also has a panoramic view of the city’s three lakes. 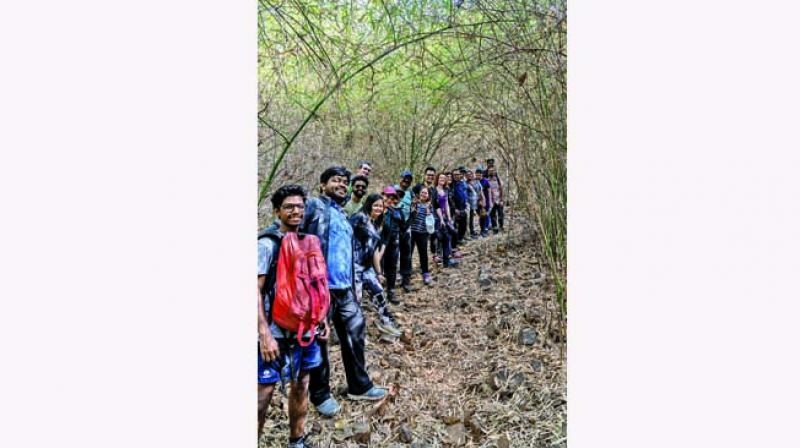 Trekkers on the trail

Within the 103.84 km2 protected area of Sanjay Gandhi National Park is Mumbai’s highest point Jambulmal, at a staggering height of 468 meters (1535 ft) above sea level. Starting from the foot of Kaneri caves in the national park, the trail unfolds into nature’s pandora box and gives a panoramic view of the city’s three lakes— Vihar, Tulsi and Powai.

Organised by Jack & Hill Adventures’ founder Johann Daniels and wildlife expert Nikit Surve, the hike begins at 7.15 in the morning, from the foot of Kaneri caves. “We hike for two-three hours. It is an interesting trek to do because it is within the city and you also get a panoramic view of the city from atop,” shares Daniels.

As soon as one starts to hike, you will see Gorai, Manori and the Global Vipassana Pagoda. As you gain height, one sees the beautiful coastlines along Mira-Bhayandar to Kandivali. Finally taking you to the highest point from where you see the lakes.

But the most gripping views from up there, the organisers tell us, are the three lakes — Tulsi, Vihar and Powai lakes along with a panoramic view of Powai to Dahisar.

“It is a spectacular view of the city. Everyone we have taken up there has exclaimed that they can’t believe they are in Mumbai. The two lakes Tulsi and Vihar fulfill the 10-12 percent of drinking water requirement of the city and people get to see that.  We also keep telling people when to stop at a certain point,” says Surve.

Daniels further informs that on the trail with Nikit, one also gets to learn about the flora and fauna of the jungle. “We try to spot and identify the flowers and animals we come across which turns into a very enriching experience. Whoever comes on the trek also learns about the leopard that exists within our city,” says Daniels.

From birds such as bulbul and greater coucal, you will get to see langoors, bears, deers, snake and leopards  — only if you are lucky enough. “Last time we heard the alarm call which was given by a langoor for a leopard that was in our vicinity. But that leopard definitely got sacred because of us and went into hiding,” recalls Surve.

With not more than 10-15 people in one batch, the idea is to disseminate information about our environment while not disturbing the wildlife. “We do that so the learning is justified, because if there are too many people, then the spotting lowers. If there is too much disturbance, then people can’t see the animals quickly because they run away once they notice human movement. In smaller numbers, we ensure quality over quantity,” lists Daniels.

In terms of precautions and instructions, the organisers apart from telling the participants to wear the right shoes have a few more items on the list.

“A hat because it is summer and one-two litres of water. For clothing, obviously what is comfortable for hiking, but mainly we tell them to wear clothes that camouflage with the environment, looking at natural colours like brown and green,” adds Dainels.

Most importantly, the participants are strictly instructed not to pluck anything from the jungle. “We also ensure that we don’t litter and quite often carry bags to clean-up the trek. Apart from that, it is of utmost importance to stay quiet because that is the only way you can see the animals around.  We are the prey intruding in their personal space so their natural instinct is to hide. Also, we need not be scared of the encounters with the animals, because it not natural for them to attack us,” concludes Daniels.