To endorse or not – the China dilemma

The anti-China sloganeering has reached a crescendo, but with big bucks riding on endorsements can and will people really cut out China? 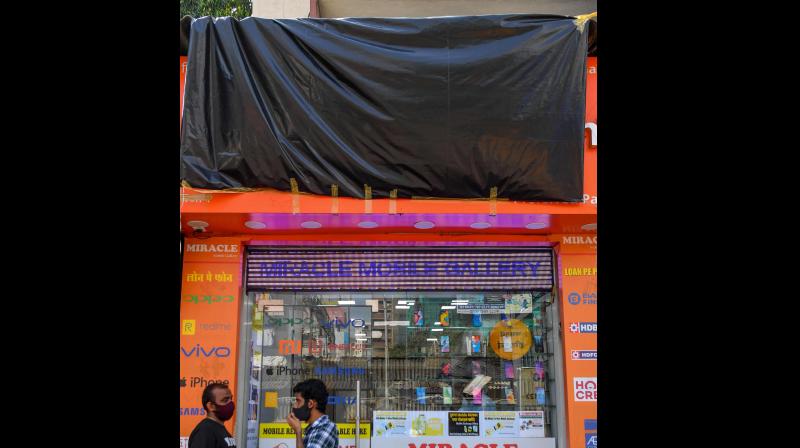 People stand outside a shop selling mobile phones from Chinese electronics company Xiaomi of which the front name is covered with a tarp, as calls for a boycott of Chinese goods gather pace following a border clash that killed 20 Indian soldiers, in Mumbai. PTI Photo

As the public furore calling for a boycott of Chinese products in the country continued for the second week, celebrities endorsing Chinese products have come under a lot of criticism. While a few point out that it is not fair to look through the prism of nationalism and judge these celebrities, the majority demand that the celebs revise their commitment to plug these products.

According to Mumbai based Indian Institute of Human Brands (IIHB) the majority of Indians are against celebrities endorsing Chinese products.

On the other hand, is it really possible to stop China’s supply chain in India? Considering the footprint China has on Indian economy, especially the multi-million deals in the information and electronics industry and sports, it does seem like wishful thinking. None of the celebrities or players have reacted publicly to the situation and this has fuelled public anger.

The public demand for boycotting Chinese products has put the celebs in a dilemma because the amount of revenue is humongous. India is the fastest growing smartphone market in the world, and one of the cash cows for Chinese brands.

Aamir Khan and Sara Ali Khan endorse Vivo mobile phones, Virat Kohli recommends IQOO, Deepika Padukone, Sidharth Malhotra, rapper Baadshah and Ranbir Kapoor popularise Oppo, Ranveer Singh does the same for Xiaomi, and Salman Khan, Shraddha Kapoor and Ayushmann Khurrana for Realme. Li Ning is another Chinese brand which has deals with the Indian Olympic Association and for Rs 48 crore, it has signed on PV Sindhu as their brand ambassador for four years, a record deal for an Indian badminton player.

Experts say it is difficult for BCCI to reconsider sponsorship deals since it has numerous sponsors like Vivo, Byju's, PayTM and Dream11 with direct or indirect links to China. Some of the sponsors have pumped in heavy doses of cash over the years, Vivo being the highest investor, with over Rs 400 crore worth of deals. However, the apex board of cricket in India may review future sponsorships.

Government should show the way

Adithya Roongta, Immediate Past Chair – Young Indian’s Chennai Chapter says  “I think it would be unfair to look through the prism of nationalism or patriotism and judge celebs on their endorsement of Chinese products. Having said that, personally I wish they stop further endorsements post completion of their contractual obligations. But the government of the day needs to come out with a clear policy decision and the nation will follow suit.”

India is poised to become the third largest consumer market and Adithya affirms the need of self-sufficiency, saying the country has a great opportunity here to scale up, and industry captains along with the government are already taking tough decisions to steer the country on the path of becoming a global superpower.

Anti-China sentiment has long been present in Indian public opinion due to historical and geopolitical factors. But the government should be wary of the dangers of the anti-China furore, feel some experts.

K.E. Raghunathan, convenor Consortium of Indian Associations (CIA), a forum which represents over 30 associations across India, feels “you cannot isolate a country and take impulsive decisions and fight an economic war. By asking celebrities to stop endorsing foreign products or removing some apps from your mobile or by denying rooms to Chinese, you won’t achieve ‘Aatma Nirbhartha’. What you need is a long-term strategy with short-term steps towards self-dependence.”

Pointing out that industries are yet to recover from the COVID-19 shock and “this is not the right time for us to boycott or look for alternative sources,” he said “it will only affect the ability of entrepreneurs in the country to bounce back. Industrial war cannot be fought with sentiment.

Border wars can be fought with emotions and patriotism but you cannot start and fight an industrial or economical war by emotions. It should be fought with intelligence and strategy.” He however felt the government has taken the right step by including Country of Origin as information in the GeM portal.

Many TikTok users claimed they have deleted their accounts and said they wouldn’t use the Chinese app anymore. But the majority of high- earning TikTok users would not want to do so.

Popular TikTok user Devi Narayanan says “I believe the majority of the TikTokers I personally know have a clear idea of what’s happening around. I don't think it would be a good idea to delete an app to show your rage on what's happening at the border. Many people are earning and have made this as part of their income. If the government decides to bring the app down due to public demand, people will lose money. But many of us are also relying on other platforms too. TikTokers would not restrict themselves in to one app these days I guess.”

More than the government, celebrities and sports bodies will face pressure from the fan base  over the endorsement issue. Given the current financial crisis in the country, it will be interesting to see how organisations like IOA and BCCI will handle the situation.

Indians are among the top users of Chinese apps available on PlayStore. TikTok was the first to face the wrath of Indian users when the anti-China sentiments were fanned into a fire by the face-off on the border. They have not just lost a lot of users from the country but the rating has gone downhill too. However, China based PUBG battle games have been impacted yet.