After that there was no looking back for Neeraj. That perhaps was the Golden Period of Romantic stories in Hindi films. 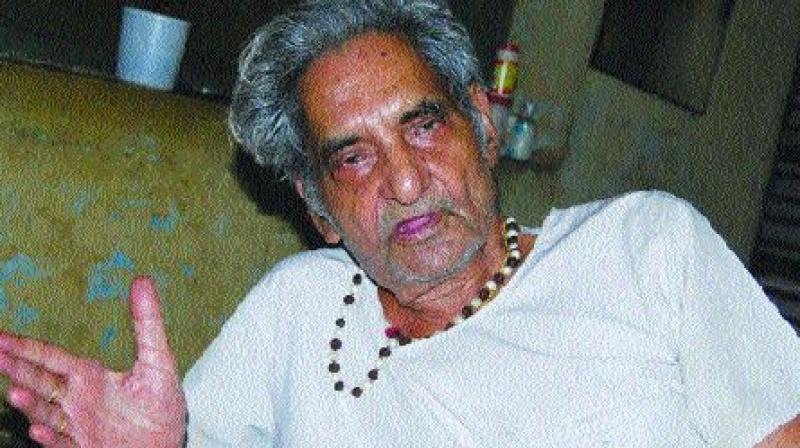 The People’s Poet. Padma Shri 1991, Padma Bhushan 1997. That sums up Gopal Das Saxena, most remembered for his romantic film songs. And this image was acquired in just 7-8 years of his film career. Sample this: “Phoolon ke rang se, dil ki kalam se...”, “Rangeela re, tere rang mein yoon ranga hai mera rang...”, “Jeevan ki bagiya mehkegi...”, “mera man tera pyasa...”. Most don’t know what else he wrote in the other 65-odd years! Having lost his father at the age of 6, he had to suffer the pangs of separation from his mother too, owing to penury. And that gave birth to poetry, and Neeraj —

“Aatme ke Saundarya ka shabd roop hai kavya Manav hona bhagya hai, kavi hona saubhagya hai” Gopal Das ‘Neeraj’ first started writing poetry in English, but it was Harivansh Rai Bachchan who prodded him to write in Hindi since “Kavita maatrubhasha mein hi hoti hai”. He was also “lap topped” by Big B’s dad during the 1940’s when during a trip from Kanpur to Baanda in a bus where Bachchan got a seat and Neeraj didn’t. And there was no stopping once he started writing in Hindi. His Urdu was impeccable too. I also have a feeling that Neeraj would’ve been much more popular for his range, had he written in Urdu and not Hindi.

Apart from Bachchan, Neeraj has the rare privilege of sharing the dais with the likes of Atal Bihari Vajpayee, Firaq Gorakhpuri, Suryakant Tripathi Nirala, Mahadevi Varma, Jigar Moradabadi, Maithili Sharan Gupt, Ramdhari Sinh Dinkar, Sumitranandan Pant, kaifi azmi and the list goes on... Shakeel Badayuni, of course became his soul mate in the Civil Supplies Department, where he got appointed as a Clerk immediately after his schooling. The former too, was a clerk there.

His first brush with film industry was through the iconic Prithviraj Kapoor who during his performance trip to Kanpur heard Neeraj during a kavi sammelan for three hours and couldn’t resist the temptation of inviting the latter to Mumbai. Neeraj, as was his wont, scoffed it off.

Much as he defied Mumbai, the illusive and the ever elusive film world deified him.  One of Neeraj’s poem “karvaan guzar gaya gubar dekhte rahe...” first composed in 1954 had become extremely popular and in 1965 the yesteryear hero turned character artiste Chandrashekhar who happens to be a Hyderabadi was making a film Nayee umar ki nayee fasal, featuring Tanuja.  He invited Neeraj to write the songs for the film. Nayee umar ki nayee fasal was his first film and his poem sung my Mohammed Rafi is still considered a milestone of sorts as far as poetry in films is concerned. The film itself is supposed to be inspired by the title of the popular verse.

After that there was no looking back for Neeraj. That perhaps was the Golden Period of Romantic stories in Hindi films. The composers of that period par excellent, particularly Sachin Dev Burman and Shankar-Jaikishan ruled the roost. Neeraj’s poetry was the icing on the cake. Come to think of it, S.D. Burman was almost dismissive of a poet’s ability to fit into a composition, after Neeraj was introduced to him by Dev Anand as a replacement to Shailendra whose untimely death created a poetic void in Hindi Cinema.

The love-hate relationship with the composers however continued in the literary spirit, and another gem “ae bhai zara dekh ke chalo...” from Mera Naam Joker was born, defining life’s philosophy like never before, or after; much like the film itself. It was during this period that Raj Kapoor challenged Neeraj’s luminescence and insisted on changing words in a song. When he refused to yield, the great showman tried to corner him “Neeraj ji ek baar bambai mein aagaye to jeena yahan marna yahan iske sivaa jaana kahaan...”.

Neeraj retorted that he’s living in a fool’s paradise and that those who are incapable of doing anything else only cling on to this film world, “I’am a hero in my own way and don’t depend on the film industry for my survival...”.

The onslaught from the new breed too was relentless, and coupled with the death of S.D. Burman, Jaikishan and others made him even more disillusioned and depressed; and in 1973 bid adieu to the film world.

Aligarh is where he still lives, at 91, all by himself with an attendant in tow. Twice widowed, he spends his time reading and replying to the sackful of fan mail he receives everyday much to the chagrin of the postman. He today rues the fact that he wasted a lot of time in replying to each and every letter, which were mostly written by women. Stories abound about how students from girls’ hostels used to smuggle him inside their hostels for a night long recitation of his prem geet. Back then, his Mrutyu Geet virtually had the audience swooning. Unable to bear the pain, the audience more often than not urged him not to recite that piece.

Neeraj came back to write at the insistence of his best buddy and “the best man in the film world”, Dev Anand for his film Charge Sheet which eventually turned out to be the laterr’s swan song as well. The song “mera ishq bhi tu, mera pyar bhi tu...” had Sufi overtones. Neeraj himself believed in piety and not religion. These lines best describe his leanings —

Few in the world have the credit of being at the pinnacle of poetry for more than 70 years. So fond of smoking, alcohol and poetry even today that he recites the following with great fervour, while taking a pot shot at the declining standards of poetry today —