A new performance space has poetry enthusiasts coming together to collaborate on haikus.

In the bustling neighbourhood of Bandra, there survives the memorabilia of the old Bombay, in the form of what was an agricultural and a fishing hamlet. Ranwar village has its cultural beauty  preserved only with few remaining cottages, while the shadows of the surrounding towering apartments have begun to engulf them with the darkness of urbanisation. On taking a walk from the narrow Nagrana Lane from the Hill Road, one may be scandalised by some of the graffiti on the walls.  But as you reach the end of it, the graffiti changes, and you will find yourself standing next to an old building covered by red, yellow, and orange coloured illustrations, the credit for which goes to Bade Moochwale art collective.

HaikuJAM Cottage is a physical extension of the app HaikuJAM, a social writing app that allows its users to complete each other’s lines to create haikus and exchange thoughts and ideas. Originating from ancient Japan, Haikus are a form of unrhymed three verses with the syllabic format of five-seven-five syllables respectively.

The cottage that was supposed to be the office for these poetically driven tech whiz, is turned into a performance and collaborative space for people to come together and draft haikus. Talking about the cottage, Diana Babei, the communications, events & partnerships lead, says, “HaikuJAM Cottage started off as our office. Passers-by got very curious about the space and would often stop for a chat and tea. Many of our community members would also come over to hang out, meet the team and see where we work. So we decided to open it up to the public.” Diana adds that the team decided to create a physical extension of what happens in the app with the HaikuJAM Cottage, and give people a creative safe-space where they can be themselves and meet new people. 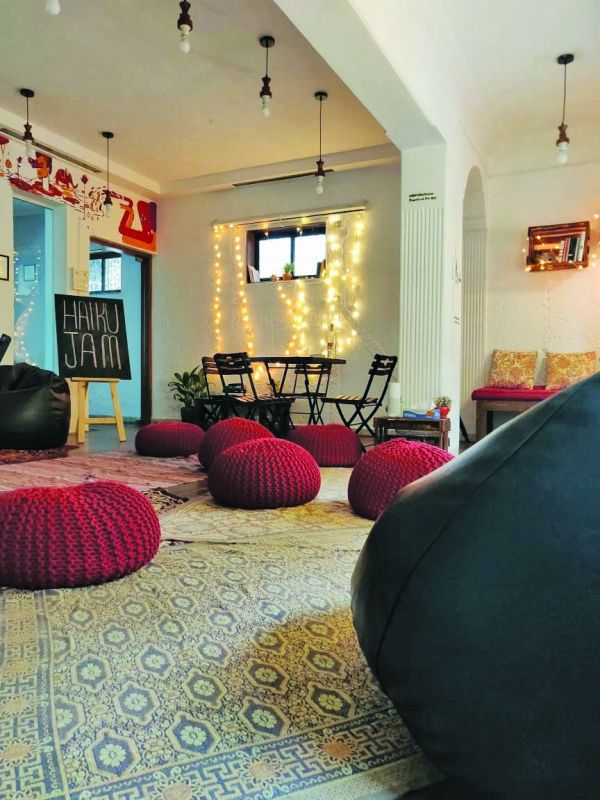 Additionally, every Saturday, the cottage also functions as a café, where the ground floor becomes HaikuJAM Cafe, where you can ‘buy’ drinks and snacks by writing a couple of words of haiku poem.  They also curate their own events on the last Saturday of every month and let other cultural organisations host their events here for free.

Spilling the beans on the past events, Diana says, “Our first event Don’t Talk To Strangers included a collaborative spoken word performance by Spill Poetry, music and jamming with strangers. The second event Rap Khel gave our guests the opportunity to play word games and jam with hip-hop collective Bombay Lokal, who then turned their haiku poems into freestyle rap verses.”

Adding to these innovative streak of events, the cottage is going to host an event called Kitchen Haiku on September 1. “Historically, Haiku writing was a very popular amongst women in ancient Japan. Since they could rarely leave their home, the subject matter of choice was often domestic and food-related. That’s how kitchen haiku originated”, informs Diana.  They revive food as subject matter for poetry and explore it as a complex, personal and often overlooked part of peoples’ lives.

The event will see the coming together of food tasting and writing poetry about the same. “The guests will not just taste, but experience a variety of familiar foods with all of their senses, and get to reflect on associations and memories they evoke. They will then share stories and write haiku poetry together about the food-tasting experience”.

Kitchen Haiku will be held at HaikuJAM Cottage on September 1, from 7pm to 9pm.