While bizarre corpses have been branded fake by other scientists, Dr Vivanco said that there details that indicated that bodies are real. 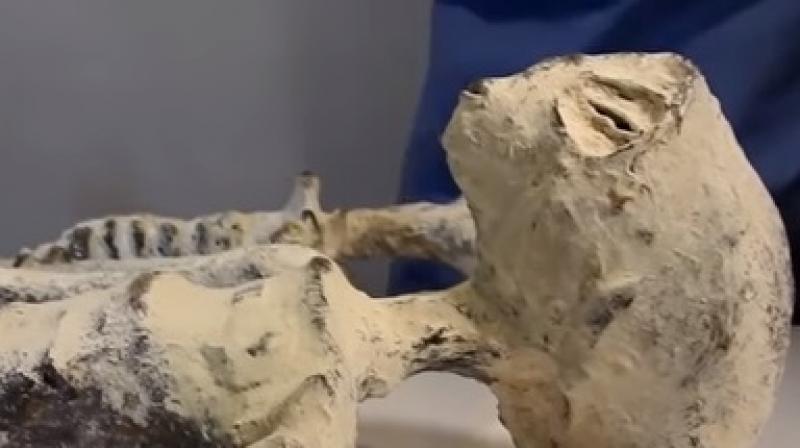 Scientists have not found anything fraudulent in the bizzare looking skeletal remains. (Photo: Youtube Screengrab)

The set of ‘alien mummies’ that were recently discovered in Peru, are, real, according to a scientist who is part of team researching the remains.

Skeletal specialist, Dr Edson Vivanco said that the 1,700-year-old mummies of Nazca found in the South American country are actually remains of “non-human brings,” according to a Daily Express report.

While the bizarre three-fingered and three-toed corpses have been branded fake by other scientists, Dr Vivanco said that there are lots of details that indicated that the bodies are real. According to him, "To recreate a skull with these characteristics is a very difficult task."

The scientist insists if they were fake, he would be the "first to say and report it".

He further added, while they are studying the evidence, they have not found anything fraudulent in them. "We have lots of evidence that sets us on the path to prove that this is real."

Footage of the so-called mummified alien was released in June in the ancient city of Nazca, Peru.

The video was posted by website Gaia.com which charges curious users money to view their exclusive paranormal content.

According to the site the extraterrestrial beast’s body was dug up during an excavation of the mysterious caves.

Many critics slammed that the ‘corpse’ looks like it is a half-finished cardboard creation.