Should India get credit for Da Vinci's 'Vitruvian Man'? 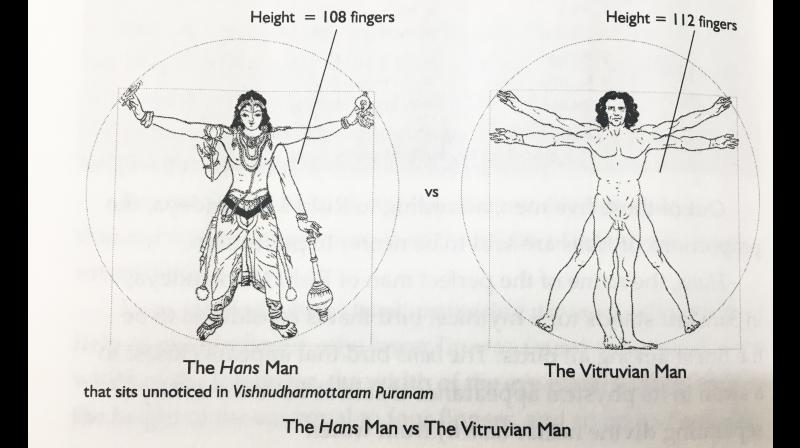 Da Vinci himself credits 1st century BC Roman architect and engineer Marcus Vitruvius Pollio, as the first exponent of this idea, in his 13-30 BC book, Des Architectura.

In a research revelation like the origin of zero or Fibonacci series from India, Oxford scholar Ashish Jaiswal in his book ‘fluid’, has proposed that the  celebrated drawing ‘The Vitruvian Man’ by Leonardo Da Vinci may actually have its roots in India.

Da Vinci’s celebrated work on the dimensions of the human form, ‘The Vitruvian Man’ created around 1490, is a beautiful convergence of artistic, scientific and mathematical knowledge. Since 1822, the Vitruvian Man has been a part of the permanent collection of the Gallerie dell’Accademia in Venice, Italy. It is considered ‘priceless’.

Da Vinci himself credits 1st century BC Roman architect and engineer Marcus Vitruvius Pollio, as the first exponent of this idea, in his 13-30 BC book, Des Architectura- in the chapter Temples and the Human Body. Interestingly, out of roughly 22 measurements noted by Vitruvius, Da Vinci uses less than half, interpreting the remaining measurements himself.

But here’s the twist. According to author Ashish Jaiswal, Vishudharmottaram Puranam  - the not so well known ancient Indian text contains, the first ever, extensive measurements of the perfectly proportionate human body. And despite the fact that western writers have known it, they have never given it due credit.

Ashish Jaiswal explains, “I find it astonishing that no one has previously established the connection between the perfectly proportioned human form in Vishudharmottaram Puranamand Da Vinci’s Vitruvian Man. In fact, celebrated art historian Stella Kramrisch, who translated the Vishnudharmottaram in 1928 and who must be aware of The Vitruvian Man doesn't acknowledge the depth in which the proportions of the human body have been explained in the ancient text.”

It is true that there is hardly any awareness of this encyclopaedic like puran in the public domain.

Rishi Markandeya uses the width of a single finger as a standard measuring unit to measure human body; as opposed to Vitruvius, who largely uses the length of the head. The significance of this is that Rishi Markandeya is able to give measurements of smaller body parts (for example, Rishi Markandeya notes that the length of front tooth of a perfectly proportionate human is half a finger wide). ‘This is a long lost discovery that must be brought out,’ adds author Ashish Jaiswal.

Ashish outlines further that the act of dismissing or ignoring India’s achievements has been observed before as well, citing how the architect of Delhi, Edwin Lutyens considered the “Taj Mahal to be wonderful but not architecture.”

Ashish Jaiswal has a doctorate from Oxford University and incidentally was a few years junior to the historian writer Yuval Noah Harari.