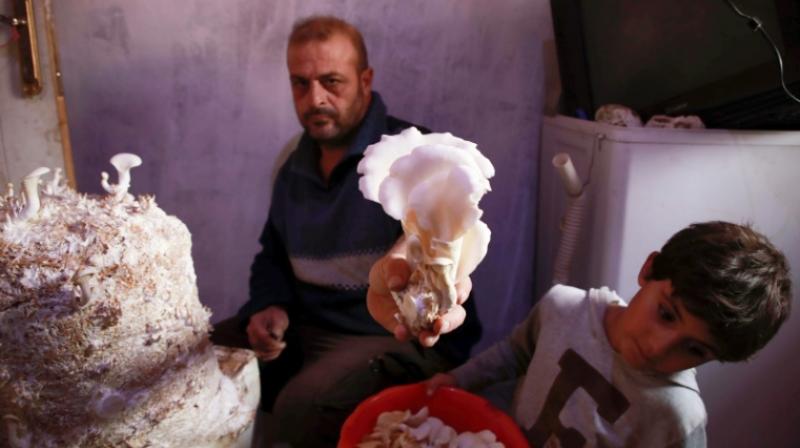 After the civil war erupted in Syria eight years ago, Nasrallah started growing the fungi in his home province of Hama. (Photo: AFP)

In a camp for the displaced in northern Syria, Nasrallah scatters mushroom spores into a bag of wet hay, hoping they will sprout and feed his family.

"Mushrooms have become the main alternative to meat, as it's so expensive," says the 43-year-old. After the civil war erupted in Syria eight years ago, Nasrallah started growing the fungi in his home province of Hama.

"We'd eat some, give some away to friends," explains the father of three, who used to work for the local council in the town of Qalaat al-Madiq. But earlier this year, increased regime bombardment on the Hama region forced his family to flee north towards the Turkish border.

They found refuge in a camp in the town of Haarem in the northwestern province of Idlib, but jobs there are scarce. With money tight to support his wife and children, he planted some mushrooms.

"We eat some and we sell a little to provide for ourselves," he says. Before planting the fungi, Nasrallah sterilises hay by stirring it in boiling water over a wood fire.

He then layers the wet straw into a bag, sprinkling five to ten grammes of mushroom spores between each coating. Sealing the bag with a tight knot, he lugs it into a dark, warm room and leaves it for around 20 days.

Once the bag has turned white, he transfers it to a slightly brighter room, opens it up, and mists the top regularly until mushrooms sprout out. "Not many people grow mushrooms, though people -- especially in camps -- are increasingly turning to them," he says.

Mushrooms are commonly viewed as an alternative to meat in dishes, although they are different in nutritional value. They contain far less protein, but more minerals and vitamins. Syrians in other parts of the country have also grown them during the war, most notably in the Damascus suburb of Eastern Ghouta when it was under a five-year government siege.

Around 6.5 million people in Syria are food insecure, or lack access to sufficient nutritious food. Many of them have been displaced from their homes by the conflict, the World Food Programme says.

Today, Nasrallah buys a kilo of spores from Turkey for the equivalent of USD 10, hoping they will generate 20 kilos of food. But he spreads out his yield, picking no more than five kilos a week.

Each kilo sells for a little under the equivalent of USD 3, far less than the average USD 13 per kilo for meat. Inside the brighter cultivation room, his nine-year-old son, Saeed, watches as Nasrallah carves off a huge sprout of creamy oyster mushrooms from a sack.

In the street outside, 65-year-old Umm Khaled takes a quick look at the merchandise and picks it up for a few bank notes. Inside her modest mudbrick home, she chops the mushrooms up and cooks them over a camping stove with some onions and ghee.

"To be honest, chicken and meat are better, but we can't afford them," says the elderly woman, who cooks for her son and grandchildren. Gathering around the dishes, she and her family rip up flat bread and dip it into the vegetables instead.