Radhika G.R., from Hyderabad, is the first Indian police officer to climb the top 10 Australian peaks. 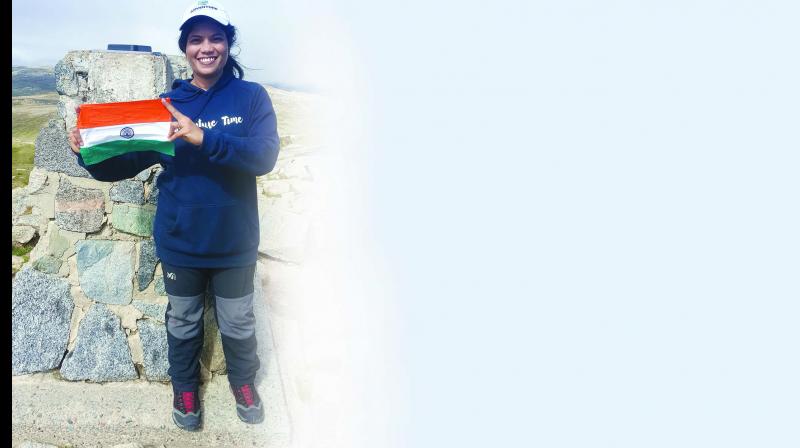 Scaling great heights: Radhika G.R. stands tall with the Indian flag after climbing one of the 10 Australian peaks.

Radhika G.R., who recently became the first Indian police officer to climb the top 10 peaks of Australia, describes the expedition as “the most euphoric experience” of her life. As part of the ‘Aussie 10 peak challenge’, Radhika climbed Mt Kosciuszko (2,228 metres) — the tallest peak in Australia — among other peaks such as Mt Townsend (2,209 metres), Mt Twynam (2,195 metres), Mt Rams Head (2,190 metres) and Mt Alice Rawson Peak (2,160 metres), earlier this month.

The Additional Superintendent of Police had previously set a record for being the first civil woman police officer in the world to climb Mt. Everest. She has also completed the coveted Seven Summits challenge. The 42-year-old, who was recently posted as the principal of the Police Training College in Hyderabad, says, “Five of us from the city planned to complete the challenge, but the others backed out. This became my first solo expedition outside the country. Once in Canberra, I continued the expedition with a few local women.”

Radhika completed the challenge in just two days while people usually take two-and-a-half or three days to complete it. “Physical fitness is important, but being mentally strong is the key. Since some part of the terrain had plants growing on the ground, I had to apply extra pressure. Some peaks were also covered with boulders. Being a vegetarian, planning my diet to get enough calories was a challenge. I survived on lettuce, boiled pumpkin, apples, potato chips and chocolates,” she says.

To stay fit, Radhika runs and cycles daily. She says that her husband and two sons are her support. “My sons research about the place I plan to visit and tell me what I shouldn’t miss. They plan to accompany me on my future expeditions,” she says.

Radhika, who took an interest in mountaineering in 2012  has been asked several times what she gets by risking her life. To this, she says, “You don’t gain anything, you lose your ego.”