These city kids are all set to raise India’s flag at NASA!

Competing for a coveted prize at Nasa’s fourth Human Exploration Rover Challenge, the team travelled to Huntsville, Albama on Sunday. 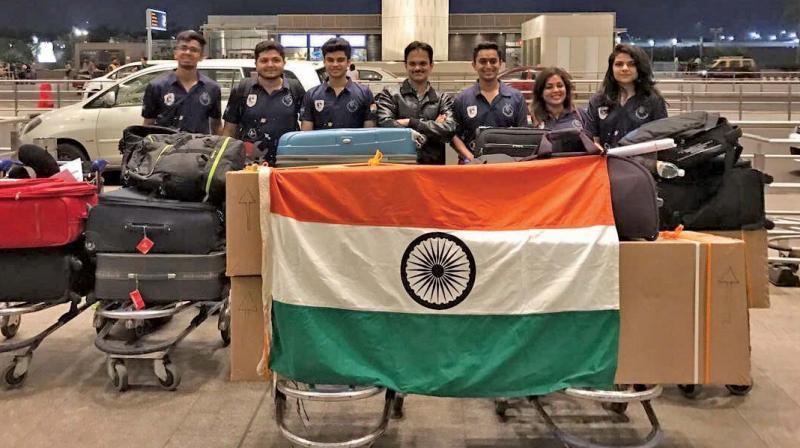 A team of six engineering students from the city will represent India at the prestigous Human Exploration Rover Challenge organised by NASA.

Taking a trip to NASA is the stuff of dreams for many. But for a team of six engineering students from Mukesh Patel School of Technology Management, NMIMS — or Technovators as they call themselves — this dream has finally turned into reality. Competing for a coveted prize at Nasa’s fourth Human Exploration Rover Challenge, the team travelled to Huntsville, Albama on Sunday. Consisting of four boys and two girls, it is the only team to make the cut among Mumbai colleges, apart from two others from across the country. With over 99 teams participating from across the globe, the bars are raised high. Speaking to us over the phone from the space haven, team leader Tirth Shah explains what the challenge entails. “Students are expected to build and design their own rovers from scratch, which are then tested on a makeshift pathway similar to the celestial bodies in the solar system,” he shares.

Team Technovators has designed, fabricated and tested the rover, which weighs over 108 kg. They’ve spent over six months building the vehicle and are now waiting for it to be shipped. Chirag Kulkarni was the manufacturing in-charge and took care of every minor detail during the fabrication process. “It was a wonderful experience. I learned many practical aspects, scope and limitations of engineering. To make sure our rover is stable in extreme conditions, we had to do multiple calculations to get the correct centre of gravity. We studied how the other rovers are built and took the risk of making the light- weight rover,” he adds.

The wheels of the rover have been designed after rigorous testing and prototyping and the team has already applied for a patent of the design. Sarthak Agarwal used his expertise of software design for designing the wheels. “The periphery of the wheel is in the form of a bent ‘M’ shape, which increases traction three-folds, thus providing a better grip,” he explains.

Having made their way to the US on the weekend, the team’s immediate excitement was marred by a glitch at the airport. Speaking to us hours after landing, the team is without its luggage, thanks to the airport authorities misplacing them. “The actual competition begins on March 30, but for us it has already begun. We have been travelling for 22-hours and our bags are nowhere in sight. The airlines has promised that they will send it in two days, we can only keep our fingers crossed,” says the hopeful team leader.

Twenty-year-old Birva Ghodasara understands the pressure such global competitions bring, but she chooses to focus on her first trip to U.S instead. “There is always a little bit of pressure in any competition. But more importantly we want to take away an experience of a lifetime from this dream trip. This is an excellent opportunity to work alongside NASA astronauts,” she says excitedly.