Wild side: Sell the horn, save the rhino

South Africa practises the art of saving wildlife by allowing its hunting and, now, sale of valuable parts. 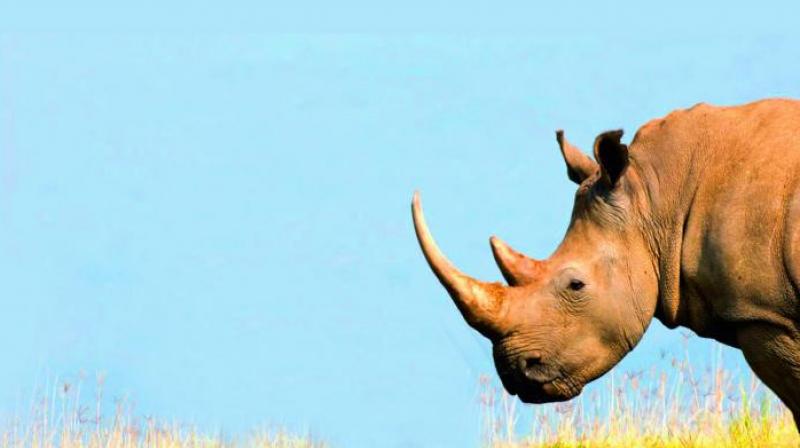 Africa’s use of rhino horn is similar to the use here of red sanders: both are used in traditional medicine and in an extremely limited way in handicrafts, and both find great favour in the Far East.

Recently, the Republic of South Africa lifted the ban on trading of rhino horn locally. What does that mean for the rhinos of Africa and what will be its fallout on Asian rhinos, especially those in India?

South Africa has some 20,000 rhinos, amounting to 80 per cent of the African rhino population. The reason for this is simple: the South Africans learnt early on that wildlife pays, and pays big.

In 1975, the population of wildlife in South Africa was dismal, standing at some 5.5 lakh big game animals. Large numbers had been decimated by hunting, land loss, habitat loss and land use change.

“That changed. People started farming animals on a large scale with the right to sell, trade, and hunt, basically to use wildlife as a renewable resource,” says Robert Brown, a professional hunter and safari resort owner.

Today, the number stands at 18 million. Animals on the verge of extinction have recovered. Most of the conservation efforts are driven by the US dollar, earned from hunting the famed African Big Five and other plains game animals.

There is a great stockpile of rhino horn in South Africa held by the government, the game breeders and to a lesser extent, the public. In among this floats the illegal horn, taken by hacking the horn off the animal with no regard to its age, condition, and whether it’s a female with calf or a pregnant one. The poachers are in many cases transnational, use helicopters to strike and leave the country anywhere between 24 and 48 hours of the operation. They are heavily armed and willing to kill the rangers protecting wildlife.

“The game breeders have their areas patrolled, which costs money. Today, 33 per cent of rhinos in South Africa are in private reserves which have lost about five per cent to poaching. About four years ago, private game keepers held 25 per cent of the rhinos and lost a quarter of them to poaching,” says Hendrik Maritz, game manager and professional hunter.

Conservation is not cheap. Tremendous amounts of money are required to keep up the anti-poaching initiatives. Less than a decade ago, rhino horn fetched $1,000 per kg as it was traded legally. After the ban on its export, it peaked at $60,000 at the end-user stage, the poacher getting at least 10 per cent of the final cost. With the ban in place the game breeders are unable to sustain the anti-poaching efforts.

The highest spending for protection of the rhino is $200,000 for a 16,000-acre farm, which includes armed guards, canine units and a patrol plane.

This money is got through hunting. Old bulls past the breeding age are sold for hunts after permits are obtained from the government, the premise being that the animals will die in a few short years, and this way a part of the money is recovered.

The licence to hunt the rhino is sold for anywhere between $60,000 and $70,000. There are also green hunts where unmarked animals are tranquillised, ear-notched and then returned unharmed. This costs a fraction of the hunt with all its thrills. What the game breeder had to do as routine has now become a lucrative product.

“With a value placed on the wildlife, and treated as a renewable resource, South Africa is more of a game farm than forest, for the purist. Animals are routinely culled to keep their numbers within limits,” said Franco Giulietti, professional hunter and game manager.

With armed-to-the-teeth patrolling in most of the game reserves in South Africa, poaching has come down substantially in the private reserves.

“South Africans believe that if they are allowed to flood the market with their stockpile of rhino horn, there would be a reduction in the poaching,” said Hennie Viljoen, founder, outfitter and professional hunter at Africa Hun-ting Safaris and Rupert Brown. They believe that shaving off the horn and exporting it will bring down the pressure on their stocks.

Will that shift the focus back to the Indian rhino? Indian rhino numbers have increased, so too the conflict and poa-ching. If the rec-ent aggressive stand taken by the forest department in South Africa to protect the rhino is anything to go by, then yes, it is time we started worrying about the safety of our rhinos.

The writer is a wildlife consultant, Hyderabad.