Be there when chai meets toast

The band describes their genre of music as four South Indian boys trying to put together English folk and Indian roots. 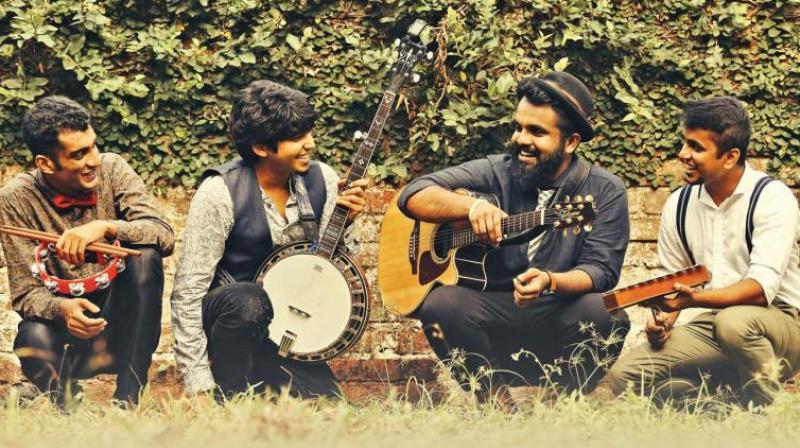 The band was formed when the members met for a jamming session at Fort Kochi.

‘When Chai Met Toast’ takes inspiration from the lighter side of life to create music that is heart-warming, happy and smile worthy. The newest band from the land of coconuts, they gained fans quickly with a special acoustic setup and a unique brand of infectious happy music, which transcends age, genre and even language. The band was formed when the members met for a jamming session at Fort Kochi. The music troupe is popular for their mélange of tunes that blends Western instrumentals with Indian vocals.

When asked about how the four came together and what led to forming a band, they would tell you that it came about from the love of music from four happy souls. Ashwin, who met Achyuth at Springr cafe in Fort Kochi, had been in the industry for about seven years playing different roles from that of a musician, artist manager, production head etc. A desire to write original music and similar musical interests with Achyuth led them to write their first songs together. They wanted to take forward the band as a bigger project, and Palee Francis and Sailesh Pai, whom they knew through mutual friends, joined in soon after, completing ‘When Chai Met Toast’.

We prodded them about their forthcoming projects. “‘Believe’, a current favourite of the band, is a single we plan to release in August. The song talks about taking the B from Believe and wearing it as your superhero mask (you being your own superhero). We recently composed four tracks for Kenny Sebastian’s Amazon prime series ‘Die Trying’. The forthcoming months lie in taking a lot of the ideas we have, and building them into full arrangements in the studio”, revealed the band.

The band describes their genre of music as four South Indian boys trying to put together English folk and Indian roots. “It’s mostly happy and positive, upbeat, and acoustic folky in sound,” the band explains.

We got in touch with all the four band members and talked about their tryst with music, early life, WMCT and more. One of the most disciplined drummers in the industry now, Sailesh started his music career with the Kochi metal outfit ‘Two Decades & After’. The groove master is also a drum teacher at the Yamaha Music School in Cochin. We wanted to know what drew him into playing drums.

“As a school kid, for music classes, we were always given the Cajon or a Congo to practice on. But I was always intrigued by the Pearl Masters which was kept in the adjacent room, which was out of bounds for us. Unfortunately at that point my family did not have the financial backing to support my interests. Right after my higher secondary I found a drum tutor and started practicing rigorously, and journey has been exciting to say the least”, he says.

We also asked Ashwin-vocalist of WCMT and playback singer about his playback career and if more regional numbers could be expected from him anytime soon. “My Playback career came out of the blue. It’s only after we released ‘Beautiful World’ that I got called in to sing for a well known director’s movie. From then on, my journey has been slow but steady. I have been choosing the kind of songs that I want to sing, and now have done 3 Malayalam songs, 1 Tamil and 2 Telugu songs”, says Ashwin.

Music has been a part of Palee since childhood. Occasional stints at the church choir led to his getting interested in drums and keyboard and eventually made him learn music programming on his own. Palee loves to play the guitar as he feels it’s a versatile instrument that helps him explore new sounds and experiment.

For Achyut, he found his breakthrough as a musician in Bali.  “Bali was where I first had exposure to playing live to an audience. I remember playing my first paid show at this cafe called ‘Coffee and Copper’, which my guardian in Bali Scotty Ze helped put together”, reveals Achyut.

When asked if there was any struggle, they say, “It has been a continuous but very enjoyable struggle, especially coming from a place like Kerala and singing in English mostly. The fact that all gour of us have been involved in the industry for the previous year’s definitely helped accelerate the growth of the band.”

“I think the Indian influences come naturally to us as that’s what we grew up listening to. The indie or western bent along with this Indian touch have clicked with a lot of listeners, giving us a different sound and niche,” explains the band when asked about how the mélange of western music with Indian influence work for the Indian audience.

Other than music, food and chai unites the band together.