No babies for endangered right whales this season

Researchers have recorded between one and 39 births each year since the flights began in 1989. 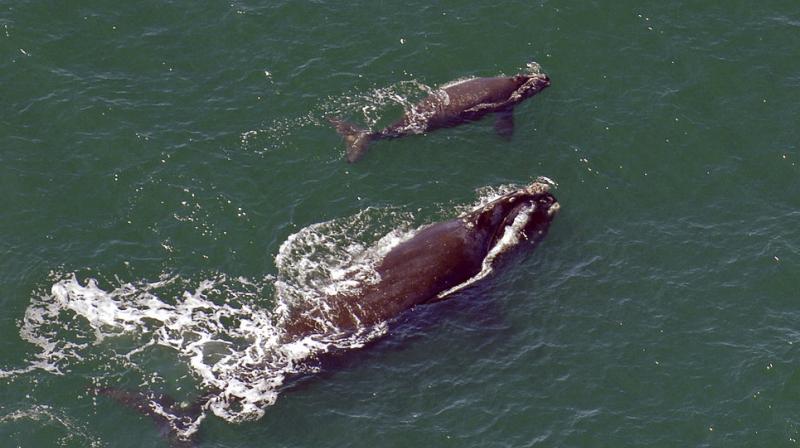 The winter calving season for critically endangered right whales is ending without a single newborn being spotted off the southeast US coast. (Photo: AP)

Savannah: The winter calving season for critically endangered right whales has nearly ended with zero newborns spotted in the past four months - a reproductive drought that scientists who study the fragile species haven't seen in three decades.

Survey flights to look for mother-and-calf pairs off the Atlantic coasts of Georgia and Florida are scheduled to wrap up when the month ends Saturday. Right whales typically give birth off the southeastern U.S. seacoast between December and late March. Researchers have recorded between one and 39 births each year since the flights began in 1989.

Now experts are looking at the possibility of a calving season without any confirmed births.

"It's a pivotal moment for right whales," said Barb Zoodsma, who oversees the right whale recovery program in the U.S. Southeast for the National Marine Fisheries Service. "If we don't get serious and figure this out, it very well could be the beginning of the end."

The timing could hardly be worse. Scientists estimate only about 450 North Atlantic right whales remain, and the species suffered terribly in 2017. A total of 17 right whales washed up dead in the U.S. and Canada last year, far outpacing five births.

With no rebound in births this past winter, the overall population could shrink further in 2018. One right whale was found dead off the coast of Virginia in January.

"It is truly alarming," said Philip Hamilton, a scientist at the New England Aquarium in Boston who has studied right whales for three decades. "Following a year of such high mortality, it's clear the population can't sustain that trajectory."

Right whales have averaged about 17 births per year during the past three decades. Since 2012, all but two seasons have yielded below-average calf counts.

Scientists will be looking for newborn stragglers as the whales return to their feeding grounds off the northeastern U.S. this spring. That happened last year, when two previously unseen babies were spotted in Cape Cod Bay.

Right whale researcher Charles "Stormy" Mayo of the Center for Coastal Studies in Provincetown, Massachusetts, said he was hopeful some calves were born this season off the Carolinas or Virginia, where scientists weren't really looking.

It's also possible right whales could rally with a baby boom next year. Females typically take three years or longer between pregnancies, so births can fluctuate from year to year. The previous rock-bottom year for births - just one calf spotted in 2000 - was followed by 31 newborns in 2001, the second-best calving season on record.

"I still think next year or the year after, we could see dozens of right whales calving down here," said Clay George, a wildlife biologist who oversees right whale surveys for the Georgia Department of Natural Resources.

With future births uncertain, researchers say more needs to be done to prevent human causes of many right whale deaths. Necropsies performed on the 17 dead whales last year found at least four were struck by ships and at least two died from entanglement in fishing gear.

Hamilton said speed restrictions on ships in waters where right whales are most frequently found might be expanded throughout the Eastern seaboard to further protect the giant mammals as they roam. Meanwhile, some commercial fishermen are testing gear with ropes that have built-in weak points designed to break rather than ensnare a large whale. Others are working on ropeless lobster pots that use inflatable bags to bring the traps to the surface.

Some conservationists are trying to force immediate change. The groups Defenders of Wildlife and the Center for Biological Diversity filed a lawsuit in January saying the federal government has failed to protect right whales as required by the Endangered Species Act and called for new regulations on the fishing industry.

Research has shown most females right whales are now dying by age 30, less than half their expected lifespan. And the adult females that had babies last year, identified by unique markings on their heads, were giving birth for the first time in seven or eight years - more than double the typical span between pregnancies.

"Right now, the sky is falling," Zoodsma said. "I do think we can turn this around. But it's sort of like, what's our willpower to do so? This is a time for all hands on deck.”