Ragasudha Vinjamuri, a Bharatnatyam dancer, performs to explain Aryurveda and conversations between the human body and music. 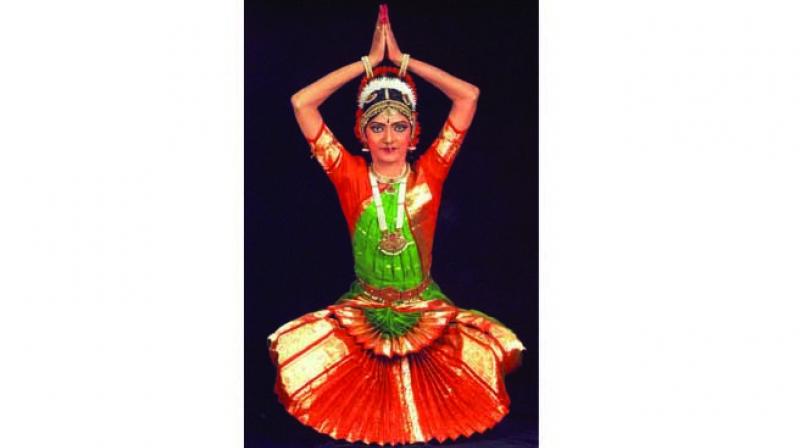 For more than a decade, she has been contributing to the Indian Art and Cultural scenario in UK. Having performed in both the House of Lords and the House of Commons, she says, “To be able to get the opportunity to perform seven times in three years is something really pleasing. I am fortunate and blessed to give performances on various themes like the significance of Ayurveda, significance of music and dance in therapy, etc.”

The double post graduate degree holder and a teacher by profession, she was born in a family of performers. Ragasudha started learning Bharatanatyam at eight under the tutelage of her guru Dr Uma Rama Rao.

With very little time granted to prepare, Ragasudha says she has her task cut out. “It is very difficult and challenging. I have to plan meticulously, so that I communicate everything within the stipulated time. Last year for the world’s first Ayurveda Day, I performed on how Ayurveda was born. Such topics are challenging and they need extensive rehearsal and planning.”

Her tryst with the British Parliament came when she was asked to perform for a music symposium a few years ago. She reveals, “The committee asked me to depict how human body reacts to music. I inspired my performance from the theories already proven in the Vedas. I used only instrumental music blended with mythological touch and depicted that music is an alternate medicine.”

She aims for a lot more by fusing awareness about social issues with her art. “I want to address contemporary social issues through classical dance thereby empowering people. I was inspired by Narendra Modi’s ‘Save Water’ campaign’ and recently came up with Jalanjali — a dance programme paying tribute to water conservation,” she says.

A few years back, Ragasudha also transcribed ancient palm leaf folios into modern Telugu. The 300-year-old manuscript, that was held in the British Library since 1942, contains spiritual composition of Acharya Ramanuja’s life and work.

“I worked for four years and eventually released the book, Ramanuja Vinnapam, in the British Parliament on Ramanuja Jayanthi. I am currently penning the English version for a wider reach,” reveals Ragasudha, who works as Faculty of Business and Management, University of Sunderland in London.