12 Hours in and around andheri west

Andheri can be a daunting suburb for those unfamiliar with its pace. If you find yourself stranded here, these are the best places to visit. 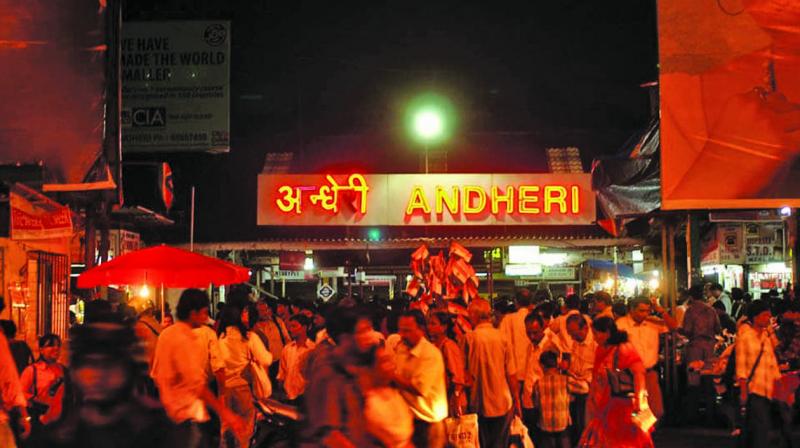 No, I’m not becoming shaana. If Andheri and you were to be connected on Facebook, your mutual friends would number in two, if not three digits.

If you ever spend half a day in Andheri West, you might need therapy. If you choose to spend half your day here, you most certainly will.

Versova is not Andheri West. Neither is Four Bungalows, nor is Seven. Juhu is beyond its borders. And Lokhandwala is practically its own principality. The Andheri West I knew was a laidback, mostly residential neighbourhood that an outsider zoomed through to reach snazzier locales. Then, years ago, it was paralysed by the Real Estate Virus; today, its middle-class residents are horrified by the glut of man and machine on its once sufficiently-wide roads, and Andheri West doesn't know what to do with itself.

For better or worse, this has been my home for 15 years, and I have found - amidst the incessant gridlocks, cookie-cutter apartment towers, and token footpaths colonised by two rows of hawkers - a few redeeming features that root me to my gaon. If ye possess fortitude, a sense of humour, and feet that itch to be run over by demented bikes, read on.

9:30 a.m.
Option A - Merwans Cake Shop
Throughout my parents’ childhood and mine, Merwans was the Willy Wonka of bakes and confectionery. On most mornings, its savouries counter resembles a raucous action house, where students and office-goers clamber over each other to grab a smorgasbord of puffs stuffed with the most delightful fillings, and rolls with buns so soft, you can almost see them go googly-woogly-woosh. Merwans offers a diverse, delicious (all hail the Kabuli chicken!), and ridiculously affordable breakfast.
If you happen to find yourself in its vicinity later in the day at around noon, dash in to claim the legendary mawa cakes; they disappear from shelves before you can say khoya (whattepun, whattefun!). The cashier says they’re sold out by 2 p.m. It’s a pity they’ve stopped making their signature rum balls, but you can always console yourself with a loaf of sliced plum cake embedded with fruit chunks marinated in something strong and spirited.
Merwans Cake Shop, 9/12/13, S. V. Road, Next to Indian Bank, Madhav Nagar, Andheri (w), Mumbai 400 058. Phone: 022 2624 8157. Closed on Thursdays.

Option B - Hotel Radha Krishna
Andheri’s last surviving Irani succumbed to McDonald’s, but Radha Krishna - or RK, as locals call it - is alive and cooking. What started as an Udupi joint now has something called risotto pomobhara on the menu (no, I haven’t a clue) but RK’s idlis, vadas, dosas,  and uttapams remain finger lickin’ good, unlike a KFC opposite that came, saw, gave up and shut down. Drop in on a Sunday morning to see families wolfing down their Sunday breakfast, a tradition passed down generations.
Hotel Radha Krishna, No. 50, S.V. Road, Opp. Shopper's Stop, Andheri (w), Mumbai 400 058. Phone: 022 2628 0197

11:30 a.m.
Option A - Amboli Village
Yes, a village, in Andheri West, complete with a Cold Storage and Village Beer Shop. Umbilically connected to St. Blaise Church and fanning out behind it, Amboli gaothan has been living and loving for centuries before the first skyscraper. Slip away from deafening Caesar Road (look out for the stateliness of Victoria Cottage) and into the quietude of sun-dappled lanes lined by quaint houses with names like Richard's Pride and Myrtle’s Dream. Keep one eye roving for a banana grove, endure the fierce glares of Christian dowagers in frocks and middies (and the most beautiful dresses for Sunday Mass). And if you cock a ear, you can eavesdrop on a corner store conversation conducted in pure Konkani.
St. Blaise Church, Amboli, Caesar Road, Andheri (w), Amboli, Mumbai 400 058. Phone: 022 2679 2756

Option B - Andheri Sports Complex
Earn your lunch! Shahaji Raje Bhosle Kreeda Sankul is a BMC-run sports facility responsible for making those of us who live in the vicinity look slim and trim (or so we like to think). You don’t need to be a member or even pay a deposit; from Tuesday to Saturday between 10 a.m. and 4 p.m., you can play badminton (Rs. 225), Squash (Rs. 150), Table Tennis (Rs. 90), Tennis (Rs. 240), and Pickleball (Rs. 300). Rates are per court/table per hour, excluding 18% GST. Bring your own sports gear.
Andheri Sports Complex, Veera Desai Road, Andheri (w), Mumbai 400 053.

1:00 p.m.
Option A - Joey's Pizza
There is a moment after you have single-mouthed-ly engulfed an entire keema do pyaaza pizza when your chin nuzzles your chest, eyelids melt into each other, and your sticky hand is too exhausted to rise up all the way up to your face and wipe the Joker-ish smear of Joey’s sauce that is accentuating your lips. This is the kind of place at which you can order by looking at the ceiling (there’s nothing there, the ambience is Spartan) and stabbing at the menu - whatever your finger lands on is the yummiest pizza in the suburbs. Joey’s makes it worth living in Andheri West. Almost.
Joey's Pizza, Shop No. 6 & 7, Upvan Building, D.N.Nagar, Madhuban Colony, Andheri (w), Mumbai 400 053. Phone: 022 2630 4808

Option B - Harish Lunch Home
Cartographically, this is just over the border in Vile Parle, but since I lived nearby and ordered in often, I’ve claimed it for Andheri. Carnivores from far and wide congregate here for its superlative seafood with a South Indian twist, shorn of branding and brouhaha. What the meat-freaks may miss out on is the most comforting, nourishing, flavourful Dal Khichdi they will ever have. Just the right consistency, with a squeeze of lemon, a little pickle, and a mouthful of bliss. Were I to relaunch the Chicken Soup series in India, I’d title it Dal Khichdi For The Soul; the book jacket would sport a picture of Harish’s finest offering.
Harish Lunch Home, 115, S. V. Road, Irla, Vile Parle (w), Mumbai 400 056. Phone: 022 2671 5758
3:00 p.m.
Option A - anywhere indoors
Let’s cut to the chase: it’s hot, you’re in a food coma and need to recuperate semi-horizontally, preferably with air-conditioning. So catch a late afternoon show at Fun Republic, where the cheapest seats are as luxurious as the Peacock Thrones in other multiplexes nearby. Or go watch a Bhojpuri film at Navrang with an all-male crowd. Pretend to shop at Susanne Khan’s Charcoal Project for furniture that costs almost as much as the Peacock Throne did. Or spend an hour-and-a-half trying on every last scrap of fabric in Fab India. I dunno, figure it out, men.
Fun Republic, Shah Industrial Estate, Veera Desai Road, Andheri (w), Mumbai 400 053.
Navrang Cinema, Near Metro Bridge, JP Road, Andheri (w), Mumbai 400 058. Phone: 022 2628 6603
The Charcoal Project, Unit No. 1, D-Mall, Off Veera Desai Road, Andheri (w), Mumbai 400 058. Phone: 022 6193 6198
Fab India, Unit No. 2, DE Mall, New Chandra CHS LTD., Off Shah Industrial Estate, Veera Desai Road, Andheri (w), Mumbai 400 058. Phone: 022 65517111

Option B - Go to a friend’s house and sleep
No, I’m not becoming shaana. If Andheri and you were to be connected on Facebook, your mutual friends would number in two, if not three digits. Everyone knows someone who lives here. Don’t be shy. Phone a friend, go over, and go to sleep.

4:30 p.m.
Option A - Ganeshji Iyengar Fast Food
Potted palms attempt to purdah this Bangalore Iyengar eatery/open-air café from a teeming road. Hope you encounter the genial manager instead of the grumpy one and order anything South Indian. They substitute white chutney for the tastier green one and throw in a tiny bowl-let of orange onion chutney. Feel free to ask for extra saambaar. Linger over your filter coffee, served in a tumbler and dabara.
If you find that you can’t drag your eyes away from a particularly handsome young specimen reading a novel as he savours his rava masala, come over and say hi.
Ganeshji Iyengar, Shop No. 3, Bharat Ark, Veera Desai Road, Azad Nagar, Andheri (w), Mumbai 400 058. Phone: 022 2673 0333

Option B — Ganesh Temple, Andheri Fire Brigade
It’s weird, perhaps even unfashionable, to recommend a place of worship, particularly if you, like me, are irreligious. But this unostentatious temple is an oasis — set back from the road, about the size of your kitchen, an idol less than a foot high, no priest, no loudspeakers, no queue, and often no people. Drop by to gawk at fire engines and uniformed firemen lounging and chatting with their families that live on the premises.
If you bump into a short, stout, friendly South Indian lady clad in white, don’t expect to be invited home for chaaya (tea). My grandmother is a very busy woman who has Malayalam
serials to watch.
Andheri Fire Station, Near Bharat Petrol Pump, Swami Vivekanand Marg, Irla Bridge, Andheri (w), Mumbai 400 058.

6 pm
Option A — Gilbert Hill
Climb the stairs up this 200ft-high monolithic rock to get a 360-degree view of Andheri (west). The altitude screens out traffic, noise and pollution, creating a tranquil, windy perch that offers a bird’s-eye view of the 'burbs. Watch planes take off over the dirty grey sea and watch the sun set over it. Point and guess the locations of every place on this list you've visited. In the evening, this is the place to be, and just be.
Gilbert Hill, Sagar City, Andheri (w), Mumbai 400 047.

Option B — Kala Pradarshini Udyan
Unlike most public gardens, this one does not boast of a lawn. Hence, absent are littering families and screaming children. Instead, you’ll find scores of tall, wild trees looming over well-manicured shrubs, intersected by walking paths used by very few. Rest on a wooden bench that hugs the curve of your back and watch a hip-hop crew practising in the gazebo. Bump into a theatre actor rehearsing his lines, asking a peepul why she left him. If you are a musician or dancer, feel free to claim the open-air stage built around an old tree. No one will mind; some may pause to watch.
KP Udyan, near Versova police station, Andheri (w), Mumbai 400 058.

8:00 p.m.
Option A — Brewbot
Locally brewed craft beer. Delectable food. Live music and stand-up comedy. Pub, grub, and entertainment hub, Brewbot is curated perfection under one roof. French-kiss a Black Mamba (Chocolate oat cream stout), experience the quirkiness of a Botwork Orange (Belgian Wit). Brewbot takes its beers seriously — it describes the “mouthfeel” of each brew and suggests dishes that would pair well with them. And wine not? For too long, beer in Bombay has been an Outcider in the world of sophisticated spirits; a Draft Punk. Its time has come. Hic.
Brewbot, G-01 & 101, Morya Landmark 1, Off New Link Road, Andheri (w), Mumbai 400 053. Phone: 022 3969 8091

Option B — Roadhouse Bluez
If you’re sufficiently sozzled, head over to Roadhouse Bluez and be prepared to be blasted backwards by an off-key voice screaming the lyrics of Another Brick In The Wall. This karaoke bar takes its music seriously; there are no lulls, no friends pushing each other to take the mic, no I-give-up-I-can’t-sings. Its modest size precludes any conversation but helps bind the audience — singers and listeners alike — into one chummy scrum of music lovers. Sing us a song, you’re the piano man, sing us a song tonight, well we’re all in the mood for a melody, and you’ve got us feeling alright…
Roadhouse Bluez, Ground/1st Floor, Tokyo House, Next to Andheri Sports Complex, Azad Nagar, Andheri (w), Mumbai 400 053. Phone: 022 2673 0975