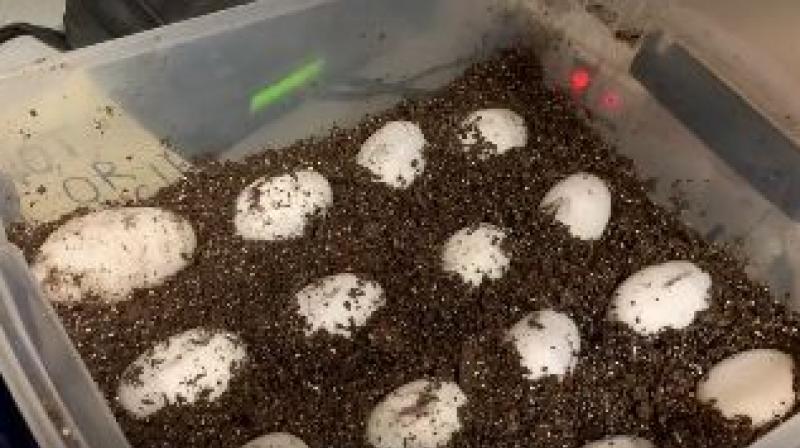 Alligator moms are said have the strongest maternal instincts among all the species in the animal kingdom. (Photo: Screengrab of Instagram video)

The alligator couple, 14-year old male Blizzard and 25-year-old female Snowflake are housed at the Gator Park located in Kenansville, Florida. Their caretakers discovered the egg in the pair’s nesting area. After discovering the eggs, the ‘croc squad’ at the park shifted the 19 eggs to a secure space. A video footage was found on Facebook, which captured the 19, super small eggs, reported The Geek.

It’s one of those kind of Thursday’s. #thisiswildflorida

Alligator moms are said have the strongest maternal instincts among all the species in the animal kingdom. Unfortunately, the albinism has made Snowflake blind. “To ensure these eggs have the highest chance of survival, we’re relocating the eggs to a more secure location to help protect them from natural predators and monitor their progress,” said Dan Munns, co-owner of the Wild Florida Airboats and Gator Park.

The park officials said that the incubation period for the alligator eggs in approximately two months. The eggs are now placed in an incubator and will be kept at stable temperatures throughout the summer. The officials are hoping for a successful hatch by the end of the summer. If the eggs are fertile, this batch will be the first albino alligators born and care for in Central Florida.

The albino alligator couple, Blizzard and Snowflake, have been living at the Florida Gator Park for the past two years.