According to reports same-sex duo at Odense Zoo are said to have made move after seeing 'neglected', seemingly abandoned chick. 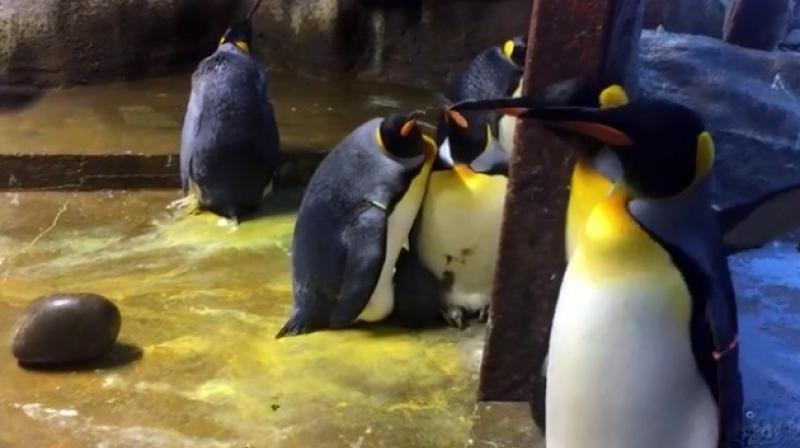 The parents disappeared and the kid was simply kidnapped. It was a pair of gay males who had snatched it and was stood with it.” (Facebook screengrab/ Odense Zoo)

In a bizarre episode, a gay penguin couple ‘kidnapped’ a baby while its parents waddled off to swim in a Denmark zoo.

The drama unfolded in a zoo in Denmark when the chick’s mum and dad were having their daily paddle.

According to animal keeper Sandie Hedegård Munck, who spoke to Danish broadcaster DR, the male penguin couple at Odense Zoo have been desperate to become parents.

She claims when they saw the chick being “neglected” by its parents, they decided to intervene and snatch it in hope of adopting it.

Speaking about it, Sandie said, "I could see that something was completely wrong. The parents disappeared and the kid was simply kidnapped. It was a pair of gay males who had snatched it and was stood with it.”

Sandy said she believed the mum had gone for her daily bath and when she did not return in time, the dad seemed to have forgotten all about his parental duties and left the chick alone.

She added: “When they saw him alone they probably thought ‘that’s too bad, we’ll snatch it'."

It was thought the mum and dad would return and claim their chick back, but that did not immediately happen.

Eventually they did come looking for it and it was decided to give them custody of the bird.

At first the penguins got agitated about giving up their adopted child without a fight, but Sandie said with a heavy heart they eventually let go.

But while this may pull at heartstrings, there is a happy ending to the story because the zookeepers, after seeing how they cared for the baby, have decided to give them an egg from a new mum who was unable to look after her offspring because of illness.