One could shower in the musical wealth of North and South India at this two-day extravaganza that recently concluded in the city. 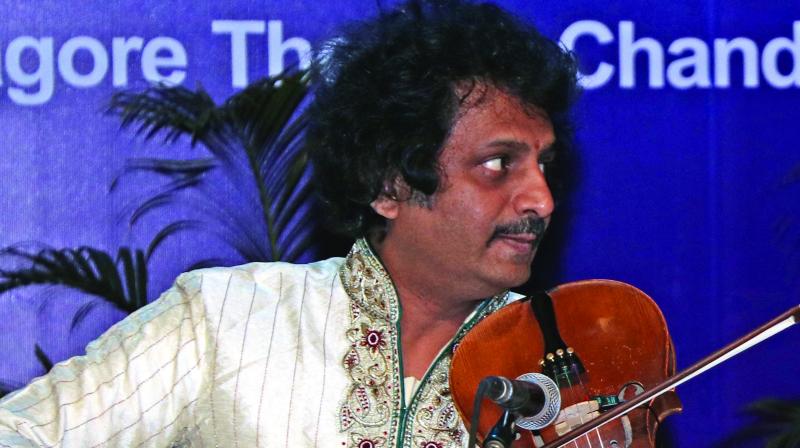 On the first day, the session by Pt Ajoy Chakravorty, chaired by Delhi gharana’s veteran vocalist Vidushi Krishna Bisht, was entitled ‘Aesthetic manifestations of Raga and Tala in Hindustani Vocal music’. This all-encompassing subject gave Pt Chakravorty the scope to cover a gamut of points, one of which was — a control of breath and mastery of identification of ‘sur’ are the two really critical elements of classical music singing. Enough attention was not given to practicing ‘swara’ identification, he said. Another point he made was that the ‘sahitya’ was not given enough importance in the North Indian vocal tradition. A raga cannot be the simple consecutive use of notes, he said, just like stringing letters of the alphabet does not make a word. He then presented a brief recital by his 16-year-old disciple, Anubhav Khumaru, who had been training under him since he was four or five, and whom Pt Ajoy Chakravorty claimed was the best singer in his age group that he knew.

The next session was on Carnatic music, chaired by Prof K.V. Manikandan, with panelists including violinist Dr Mysore Manjunath and vocalist/violinist Dr Shriram Parsuram. Dr Parsuram made the interesting observance that usually the compositions in Carnatic music were so all encompassing, covering all thre octaves, and portrayed aspects of the raga so well that improvisations in aalap were really not necessary. As music is an aural experience, he had to demonstrate by singing, and Dr Manjunath by playing his violin, to convey their points. On the subject of changing aesthetics, Dr Parsuram said greater emphasis on speed and display of virtuosity were so prominent today that masters of the past like Vidushi T. Brinda or Vidwan M.D. Ramanathan may not have been as respected and popular today. To the delight of the largely student listeners, the two artists gave an impromptu brief concert in Raga Kirwani, ‘brij ke nandlala’, which Dr Parsuram sang in the North Indian style.

The post-lunch sessions were devoted to concerts — the Carnatic vocal concert by the Malladi Brothers was a wonderful experience; they were accompanied on the mridangam and violin by teachers from the music department of Delhi University. All their four compositions (Ragams Shriranjani, Kalawati, Shankarabharanam and a Ragamalika) were beautifully sung.

The last concert was by Pt Tejendra Mazumdar on the sarod, accompanied on the tabla by Pt Ram Kumar Mishra. He is a musician who combines great ‘taalim’ with his own lyricism; this evening he appropriately chose the rare “jor” (constructed by the joining of 2 Ragas, the morning Lalit and early evening Raga Gauri) Raga Lalita Gauri. After a brief aalap and jor, he played his own composition. His next offering was Raga Pilu in which he played traditional compositions created by Ustad Allaudin Khan, and one popularised by Ustad Vilayat Khan. The beautiful stroke work, use of notes in two octaves, intricate phrasing, and delineation of the Raga, make traditional compositions incomparable; one wonders why more ‘gharaanedar’ instrumentalists don’t showcase the ‘gats’ of their ancestors instead of usually playing their own compositions.