Richard was fortunate to be born in the era when classical and modern dance animosity was ending. 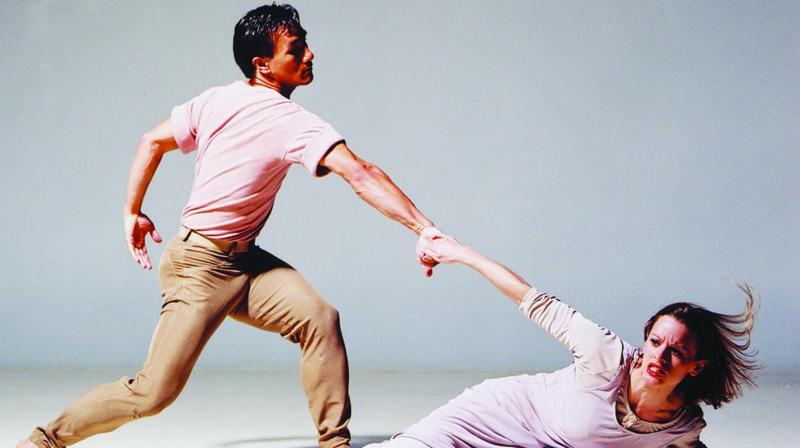 Richard Chen See in the midst of his immaculate performances

It’s wonderful when the needs of the hour meet well-timed solutions. The contemporary dance communities of Mumbai and Delhi are currently benefiting from the guidance and training of a master teacher with decades of performance, choreography and teaching experience with world renowned modern dance and ballet companies. Richard Chen See is a Jamaican of Chinese origin currently in India thanks to an American Fulbright-Nehru grant. This skilled and generous artistic nurturing comes at a stage when contemporary dancers in India are ready to enhance their conceptual and physical skills from artists of long experience.

Strong training in English ballet and years performing in the US as a soloist evolved into a decades-long modern dance career with The Paul Taylor Dance Company. I saw Richard Chen perform during the first Paul Taylor Company tour in 1997 and, although I had also danced Odissi for the company as part of a USIS dancer interaction and have fond memories of conversations with Paul Taylor, Richard and I did not meet personally.

A significant focus of Richard’s work with dancers in Mumbai and Delhi is working on the foundations of body alignment through basic ballet training. 10 years of training can’t be condensed into a few months, but significant progress can be made for advanced, middle level and beginning dancers under a master teacher.

Richard noticed, for instance, that dancers might unconsciously hike up their hip to get the leg higher at the expense of keeping the hips level and the raised leg turned out. He also realised that Indian contemporary dancers didn’t automatically understand that every exercise in a class was a necessary building block to the culminating moving sequences later in class. No ballet or contemporary dancer in the West begrudges the daily plies (bends) and other exercises as these are intrinsic building blocks for the movements to come. This is in contrast to the general Indian view that preliminary exercises are simply bits of dances and can be skipped once learnt.

Richard was fortunate to be born in the era when classical and modern dance animosity was ending. The time when a ballet or modern dancer wouldn’t be caught dead attending the other’s classes evolved to the desire and need to absorb as much as possible to enhance one’s own direction. Hopefully, the classical and contemporary dance worlds’ attitudes toward each other in India is also maturing to support respect and appreciation — where merited.

I feel Richard’s teaching residency with Danceworx Mumbai comes at a critically important time in a field where professional contemporary dance teachers with years of experience hardly exist in India. By this I mean that many of the teachers of contemporary dance themselves have limited experience in the profession. Talented, with a few years of performing, they become teachers to meet demand, but without the training pedagogy or basic kinesiology to provide safe and solid guidance; but there are no others, so basically freshers must teach as best they can.

I remember meeting Ashley Lobo many years ago when he returned from his outstanding classical and modern dance training in Australia. Hardly being in touch since then, it’s wonderful to discover his Danceworx ongoing dedication to “concert dance” beside the sustaining commercial contemporary dance, what Richard says in America is called “corporate show” dance.

The culminating Delhi event was a captivating presentation at Triveni Kala Sangam offered to their students of dance and arts. Triveni Kala Sangam, a historic Joseph Allen Stein architectural gem designed for arts presentation, is returning to life under Amar Shridharani’s stewardship after it faded from its pre-eminent position as a cultural hub after the founder, Sundari Shridharani, passed away.

Richard took us through known and unknown territories in modern dance history through his personal life journey. His identity as a dancer involved navigating through multiple stereotypes of his background, heritage and even dance training. To help us experience who he is, Richard began singing a Jamaican song, sharing the patois of his homeland and Bob Marley. Framed in postcards to those about whom he cared, we learn of his grandmother emigrating from Hako China and modelling for him that understanding takes more than words. The video clips shared glimpses of memorable performances, perhaps the most moving was his solo choreography, Shapeshifting, performed to the words of his writer friend with multiple sclerosis (MS) reading from his wheelchair.

From calisthenics to free ballet classes at the age of seven, Richard enjoyed the structure, compatible with his Jesuit schooling. In 1978, at the age of 16, a full scholarship brought him to the Royal Ballet School in London where he learned to curb his loud cultural volatility. Christopher Gable, a leading ballet dancer who transitioned to become a successful actor was an inspiration and mentor to Richard throughout his career.

His blossoming dance trajectory shifted to America after turning down a permanent position in England that required eye surgery to make the expressiveness of his oriental eyes “more visible”. After some freelance work in Miami and with legendary dancer/actor Geoffrey Holder, in 1982 he joined the Oakland Ballet in California. Here, notwithstanding being told his style was too English, he had many character roles by diverse choreographers, including Franz in Coppelia, the Nutcracker’s prince (shown in vintage video clips), other Ballet Russe and in a seminal work of German Expression, Kurt Jooss’s The Green Table.

I particularly enjoyed seeing the Battlefield and Aftermath scenes with his performance as I tend to remember only the iconic diplomats characterised in their dance macabre around the green table which opens and closes the ballet, ironic commentary on the futility of peace negotiations of the 1930s. As a side note, this was the first dance work to be fully notated using Labanotaton and is in the repertoire of ballet companies worldwide. The Oakland Ballet production of The Green Table was taught by Anna Markand, daughter of Kurt Jooss.

One of the beauties of dancing in the US was being able to do any role without stigma. From Irina Nijinsky’s staging of “Les Biches” (1924) to Cakewalk and his own Sleight of Feet to his final Oakland Ballet performance in Billy the Kid, Richard had imbibed the finest ballet choreographies across time and space. Now it was time it was time to move to a new level of personal and artistic growth.

Richard says that when he joined OCD, San Francisco he learned the importance of involved dance. ODC, formerly the Oberlin Dance Collective, became the first modern dance company in America to build its own facility. This was the era when the AIDS epidemic tragically struck with overwhelming impact on the artistic communities in the US and elsewhere. Modern dance expression shifted from abstract minimalism towards personal experience and current events, exemplified by Richard in recalling fellow dancer Frank Everett, who died at 28.

Modern dance, from its inception, has been about using movement to communicate the depth of an individual’s response to their personal explorations of the inner and outer world. For Richard, this encompassed the influence of J. Krishnamurti, becoming a kayaking and wilderness guide, teaching contact improvisation with the specially-abled and finding his artistic home with the Paul Taylor Dance Company.

Paul Taylor had danced with Martha Graham and Merce Cunningham as they evolved their modern dance techniques out of their training at orientalist Ruth St. Denis and Ted Shawn’s Denishawn School (later Jacob’s Pillow) as well as in George Balanchine’s ballets. But Taylor depended on his aesthetic eye rather than creating a technique and founded his own dance company in 1954. Dancers/Choreographers who emerged from his company include Twyla Tharp, David Parsons, Laura Dean, Dan Wagoner, Elizabeth Keen, Christopher Gillis and Senta Driver. His companies have “performed in more than 540 cities in 64 countries and still spends more than half of each performance season touring in American cities”.

At the age of 30, only 5’ 6”, Richard started at the bottom and remained for 15 years (1993 – 2008) to become a veteran, originating and assuming roles from the repertory spanning more than 50 years. He has been authorised by Paul Taylor to stage Mr Taylor’s dances on companies and educational institutions around the US and the world, including Taylor 2, the New Zealand School of Dance (as a Fulbright Specialist), Rambert Dance Company (UK) and American Ballet Theater.

Richard was with Paul scholar to India to keep Taylor’s legacy alive. I hope he can return to stage Taylor dances in India when dancers and sponsorship are ready.

Sharon Lowen is a respected exponent of Odissi, Manipuri and Mayurbhanj and Seraikella Chau whose four-decade career in India was preceded by 17 years of modern dance and ballet in the US and an MA in dance from the University of Michigan. She can be contacted at sharonlowen.workshop@gmail.com