Krithika Radhakrishnan in a candid conversation reveals her recipe for success. 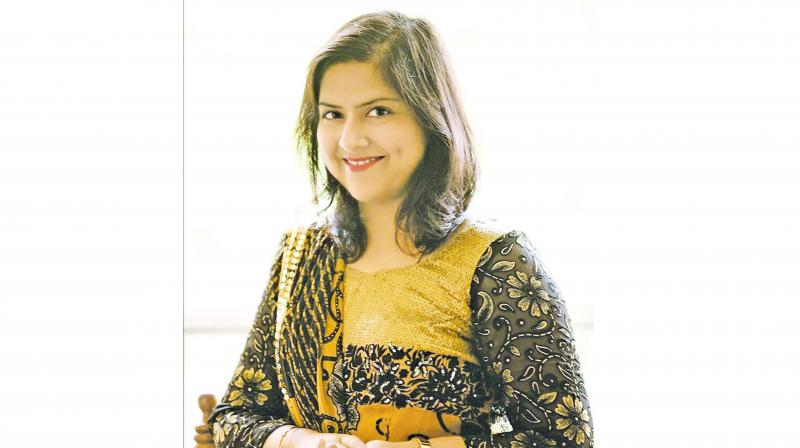 Journey to having own production house came from a handful of experience with various shows including an international one.

While you all draw bunch of recipes from the show Suvaiyum Arokiyamum, the woman behind  all those sumptuous palak corn khadi, thaval vadai, kiwi jam and millet vegetable rice attributes it all as a food show host to growing up in a “healthy” family. Born to senior neurologist Dr V Nagarajan, Krithika Radhakrishnan thought of giving it a shot with a twist, as she does not believe in random cookery shows. “Don't do shows just for entertainment value. Keep in mind nutrition. Go for doable nutritious dishes,” smiles Krithika spilling the beans on intelligent way to success. “If you pay attention to the last three stages of preparation of any dish, you can make it better than a 5-star hotel,” she tells DC.

Journey to having own production house came from a handful of experience with various shows including an international one. Krithika who has exported content for “the health and wellness show”  for the Malaysian channel Astro Vinmeen for four seasons with 5.1 audio dolby E surround sound, produced, directed and hosted cookery and nutrition shows for Doordarshan Podhigai is also an approved producer for the Central Institute of Indian Languages, Mysore. Having promoted healthy and tasty food over varied platforms including SunTV, Kalaignar TV, Jaya TV ,  Raj TV  etc over the last 15 years, the ardent foodie has earned the blessings of audience across the spectrum, besides being regularly involved in social working including advocacy programmes towards prevention of female infanticide in Salem district and serving as the president of Guild of Service in districts where husband IAS Dr J. Radhakrishnan has served as collector.

Sharing a memorable fan moment, Krithika goes on with gratitude,

"Once a visually impaired woman told me how she got inspired by my microwave cooking shows and made a few such dishes  That was a great moment for me. "And it was a moment of joy when actor Sonia Vikram called up Krithika about the coming little one. "She saw one of my sweet dish recipes on TV and wanted to try it. She asked me for my Youtube link so she could try it at home. And once she tasted it, she felt a kick from the baby," Krithika bursts into laughter.

About starting a travel show on Youtube,  Oorai sutri parkalam vaanga,  close on the heels of her food show,  Krithika  says, "I wanted to diversify and started a travel show- ranging from trivia to important belongings that one should have while travelling," The Ithu Namma Neram (on Youtube)  creator seems to be in love with regular vegetables, double roast rava, urad dal, olive oil, sunflower oil as these have evidently made a permanent space in her art. But the Madurai girl has blended her knowledge acquired during chemistry classes in MSC days. “That has helped me look at food from nutritional point of view and apply scientific principles.”The chemistry student who has an MBA in international business talks about home business and chemistry with Radhakrishnan  who is currently serving as the revenue secretary to the Government of Tamil Nadu. “With the busy lifestyle of an IAS officer, it is fine as I am able to use my time in a productive manner, “ says the food connoisseur who consciously chooses Oats kulipaniyaram as her favourite. The owner of ARKAY productions who has been part of more than 150 episodes of AVM's Mangaiyar Choice particularly shot to fame with her pioneering microwave cooking shows. The ‘Suvaiyo  Suvai’ host has also rendered her expertise by authoring books including Anubhava Samayal Kalai, Into the world of expert cooking and Microwave magic.