Junior Dravid is on his way!

Samit scored 201 in the first innings and an unbeaten 94 in the 2nd in an Under-14 inter-zonal level cricket tournament. 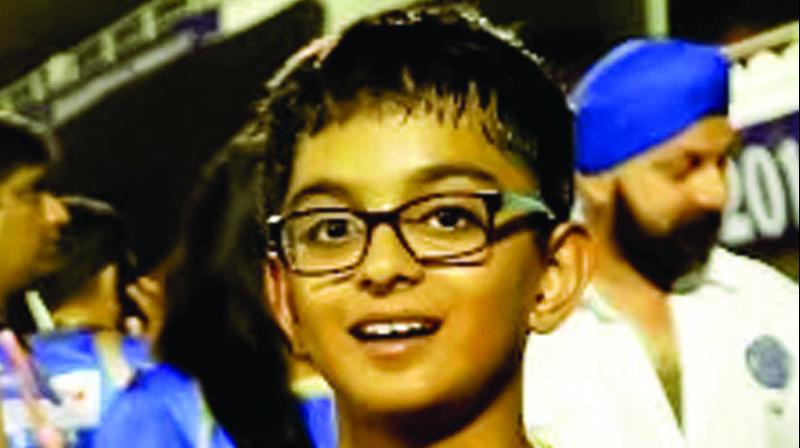 There are a few talented star kids who have followed in the footsteps of their fathers and have went on represent India at the world stage. Some famous father-son duos of Indian Cricket are : Sachin Tendulkar and Arjun Tendulkar, Iftikhar Ali Khan Pataudi and Mansur Ali Khan Pataudi, Lala Amarnath and Mohinder Amarn, Vijay Manjrekar and Sanjay Manjrekar (now also a commentator), Sunil Gavaskar and Rohan Gavaskar,  Yograj Singh and Yuvraj Singh, Roger Binny and Stuart Binny.

Perhaps, we should now keep an eye on Samit Dravid, son of one of the greatest of the Modern Era, Rahul Dravid.

Following in his legendary father Rahul Dravid’s footsteps, Samit showed early signs of his batting talent by scoring 201 in the first innings and an unbeaten 94 in the 2nd in an Under-14 inter-zonal level cricket tournament.

Well, well, you need numerous planets to beat your father at his game, especially when dad is a legend.

“Samit will play for India. Not only that, he will score big and break records. He will tear his way into the history books. His records will stand for a long time,” predicts renowned sports astrologer Greenstone Lobo.

“Does Samit’s birthday give something away ? He was born on October 11, 2005, exactly 63 years after Mr. Amitabh Bachchan. This simply cannot be a coincidence”, says Lobo.

“Samit seems to have everything going for him. He is a Virgo-Libra-Sagittarius, which makes him a person inclined toward sports, naturally. Virgos are perfectionists, Libras have the artistry and style and Sagittarians are passionate. So, he is a born sportsman. And he was born in the right home. His father is a legendary cricketer, revered for his professionalism, selflessness, the hard battles he fought on the field and the impeccable way in which he always conducted on or off it. Besides that, his father is also the coach of the junior Indian cricket team. Samit is going to learn the ropes from the best man in the country.”

“When Samit posts those big scores, makes a place for himself in the regional teams and then breaks into the national team, I hope people understand that it is through merit
alone and not because of his father’s clout.”

“Samit has it all. His being born in Rahul Dravid’s home at the right time was Destiny’s sweet way of ensuring the continuity of his illustrious father’s legacy,” Lobo concludes.