Marvia Malik has made history in Pakistan by becoming the first transgender newscaster in a conservative Muslim country. 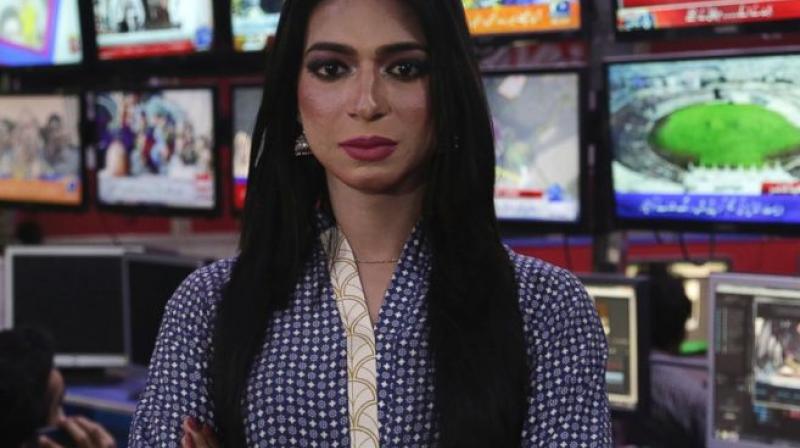 She was bullied by classmates, and her parents forced her to leave home after graduating high school. (Photo: AP)

Marvia Malik has made history in Pakistan by becoming the first transgender newscaster in a conservative Muslim country where members of her community are taunted in public, ostracized by family and targeted in violent attacks.

Pakistan officially recognized transgender as a third gender in 2012, but transgender people are largely confined to the margins of society, with most forced to survive by begging, dancing and prostitution. Sex reassignment surgery requires a court order, family approval, a psychiatrist's note and a medical recommendation.

At just 21 years old, Malik is already breaking down some barriers. Earlier this month, she became the first transgender woman to strut along the catwalk at a fashion show. But she says her true passion is journalism, and she's thrilled to be the face of the evening news on the private Kohenoor network in her native Lahore.

"Our society treats transgender people shamefully, degrading them, denying them jobs, laughing at them and taunting them," Malik said. "I want to change that."

Like many transgender people in Pakistan, Malik had a difficult childhood. She was bullied by classmates, and her parents forced her to leave home after graduating high school. She took refuge with other transgender women and worked as a beautician to put herself through journalism school.

It's a different story at the television network, where she says she has been welcomed with open arms.

"I cannot express the love and respect I have received here since I began work," she said. "I have not felt any discrimination."

Some of her colleagues were initially resistant to the idea, said Junaid Ansari, the station manager who hired her, "but I decided to give her a chance."

He said Malik is "doing fine" reading headlines, and promised she would face no discrimination. He said her performance had even inspired him to hire a second transgender woman, to work as a copy writer.

There are other signs of change elsewhere in the country. A boy scout troop in the southern port city of Karachi enrolled 40 transgender youths last month. After the Supreme Court ordered the government to list transgender as a third gender on ID cards, the national agency responsible for issuing them said it would employ transgender people at its offices across the country.

The decision to recognize a third gender was seen as a step in the right direction by transgender women, who previously were forced to identify themselves as men, leading to more severe forms of discrimination. Many hope they will eventually be recognized as women.

Transgender people face greater peril in more conservative areas of Pakistan, where Islamic extremists associate them with homosexuality and prostitution. In the northwestern Khyber Pakhtunkhwa province, 55 transgender people have been killed in recent years and hundreds more assaulted, according to Farzana Jan, the president of Trans Action Alliance, a local rights group.

The most recent killing took place Tuesday night, when gunmen opened fire on a rickshaw carrying a transgender woman who went by the name Pinky and her male companion. Both later died of their gunshot wounds. No arrests have been made, and police say they are investigating.

Malik said she was "shocked" to hear about the latest killing, and plans to organize protests demanding that those behind such attacks be held accountable.

"I have made history in my country, and I vow to use my profession as anchor to change the general attitude of our society toward transgender people," she said.

Farzana Jan, the head of the Trans Action Alliance, hopes Malik can serve as a role model for others and change the popular perception of transgender people.

"Thank God, one of us is going on television in a serious job," Jan said. "Previously, we have been presented as a joke. I hope and I believe this will help us get our rights, our protection and respect."