The Chilling Adventures of Sabrina is twisty and fun. 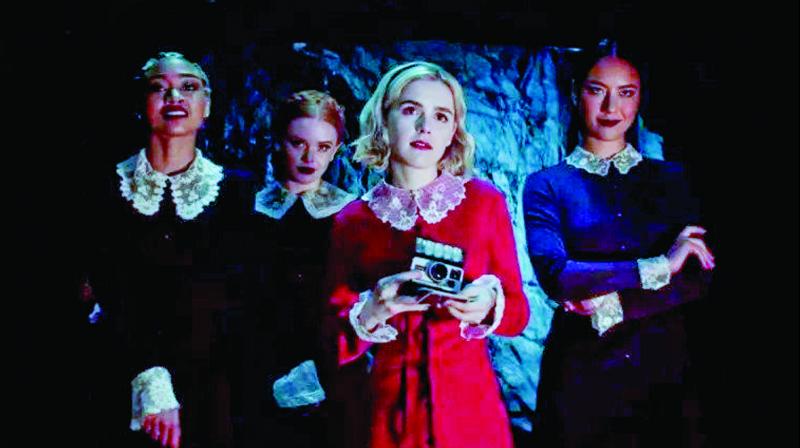 A still from season one of Chilling Adventures of Sabrina

A witchs’ coven is close knit once you’re in you can’t get out and you’re bound to serve the Dark Lord. Challenging misogynistic laws, breaking traditions, squashing egoistic warlocks and going weak in the knee for one, half-breed witch Sabrina Spellman did it all with vigour, passion and style.

All the 90s kids sure remember the famous sitcom Sabrina the teenage witch while this was a sugar coated version. The recent supernatural horror series The Chilling Adventures of Sabrina has the same characters but with a twist of evil. Season one starts with her aunts pushing Sabrina to sign the Book of the Breasts. But, this of course came with a price, by giving her soul to Satan she will have to leave her mortal life behind and move to the academy of unseen arts. Revealing the fact that she’s a witch to her boyfriend Harvey she casts the spell “Listen to my voice. Hear my words, and forget I said anything. Bless your mind and your heart, let these painful thoughts depart.”

With manipulation by the spirit of Lilith (queen of hell) the key to making Sabrina surrender herself to the dark lord, she prepared for her dark baptism in a laced black dress. As she signed the book of beasts forcefully she felt the power of the Dark Lord enter her. While the series gave us a fascinating insight into witchery, our fond childhood memories of the innocent Sabrina are vanquished.

After growing apart from her mortal friends Sabrina faces challenges in the witch school from the weird sisters which is self-explanatory. From bullying to peer pressure Sabrina fights them all with courage and also helps the weird sisters from being killed.

“The weird sisters hand in hand, travelers of the sea and land. Thrice to thine and thrice to mine and thrice again to make up nine. Peace! The charm’s wound up.” And thus, begun the union of a half-breed witch and the notorious sisters. The recently released second season was a bit of a roller coaster ride. The series intensified by enhancing Sabrina’s power, and surprise! The famous bachelorette aunt Zelda marries the High priest and of course Sabrina’s warlock boyfriend. The other strong character to love is Sabrina’s cousin Ambrose Spellman who plays a vital role in guarding Sabrina. From protecting her father’s manifesto to finding out that the Dark Lord himself is her father, this series clears our foggy vision.

With a dramatic ending of the second season and a small hint into the sequel, fans are going gaga as the release date for the third series could be around late October.