Pretty things, or maybe not?

Meghna Agarwal, a young artist, has decided to showcase her artwork which dwells on the effect of deforestation. 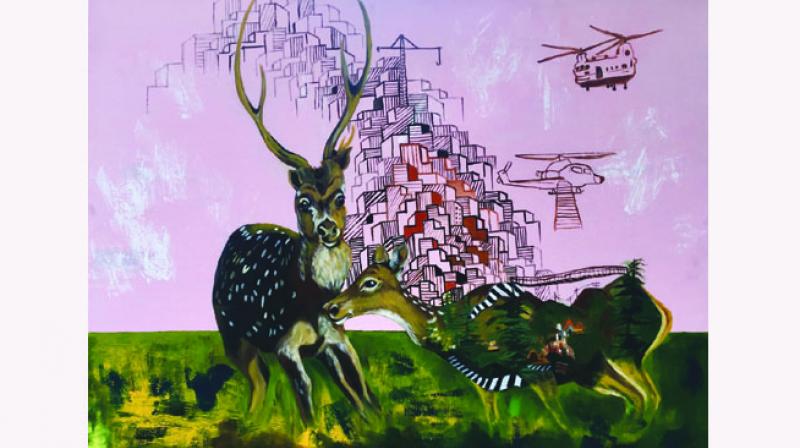 Artworks by Meghna Agarwal, titled– Animal too Deserve this Planet

Art has always been a reliable means of archiving change. Consciously or inadvertently, artists document socio-cultural changes, not only through the work itself but also by absorbing into the artistic vocabularies the new visual materials that accompany any major shift from one way of life to another. Even if an artist's canvas is full of fantasies, fragments from contemporary life are likely to get reflected in their canvases.

Meghna Agarwal, a young artist has decided to showcase her artwork, which dwell on the effects of deforestation and urbanization have on the flora and fauna. In seeking to bring awareness about the shrinking habitats of the rare species, she has beautifully voiced her concern. One of the most dangerous and unsettling effects of deforestation is the loss of animal and plant species due to the loss of habitat; not only we lose those known to us but also those unknown and unseen, potentially an even greater loss.

Some of the adverse effects are climate change, desertification, soil erosion, fewer crops, and flooding, increased greenhouse gases in the atmosphere making our plights wretched.  Her work is provoking people to think along these lines and come forward with a solution for the amelioration of the plights of endangered species dwelling in the mosaic of ecosystem.

The exhibition having different artworks on different animals against the backdrop of urbanization is thought provoking. The artist has chosen bright colours which immediately draw attention of the views at the same time compel them to take actions against deforestation. The animals have been definitely painted. There are bold brush stokes which make the artworks striking.

Through her artworks she has also highlighted on how people are messing up with oceans and other water bodies by disposing off the waste and plastics which prove fatal to the aquatic flora and fauna specially the  sharks whose fins are being chopped off for commercial purposes.

Finless sharks are not able to swim and eventually meet with their tragic deaths. Nature retaliates furiously if her resources are being misused.

In the words of British playwright, George Bernard Shaw, 'nature may have tricks up her sleeve if the chemists exploit her greedily.