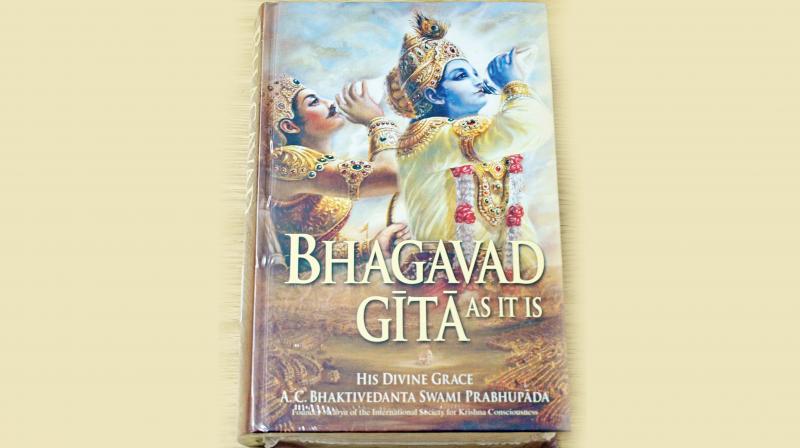 A private member’s bill may soon come up for discussion in the next session of Parliament, which talks about making the Bhagavad Gita compulsory reading in schools. The bill also recommends derecognising of institutes that do not comply with it. The bill was moved by BJP MP Ramesh Bidhuri, who calls it Compulsory Teaching Of Bhagavad Gita As a Moral Education Text Book In Educational Institutions Bill, 2016. “It is highly deplorable that such literature containing infinite teachings for all age groups is neglected by our educational institutions,” he had said, in favour of the teaching of the Gita. We speak to educationists and social workers on whether this is a good move.

‘It could be introduced as an optional subject’
Saurabh Pandey, actor
I don’t think it should be forced upon anyone. It could be introduced as an optional subject and those who wish to study it can take it. There might be people from other religions who may not wish to study it and by making it compulsory for them, it would in a way disrespect the holy book. Moreover, whatever little that I have read be it Bible, Quran, Gita or Guru Granth Sahib, I have realised that they all talk about the same thing i.e. spreading love.

‘Diverts attention from other issues’
Prince Gajendra Babu, educationalist and general secretary of State Platform for Common School System
Education is secular. You can’t teach Bhagavad Gita as a subject because imagine if a student asks the question if he too can wage war with his uncle over a problem. These are faiths and it is better when they are kept at home. Nobody can question someone’s faith and it cannot be taught as education. Kamba Ramayana and the likes of it should be taught as literature and not as morals. This is an attempt of BJP to divert the attention from real and pressing issues in out current state of education.

‘May result in clashes among people’
Ampat Varghese, educationalist
I hold that compulsory injection of religious texts like Bible, Quran or Gita into the educational spheres is in itself an immoral act. The accompanying threat in this case that institutions do not include it must be shut down is an indicator of a deeply immoral intent of the proposal. The worshippers and propagators of religious texts can do it at home or in their particular religious places, they can sell these ideas in their particular theological institutions to their followers but should keep these out of educational institutions. An equitable society that rejects ideas of racism, and is focused on the human dignity and rights including the right to pluralistic, multicultural, scientific approach to the human problems is the need of the hour and not violent calls to impose religious laws. Students must focus on getting authentic contemporary knowledge that can solve contemporary issues in the society. In the long run, one can be sure that students who love learning and are threatened and forced to study religious texts will abandon that and discover the new. One should always remember that moral values do not stem from religious texts. Such laws might also result in clashes among people who are worshippers of different religious texts.

‘The govt shouldn’t get involved’
M.A. Baby, Former Education and Culture minister of Kerala
It is not the job of Parliament or any individual to decide what should be taught in schools and colleges. The curriculum committee is responsible for setting up a syllabus for students and it is done post a lot of research and planning. Apart from this, NCERT is the central body that works on making the syllabus and curriculum for students. The authorities associated with these bodies very well know their jobs and any intervention of a particular party to inject their communal anarchy into the children of a country should not be entertained. Bhagavad Gita might be a great book of morals and there are many other religious books as well. But that doesn’t mean that every party when it comes to power will propagate its religious agenda. It is clearly an anti-democratic subversion of our educational system.