Clearly, Niranjan Mukundan has not let his physical anomalies come in the way of his glory. 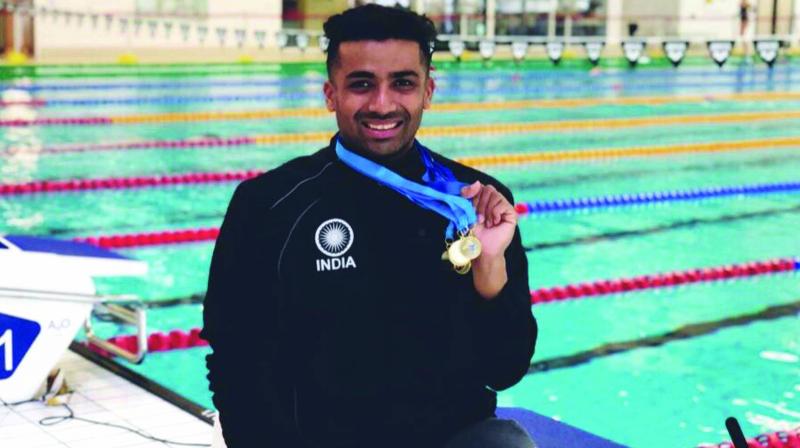 No surprise he was listed in the Forbes 30 Under 30 — Asia —Entertainment and Sports 2019.

Nick named “medal machine” and “golden fish” for his achievements in swimming and especially his favourite, the butterfly stroke, Niranjan has already undergone 17 surgeries since birth. But if anyone thought that would hold him back in life, well, he’s just proved them wrong. Clearly, Niranjan Mukundan has not let his physical anomalies come in the way of his glory.

The 25-year-old was the bronze medal winner in men’s 50-m butterfly stroke at the Berlin World Series , and is the current Asian Record Holder in the 200-m backstroke event at the Asian Games  and numerous gold medals, particularly at the 2017 IWAS Junior World Games in Prague and the World Junior Games in 2015. In fact, the Asian Games bronze medal he won was after beating a 15-year-old record. Niranjan won 5 gold medals in the recent championship in Norway . No surprise he was listed in the Forbes 30 Under 30 — Asia —Entertainment and Sports 2019.

Support systems at work: Ask him about his ascend to glory, and the graduate from Jain (Deemed-to-be) University with a Masters in sports management from the ISST University, with a consistent 70-75 percentage in academics, is clear about his support system.

“Honestly, I think it was an effort on everyone’s part, including my family, relatives, friends and my coach John Christopher. My university also offered a lot of help with my attendance, extra classes and other benefits. That itself helped me focus on my practice. Of course, I had to sharpen my time-management skills so that studies and swimming could go hand-in-hand. Soon, I began focusing on the competitions and I am happy that I could succeed in them. From the days when my family couldn’t afford to send me on my tours or set me up with the nutrition I needed to the day I received all these medals, my journey would’ve been incomplete without their help, and a few NGOs.” says the athlete.

Positive strokes: Niranjan, who had started swimming at the age of 7 years, was born with Spina Bifida, a defect that affects the spine, leaving him paralysed below his waist. Did the reality of his disability ever consume him? “It was only on land that I couldn’t stand. But I was able to move easily in water, so that made me very happy as a kid, and I loved every day in the pool,” says Niranjan.

And the zeal and passion for the sport was hard to miss, especially for his then to-be coach, John Christopher. “Coach John identified my passion for swimming. He let me and my parents know that he saw a lot of potential in me and promised them then, 16 years ago, that he would make me an international athlete and one of the most decorated para-swimmer of the country. He has been a fabulous coach and a mentor for me,” asserts Niranjan warmly.

Just as we sit back admiring his spirit Niranajan adds another positive spin to it. “Come to think of it, my disability has led me to make a name in the world today. And it’s surely made me a better person,” adds Niranjan who also was a guest at TED talk  where he shared his journey with the world and received a standing ovation.