This five episode supernatural series is eerie and scary but nevertheless fun to watch, if you have a penchant for horror shows. 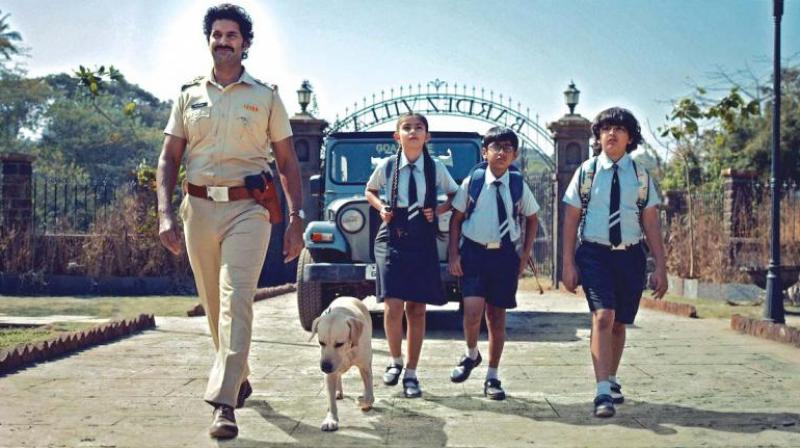 A scene from the Typewriter

A  typewriter is an obsolete instrument. Much like  the  typical  miniseries on  television which  has  now been taken over by  the  smart sexy  web series  with production values that could put an average  Subhash Ghai film to shame.

And yet the  sheer  vintage  value  of  the ‘typewriter’ is preserved  in writer-director Sujoy Ghosh’s  engaging genre-conforming   yet  unorthodox  supernatural webseries . What is  it about?  You may well ask. It’s about a discarded  typewriter  which does sinister things on its own, like  pounding   out corny  messages like ‘Bhoot  is not  Jhoot.’

Jhoot or not, Sujoy’s re-Bhoot series stretching slinkily into five episodes has a  lot of fun with spirits. The writing is  sprightly yet dark,  grim yet  giggly, smart and briskly paced.  This is  not to suggest that Ghosh is here trying to do a Stree….you know, make  ghost  funny. To its credit though Typewriter  succeeds in being humourous while scaring the hell out of us.

A  family  moves into an abandoned yet  strikingly  picturesque  bungalow  in  Goa. We soon realise that  the  mom Jenny (Palomi Ghosh) has a deep and devastating connect  with the home.  Here  is  where the series gathers  its strength and hits  a solid punch in our  solar plexus.

Jenny’s  husband played by Samir  Kochhar  is  involved  with  a tartish temptress who has one of  the  series’   funniest scenes with  Kochhar  in a  car. There  is  also a lengthy flashback about  a matriarch’s witchcraft powers shot in an enticing orange glow that  suggests a state  of  exploitative saturation.This flashback sneaks in a little  homage to Amitabh Bachchan’s ‘Mera baap chor hai’  tattoo  from Deewaar, and this as  close to the Bachchan as  a webseries can get at the moment.

All this tends to  scatter the  plot, make it zig  and zag through  situations that would otherwise  have been avoided in a tightly-edited feature  film.Also , much as I  loved  the little girl Sam (played by Aarna Sharma) and her  sleuthing  activities with her  young friends,  it just didn’t seem to hit the right  notes, veering from the over-cute to the outright  listless.

What works is  the ever-dependable Purab Kohli as a caring single parent and  an inquisitive  cop  trying to piece  together a scenario  of  baffling sinisterness.

Some  of  scenes  inside the  haunted bungalow are exquisitely shot, capturing as they do the rhythms  of everyday  activities  pressurised by a spell inexplicable happenings. Typewriter should have  concentrated  more on the  ghostly dynamics  of  the Haunted  Haveli rather than  run around collecting proof of its own adventurous  spirit regarding the  ghostly genre.

That having said, there  is an ingrained warmth  in   the storytelling. And though the child actors do not have a well-appointed space  in the  voluminous  plot they succeed  in  imbuing a great deal  of  honesty to the  telling of a  spooky story that has the potential to be a pedestrian shiver giver, but manages to become something more.