Yes or no to firecrackers?

Considering safety, and the pollution caused by firecrackers, does the restriction in their use seem like a good move? 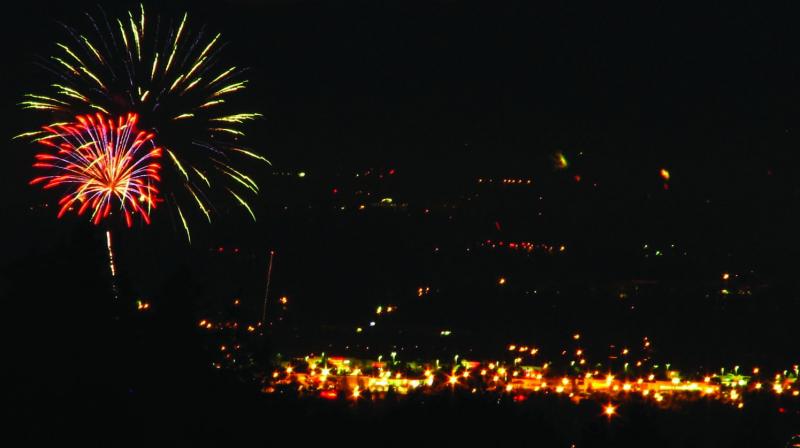 The court temporarily banned the sale of firecrackers in last October. Earlier this week, however, the Supreme Court ordered a restricted use of firecrackers from 8 pm to 10 pm, considering the deadly pollution of Delhi and other cities.

There are many who excitedly wait for Diwali, the festival of lights, just to have fun with firecrackers. However, there have always been concerns regarding safety and the extent of air pollution they cause. In 2015, a petition was filed in the Supreme Court on behalf of three infants – a first in the judicial history of India — seeking a complete ban on firecrackers. The court temporarily banned the sale of firecrackers in last October. Earlier this week, however, the Supreme Court ordered a restricted use of firecrackers from 8 pm to 10 pm, considering the deadly pollution of Delhi and other cities. The court has allowed the use of ‘safe and green’ crackers during that period. However, no ‘low-emission’ firecrackers exist in the market yet, so this may actually lead to a ban. The firecrackers will be allowed only in certain spots of Delhi as it is the world’s most polluted city according to WHO reports. Online cracker sale has also been curbed.

Considering safety, and air and sound pollution caused by firecrackers, does the restriction in their use seem like a good move? Diwali being a widely celebrated festival of the country, will the restriction be well received by the hardcore revellers? Since pollution is attributed by many factors, will restricting the use of firecrackers alone help in reducing it?

Lightning devils
Amita Rawat, music manager
Diwali is almost here! As a kid, as much as I loved crackers, I hated the noise that came with it. I just wanted to get under the blankets and hide. It was heart-breaking to hear our neighbour’s dog howl and bark all night long. It was also heart-breaking to see little kids and babies react to Lakshmi bombs and 10000 ladis. Since I’ve understood the destruction that happens because of fireworks, I never use these lightning devils. My box of tricks in this festival, I play with soothing sounds of my favourite songs and organise in-house musical parties, make children enjoy indoor games and such things that make everyone celebrate their inner fireworks. Like me, everyone should save themselves from fireworks and celebrate with each other an original piece of joy.

In support of green crackers
Divya Doraiswamy, Shlokapreneur
I think it is only fair if people begin to walk the talk, when it comes to showing that they care for the environment. Personally, I’ve always been up for green crackers. I believe in being environmental and animal friendly. The timing stated by the Supreme Court seems perfectly fine. The fireworks business doesn’t suffer, it is the livelihood of thousands of people. Pollution is attributed by many factors, so restricting the use of firecrackers alone will not help in reducing it. But there’s always a start, and let it be this Diwali. I’d like to sum this up as a ‘convenient’ rule and people should respect and adhere to it.

Pollution rates will decrease
Sreelatha Nair, blogger
I believe it’s high time we used a better acumen towards this issue. Rather than allowing two-hour restricted use of firecrackers, this matter calls for a complete ban of noisy and pollutant firecrackers. Doing so may not bring in a revolutionary decrease in the rate of pollution; however, it can be a toddler step towards it. The air and sound pollution during the festival period is turning out to be a villain, especially for senior citizens and infants. In a country like ours where we have numerous celebrations, we should try to accommodate everyone’s interests and be considerate towards the weaker crowd. I think we should be looking at less polluted nations and adapt from their environmental policies. Before getting into a rebellious mode towards such policies, give a thought to the abundant positivity that it  may lead to. I would strongly vote for policies that place safety first. Diwali is a festival of lights; let’s spread the light of care by adapting better ways of celebrations. No festivals are intended to do harm to anyone, let’s redefine our perspective for a better and healthier environment.

Welcome move
Preet Karnawal, model and actress
If there is one festival that I dread, it is Diwali. It makes me panic because of the high decibel firecrackers that not only hit the ear like loud drum beats, but also cause pollution by releasing chemicals and metals into the environment. I welcome the decision of the Supreme Court to ban sales of crackers in Delhi and the National Capital Region (NCR) till after Diwali. This is the region that is affected most by air pollution. In 2016 after Diwali, Delhi’s air pollution levels stood at 29 times the permissible level specified by the WHO. Bursting of crackers is in no way an integral part of Diwali which is celebrated in different ways across the country. I would say, because of so many factors, the Earth is already polluted. Diwali is the time when it goes to the level when we are not able to even breathe and there are higher risks of other things like smog, fire accident, garbage, harmful gases in the air etc. Other living beings, especially pets, are also affected. Rather than creating problems for our future, we can celebrate this lovely festival by lightning the house and spreading love.

Not very viable to implement
Tejashree M, student
The ruling was abrupt and didn’t give manufacturers enough time to come up with alternatives. The government could give incentives and help the firecracker industry to invest in R&D to develop more environment friendly crackers. Also, under the Swachh Bharat initiative, the government could encourage citizens to limit its usage until we can move to nature friendly alternatives.

Ban may sadden youngsters
Sunny Chandani, corporate employee
Every change has two sides. The air pollution is not only caused by the firecrackers, but this is one of the major reasons, especially in Delhi. However, considering the fact that Diwali is the biggest festival in India and has been celebrated with crackers over the years, the ban would sadden most of the youngsters. I also believe that the ban can help people meet and socialise more than spending time burning the crackers. People will get more involved in get-togethers and in-house activities could be encouraged in the family. It is okay to have it restricted with time limit just like Garba festival. This can solve the issue of environmental harm and people can celebrate the festival as well. We should also think that there is a huge amount of labour involved in the making of these firecrackers; it is a great means of employment for them. That, too, should be considered.