Starting a talk on menstrual health

Ruhpreet has resolved to create a change in her town by breaking the taboo around mensturation. 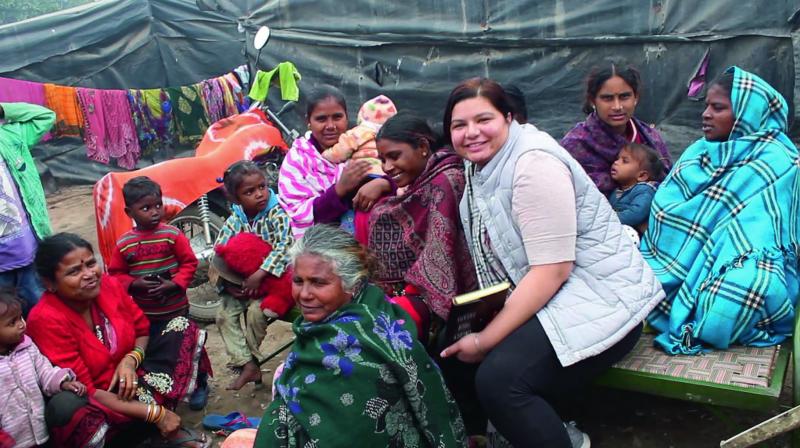 Ruhpreet (in white jacket) with the women and children in Patiala.

While the country is abuzz with the talks around the film Padman, in Patiala, one woman is starting debates around menstruation and fighting against the silence and taboo surrounding the same. It was not the best of the times in her life and yet Ruhpreet Kaur Rataul found the courage to do what very few are able to. After getting out of an abusive relationship and facing a divorce, Ruhpreet decided to give back to the community and find solace in the joy of others.

It was while taking generic classes for girls from the slums of Patiala there that she realised there was a lack of knowledge and awareness on menstruation. “There were days when some girls would not come for the classes. I spoke to their parents about it. Then we started talking to the women in the community and it became increasingly clear that there is a need for someone to fill in the communication gap around menstrual hygiene and process. We don’t have so many volunteers as of now and the outreach is small but I hope to expand it in the coming months.”

The Red Cross Society has come forward to help the cause as well. “For now, we distribute the sanitary napkins that we get from the society but it is not enough. We keep running out of stock. We will soon be installing a machine to produce pads locally and volunteers from the slums will help us. It will not only generate employment but also help the women and girls in the community,” she adds.

Talking about other issues concerning menstruation, she says, “Talking about the biological aspects of menstruation is still easier. But it is very tough to speak about taboo that exists around this issue. People are not ready to hear anything against the taboos. They still follow the traditions such as not going to the temples, not touching pickle, etc. I hope to create an ideological change in that direction as well. However, it is clear that it will take a significant amount of time to achieve that. I am also trying to open up to the men in the community about the same.”

Another area where she is facing issues is regarding the disposal of pads. “Women in slums face a lot of space constraint and diposal is a major issue for the girls. I am trying to bring up talks around this and hope to create better conditions in the future.”

The young social worker is also pursuing her bachelors in computer applications now. “I understand the importance of education and want to create a bright future for myself and my son. I hope this initiative of mine grows and is able to help young girls.”