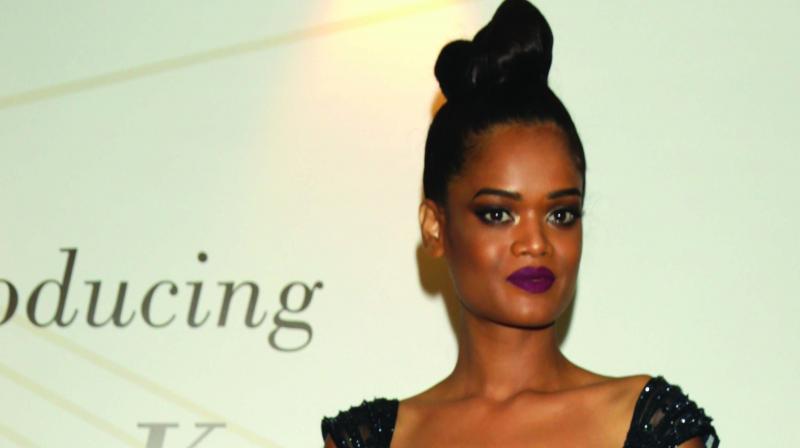 Life wasn’t easy for the tribal girl from Chhattisgarh who dreamt of shining in the limelight one day. Money was scarce, her mother worked as a house help. And with her chocolate skin, striking eyes, full lips, she didn’t fit the conventional prototype of beauty. But she was her own kind of beautiful. And she fiercely held on to her dream through the toughest of phases — till it came true.

The FDCI felicitated 33-year-old model Renee Kujur, whose striking resemblance to international R&B star Rihanna made her an overnight sensation, on day two of India Couture Week in the capital. Comparisions to RiRi and surprise at the resemblance are slowly wearing off, and Renee is now well on her way to becoming a supermodel.

For Renee, the dusky tribal girl from Chhattisgarh, the journey of becoming a model was not easy. While she was sure of her dream, she was hurt time and again by society’s reluctance to accept the beauty of dark skin. Recalling one of the many instances when she was snubbed, Renee shares, “At a fancy dress competition in school, when I went on stage, someone from the crowd shouted out, ‘Pariyaan kaali nahi hoti hain’ (angels are not black).” It hurt, but it didn’t shatter her dream. The incident proved to be a catalyst in her life and strengthened her resolve to give wings to her dreams. “These harsh words gave me the strength to fight,” recalls Renee.

Financial constraints was another big stumbling block in her journey. “Belonging to a lower middle-class family I decided not to be a burden on my parents. After completing school, I did odd jobs and saved money for my portfolio. What was more difficult was the fact that I being a tribal girl was expected to opt for a government job and nothing more,” shares Renee, who started her modelling career at 28 but had to wait for quite a while before getting her first break. She recalls, “Two years passed without any substantial recognition. After a photo shoot for JJ Valaya, there has been no looking back.”

Renee is today a celebrity in her own right. Not only has she been covered by over 35 national and international media houses in the last one month, but she is also on her way to becoming the face of a Tommy Hilfiger campaign, a brand for which she worked as a store salesgirl.

Reuniting with her family after years, an emotional Renee shares, “My father was a government servant who rode a bicycle all his life and my mother worked as a maid. But they left no stone unturned to give me a life that I always wanted. Even the house I live in today is bought from their hard-earned money. I now want to buy them a house and proudly say that my mother worked as a maid.”

It is not sheer luck or an accident of fate but grit and passion for one’s dream that makes one taste success, believes Renee, and this is what she advises those who are still struggling to achieve their dreams. “Hard work always pays off,” signs off Renee.