As Mumbai gears up for its biggest festival, we take a walk through the city where ganesha idols are being made. 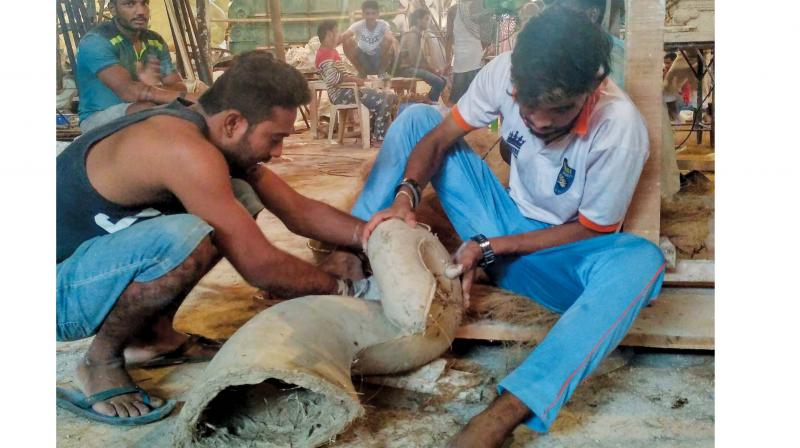 Trunk of Ganesh being made.

Next to a busy street in Parel, a group of five gathered for a walk inside the bylanes. As the city gears up for its biggest festival in September, the process of idol making is in its last stages. Organised by Breakaway this tour's guide, Ramanand Kowta explained the history of the festival, saying, “During the season just after the monsoon, the earthworms become active and at some places push out the soil. That is the softest soil, and people used to make idols from that.” The idol-making process used to be an intimate experience with all members of the family getting together to make it. Ganesh is seen as a guest, who comes for a few days, has fun and then has to depart, teaching the young ones to let go.”

Right next to the Central Railway ground in Parel, lies one of the biggest idol-making workshops, where craftsmen are busy putting the finishing touches to the idols. Some are completely painted and draped in dhoti while others are still in the mould, waiting to dry off. An artist explaining the process says, “Coconut husk is mixed with clay and is packed in the mold. Once it’s dry, the moulds are removed and a layer of wax is applied.” Nearby, another worker is busy torching the idols to spread the wax evenly on the idol. Walking around the workshop, one can see various elements being made, be it the backdrop of Ganesha or various body parts - everything under one shed. Noticing the various poses the Ganesha as acquired overtime, Ramanand explains, “Originally Ganesha in the sitting pose was meant for homes. And in case of pandals, Ganesha visits you so he is in standing pose.” But in recent times, the idols have taken various other forms and one in making also has a flying pose. On the other end of the workshop, where many idols are still in the initial stages of making, an artist sculpts the elephant-like ears from clay. “For other body parts, we can use moulds but for ears, since it’s so thin and fragile, it has to be hand moulded with clay,” he explains. Noticing the idols closely, one of the participants pointed out that the belly of Ganesha is not as round as it should be, to which the tour guide laughs and says, “People are getting fitter, they want their Ganesh to be fit too.” And after some hot chai and pakoda, the tour sets off for the next stop.

Walking next to the busy lanes of Parel, the tour guide also lead us to an old building with common space inside the compound, a rare sight in Mumbai now. There, a family is making small idols for Naag Panchami by making cobra idols. After a quick detour off the track, the tour gets back in search of more Ganesh idol workshop and discovers a smaller one, with idols ideal for homes. Noticing the trunk of Ganesha, Ramanand explains its significance saying, “For idols made for homes, the trunk of Ganesha will always be bent towards the left which is the feminine side and is ideal for homes, whereas for temples, the trunk is bent towards the right.” At these small workshops, Ganesh can be seen in various avatars. From unique colours such as grey and red to him sitting with Hanuman or looking like Krishna, the artists are experimenting with their creativity.

In the final leg of the tour, the group heads towards Lal Bagh where Mumbai’s most famous Ganpati sits. Crossing the lanes with a number of shops selling incense sticks and other temple products, one could definitely smell the delicate flowery fragrance wafting around. But your noses will get a quick shock, as next to these shops is the famous masala galli, selling all kinds of spices. A masala shop at the end of the lane with the pounding machines inside the shop attracts a lot of customers. “During summer, women would sit outside this shop for hours, waiting for their turn to get masalas made. They have their very own combination and they get the spices roasted and pounded in bulk for the entire year,” says Ramanand.