Kausik and Debanjali have sponsored themselves thus far, but have been promised financial support for their next voyage to Africa and America. 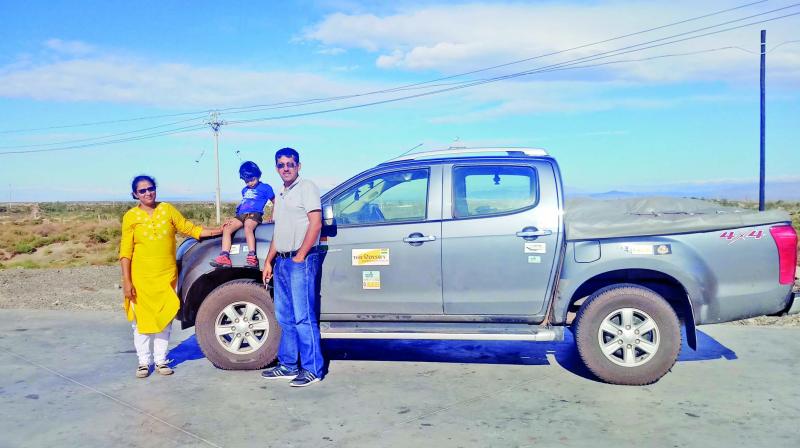 Forty-four-year-old Kausik Roy, his wife Debanjali and daughter Diyasinee are travelling across the world by road to create awareness about road safety.

As a child, Kausik Roy would board his father’s old Hindustan Ambassador, leave Kolkata, and not stop until they arrived in Rajasthan. His fond memories of road trips with his father across India had sown the seeds of wanderlust so deep that Kausik, a businessman from Kolkata, at the age of 44 decided to map the world by road. On an exceptional mission named ‘The Odyssey – Safe Drive To a Pain Free Life’, Kausik is spreading awareness about road safety while crossing various borders in his Isuzu D-MAX V-Cross.

“I always loved travelling and my father was the one to expose me to road trips. After travelling to most of the parts of the country, I thought of stepping out,” says Kausik, who is accompanied by his wife Dr Debanjali Ray and four-year-old daughter Diyasinee Roy on his travel. It was Debanjali who gave the idea to incorporate the mission into their adventure. The couple with their child reached Mumbai on Saturday after completing their first phase of journey till Iran.

“We both have been travelling for long, just to come out of our professional zones, so when we were planning this world trip we thought ‘why can’t we just take the cause of road safety?’ Road accidents are happening everywhere in the world’,” says Debanjali, who is an anesthesiologist by profession.

Touted as the first people to do such a world tour by road, the couple had been planning the trip for over two years. It was only in September 2018 that they finally ventured outside, crossing the borders of North Eastern India to Myanmar. “We were scared initially because we didn’t know how people of other countries would take this, and whether we will get accustomed to the weather conditions. But I know now that when there is a will there is a way,” shares Kausik proudly.

The couple reached Mumbai on Saturday after completing the first phase of their journey till Iran. They travelled from Myanmar to Thailand, Laos, China, Eastern and Northern Europe including Russia, Finland, Norway, Sweden, Latvia, Poland, Germany, Austria, France, Switzerland, Italy and Greece. After driving for more than 15,000 kilometres in Europe, the couple entered Turkey and headed to the Gulf areas, and finally reached Iran in the first week of July.

“The only way to come back to India from Iran is through Pakistan. We didn’t get permission for some political reasons, so we boarded flights to come back,” says Kausik. During the entire mission, the couple was engaged in awareness activities like delivering lectures and holding sessions at various school, colleges and NGOs in all the countries they stopped. The couple also visited government officials to discuss the challenges of safe driving and the drastic growth in the number of road accidents across the world.  “The visits and sessions have helped us as well. We are now taking up a few studies and research projects about the issue, so that we can be affluent with our knowledge when we go to other countries on our next trip,” Debanjali shares.

Kausik and Debanjali have sponsored themselves thus far, but have been promised financial support for their next voyage to Africa and America. “We can support ourselves. It’s not only about money, but also about the will to contribute to the society,” explains Kausik.

The couple also opens up about the hit that their careers may take because of their project. “It does affect my business and my wife’s patients, but we manage it. We will be working for our whole lives, but these things can only be done when they are most needed,” muses Kausik. His wife adds, “My patients are aware of my trips, and I try to keep in touch with them, but yes I have to miss a lot of official assignments since I can’t be present.”

The two will be taking a break for a few months before they leave for the second phase of their journey at the end of this year.