According to Sinhayana Foundation officials, it is more difficult to convince the parents to allow their kids to attend dancing classes. 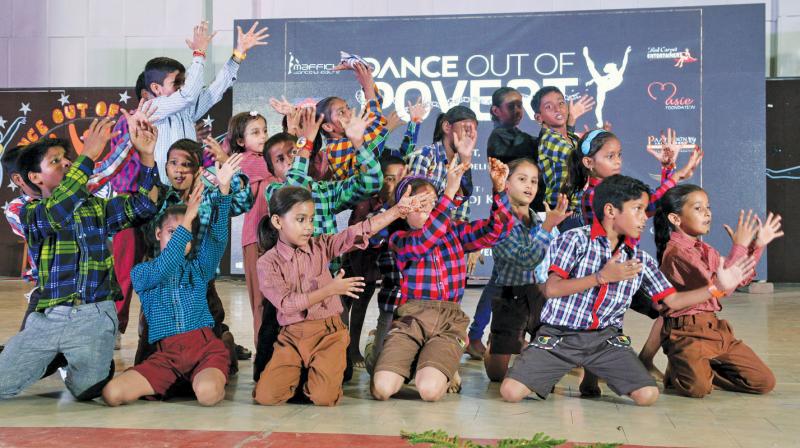 A city-based initiative aims at uplifting underpriviledged kids by not only teaching them about dance but also inculcating in them a zest for learning.

Dance Out of Poverty is an initiative that aims at teaching underprivileged children dancing. But that isn’t the only thing they do. Apart from dancing, the initiative also educates them enough to make them proficient enough to make a career out of their passion. Sinhayana Foundation, an NGO, provides underprivileged kids with this opportunity to earn a livelihood with the help of dance.

“These kids are full of talent, but they do not have the monetary resources to go approach higher education or even pursue other hobbies that they would be interested in, such as dancing and singing,” says Vinay Sharma, who is a part of the foundation. “There are several organisations and people who make attempts to provide these kids with proper education, but barely anyone comes forward to nurture these other talents,” he adds, and says that is how they came up with an initiative like this.

The DOOP initiative, which first started in New Delhi, has finally reached Mumbai. More than 400 underprivileged children have been provided with free dance training and grooming. The training is offered by well-trained choreographers.

Vinay shares how they go about organising these workshops. “We distribute pamphlets in slums to spread awareness about our free dance classes. Next up, auditions are held to select kids for the training,” she says. He adds, “We found that these kids are very focussed on dancing. Whatever we teach, they grasp it pretty quickly.”

However, according to Sinhayana Foundation officials, it is more difficult to convince the parents to allow their kids to attend dancing classes. “There is a common perception that dancing is only a hobby and there is no career in it. Just like white collared people, slum dwellers too are of the same opinion. It took lot of pains to persuade them that there are lot of opportunities in dancing and it can be a full time profession,” he said.

The foundation has designed a curriculum called ‘Dance Education and Proficiency Programme,’ under which training is given to slum kids not only about dancing, but also on fitness, nutrition, body language, personality development, communication, audio-video editing etc.

According to foundation officials, the initiative has started fetching results, as the trained students have found employment in government schools, private schools, events, and even private classes. “Many of them have started earning `15,000 to `20,000 per month. A girl from Delhi did a workshop for summer camps of New Delhi Municipal Corporation (NDMC) schools. We are planning to collaborate with corporates, wedding organisers to offer jobs to trained kids. We will also start an online portal to provide employment to them,” said Vinay.

One of the biggest achievements of the initiative is that it has helped slum kids to keep away from other bad influences. “Dancing has not only helped kids with the talent to enhance their skills, it has also kept them away from drug addiction. The DOOP initiative has showed that their lives can be brought back on track,” he concludes.