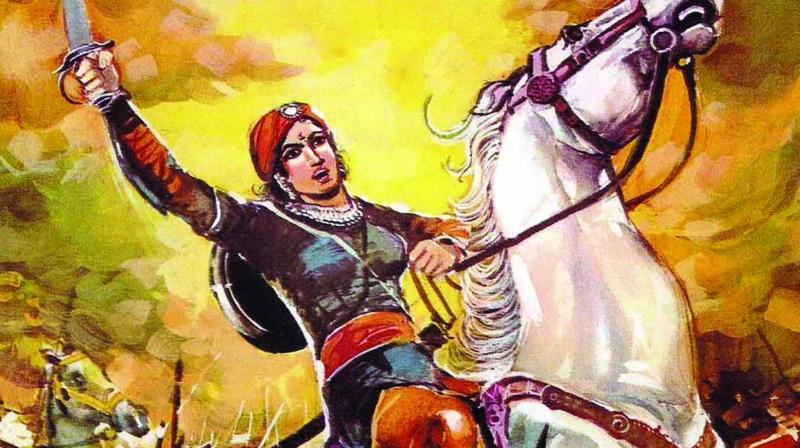 The campaign that runs till the end of December this year, will reach out to publishers, writers and sponsors asking them to donate a few copies of their books.

Stop!” the Rani shouted as loud as she could. “Stay and fight. We can defeat the enemy,” she continued. “A girl born into an ordinary Indian family, catapulted into an entirely new world with her marriage to the king of Jhansi. Rani Lakshmibhai’s life has both fairytale and courageous elements in it that one ought to learn” — thus reads blogger and social media consultant Sammy Sahni’s Instagram post. More such revolutionary books are going viral on social media this week, owing to the popular campaign #rebelbooks.

The campaign was initiated by Dr Shruti Kapoor, founder of Sayfty. The organisation based in India which also operates in the US works to educate and empower girls and women against gender violence. It has come up with a new initiative, Rebel Books. Having engaged the youth through weekly social media chats, workshops and campaigns, collaborations and inter-generational discussions about gender issues, the team at Sayfty wanted to try something new.

“When one of our interns, Katy Brennan, was walking across a book store in New York, she came across a ton of children’s books that challenged gender stereotypes. She shared images of the books and we came to the consensus that it would be beneficial for teachers and parents to do a campaign around it,” reveals Dr Shruti. They then launched #rebelbooks and encouraged the public to post a picture of a children’s book that challenges gender stereotypes.

Stating that the main objective of the campaign is to crowdsource and create a database, the team also plans to raise funds and donate some of the recommended books to underprivileged kids.  Talking about the title Rebel Books, Shruti says, “The minute a child is born, our society gets busy stereotyping them based on their gender through clothes, toys, books, words and even actions. Not every child fits into the preconceived notion of what it means to be a girl or a boy. So, in a way,  through Rebel Books you are rebelling against things that restrict your freedom as a child.”

Affirming that stories are an integral part of a child’s life, the team believes that to start an empowered generation, the children need to read, see and hear empowering stories. “Children are very impressionable from a very young age. For centuries, we have been telling the same stories about a prince charming saving a damsel in distress, though these narratives are reinforcing the concepts of masculinity and femininity from an early age,” shares Shruti, who is also The White House nominated change maker of 2016.

“According to the American Academy of Pediatricians, babies who are two years and under, should not be exposed to screen time at all. It is fully in the hands of the parents. We need to make sure that our children read sufficient books. Not only does it help spark the  imagination, it also builds their vocabulary and enhances concentration,” she remarks about the battles with technology.

The campaign that runs till the end of December this year, will reach out to publishers, writers and sponsors asking them to donate a few copies of their books. Also in the bucket list is a fundraising opportunity and a few partnerships with samaritans and organisations, which will take #rebelbooks global.