Achan, the photo series by Thrissur-based Syam Sathyan focusses on atrocities on children and how they should be trained to take on predators. 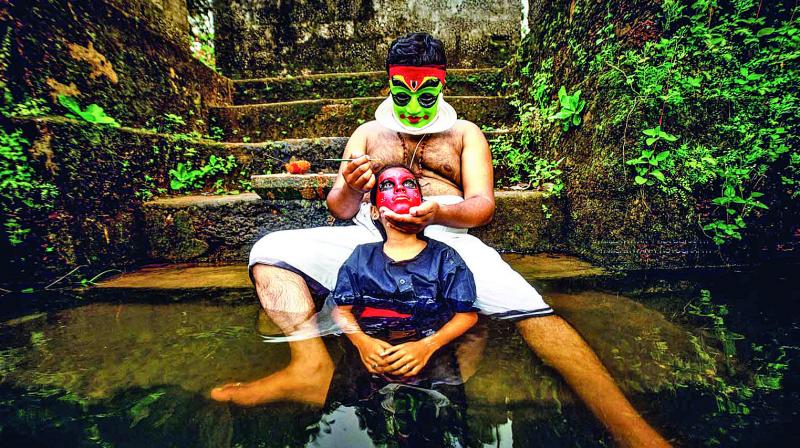 The story, titled Achan, begins with the main character, a man sporting a Kathakali vesham holding his baby (Bhadra) in front of wife’s pyre. He takes care of his daughter who grows in the middle of happiness.

In photography, visual storytelling is often called a ‘photo essay’ or ‘photo story’. It’s a way for a photographer to narrate a story through a series of photographs. Syam Sathyan, a Thrissur-based photographer, with the help of his talented bunch of friends, narrates a story of a little girl and her father, whose photos have become an instant hit. Syam reveals that the idea was based on the horrific crimes against women and young children we come across every day. “We are living in a world where women and young children are constant victims of sexual molestation and crimes,” he begins.

The story, titled Achan, begins with the main character, a man sporting a Kathakali vesham holding his baby (Bhadra) in front of wife’s pyre. He takes care of his daughter who grows in the middle of happiness. But fate has other plans for her as one day her teacher tries to molest her at school. However, her perseverance helps her resist the evil and escape from the molester.

Syam explains, “She was so innocent that her father had only narrated her stories of fairies, rainbows and sunshine. She could not cope with the mental trauma. Her father understands the situation and changes from pacha to a more aggressive vesham and murders the teacher. On returning home, he starts narrating his daughter stories of braveness and empowerment and trains her to defend herself to face any ordeal in future.