The Ashok Khale Sir Tribute Ride! organised by a group of cyclists is not only that but also an attempt to spread awareness about road safety. 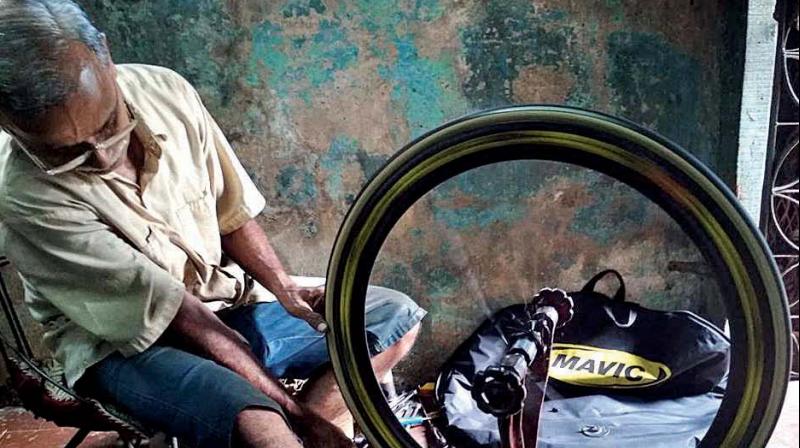 Ashok at his workshop

On November 12, the city lost veteran cyclist Ashok Khale, who even at the age 62 could complete the Khopoli-Khandala Ghat uphill route in less than 40 minutes. In a suspected hit-and-run case earlier this month, a motorist hit the cyclist on the Sion-Panvel highway, which was his usual route every Sunday.

On that fatal morning, Ashok had forgotten his ID card and cell phone at home, and when he didn’t return after 7 pm as was his usual time, the family approached the Shivaji Park police station to find out about an accident on that route.

Noted for his discipline, Ashok would not miss his regular routine of cycling at Marine Drive and, as his loved ones say, “The road was more home to him than anything else.” As a tribute to the stalwart, The Bicycle Wheel Technician is organising cycle ride ‘The Ashok Khale Sir Tribute Ride!’ starting from Khopoli to Khandala Ghat on December 17.

“For us cyclists, the best tribute would be to complete this ride from Khopoli to Khandala Ghat. We have also invited veterans who have shared the road with him,” says Sumit Patil, who is one of the organisers of the tribute ride.

The ride will start at 9 in the morning and will end at the ghat. “There are bunch of riders who are staring the ride from his home in Dadar, some are starting from Panvel, few from Karjat and another bunch will meet us directly at Khopoli base,” says Sumit.

The aim of this ride is not just to remember the national champion but also to take a look at the negligence at the hands of the state machinery, the police and the medical fraternity. After a motorist hit him, Ashok was rushed to the Wockhart Hospital in Vashi, but he was taken back and forth to Navi Mumbai and Mumbai hospitals until his family shifted him to KEM Hospital in Parel.

“After he met with the accident, 29 hours were wasted in just shifting him from one hospital to another. He was not given the required treatment!” rues Sumit.

Sumit says there is a huge responsibility on the cyclists to ensure their own safety. “We need to follow lane disciple; rules are for everyone, not just automobiles. What happened to Ashok sir could happen to anyone,” asserts cyclist Ravi Dhirwani, who is part of the tribute ride.

On the need of educating people about road safety, Sumit argues that cognisance and mutual respect is needed. “There is a large scope for coexistence, which will happen only when there is mutual respect among the motorists and an emphasis is laid on soft skills like how to treat people on road,” he adds.

From those who know Ashok, there was more to his cycling achievements. He was one of the finest wheel binders, according to software engineer, Mehul Ved. “My cycle meet with an accident and went to him to bind by wheels. He was a professional and my cycle hasn’t faced any issue since then,” smiles Mehul.