With multi-colored skin and a distinctive song, the Hyloscirtus japreria was discovered during expeditions over the past decade. 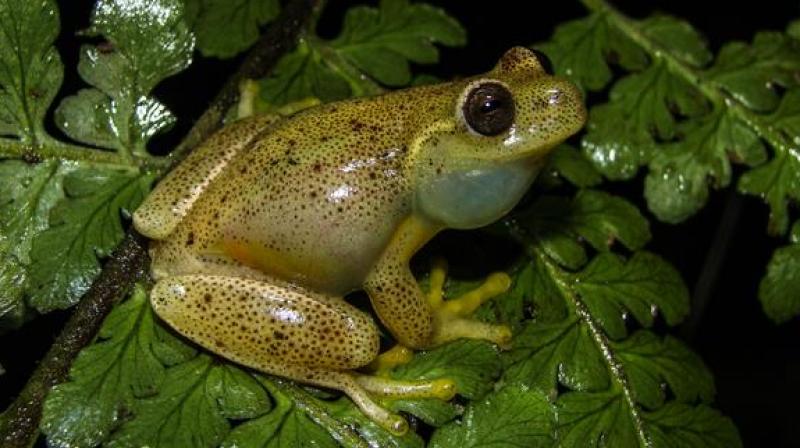 It was named in honor of the Japreria, a disappearing indigenous ethnic group in the Perija in the northwestern Venezuelan state of Zulia. (Photo: AFP)

Caracas: Venezuelan and Colombian scientists have identified a new species of frog in the Perija mountain range shared by both countries that is home to unusual species like this small amphibian.

With multi-colored skin and a distinctive song, the Hyloscirtus japreria was discovered during expeditions over the past decade living in rivers and cascades at altitudes above 1,000 meters (3,280 feet).

It was named in honor of the Japreria, a disappearing indigenous ethnic group in the Perija in the northwestern Venezuelan state of Zulia.

The frog's discovery -- published in February in the peer-reviewed scientific journal Zootaxa -- brings to 37 the number of species identified as belonging to the Hyloscirtus genus.

The journey that led to their discovery began in 2008.

"Several years went by before we found enough evidence that it was a new species," biologist Fernando Rojas-Runjaic, the coordinator of the study, told AFP.

Once they determined it was a "stream frog, we had to verify that it wasn't a Hyloscirtus platydactylus, another species found in the Perija in 1994," he added,

The scientists recorded the find with cameras and high-definition sound recorders to capture its distinctive coloring and analyze its song.

The sounds emitted by the frog, which can be heard from 15 meters (yards) away, is one of its most distinctive characteristics, said expedition member Edwin Infante.

It also has whitish stripes in certain parts of its eyes, ears, thighs and feet. The frog's iris is grey with a slender black reticulation.

Reaching the frog's habitats required expeditions of several days on foot and mule into the Perija mountains.

Access to the mountain range from Colombia was restricted for decades because of a conflict with leftist guerrillas, "which produced information vacuums," said Meza-Joya, adding that a 2016 peace agreement with the main rebel group should open the way for new discoveries.

"It opened a window to go into areas that were inaccessible. With peace, knowledge about biodiversity increases," he said.

Meza-Joya stressed that amphibians are fundamental to ecosystems, acting as regulators of insect populations that can be vectors of disease.

"Some species show marked vulnerability to environmental change so they are considered excellent indicators of the health of ecosystems," he said.