A royal scion with down-to-earth views

The Nizami legacy sits lightly on him. No hangers-on, no security personnel. 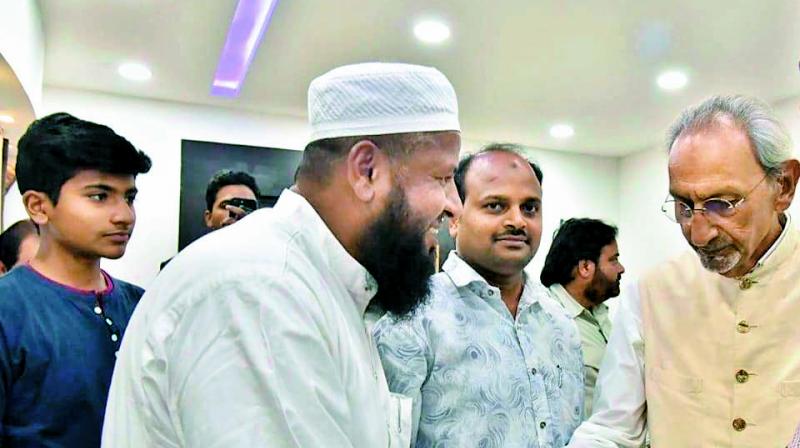 This royal scion hardly looks the prince that he is. Yet catching up with Mir Karamath Ali Khan popularly known as Muffakham Jah Bahadur is not so easy. He keeps flying between London and Hyderabad and is accessible only to some known persons. For the common man ‘Nawab Walashan’ remains a riddle wrapped in an enigma.

However, this time round Muffakham Jah has made quite a few public appearances fuelling rumours that he may be inclined to take more interest in the city affairs. In an unusual move he hosted dinner to friends and acquaintances recently at a star hotel. “No, there was no formal speech. He mingled freely with everyone and made general enquiries,” says former minister, Asif Pasha, who attended the dinner.

Muffakaham Jah usually keeps the media at arm’s length. On occasions when he lowers his guard he makes sure that he doesn’t reveal much. In an informal chat the other day, he made keen enquiries about the electoral scene in the country and the prospects of various parties. He faults the parties for making wild promises without telling from where they would get money to fulfil them. “You can’t fool people anymore,” he remarks.

Muffakham Jha, who has travelled a lot, doesn’t hesitate to call a spade a spade when it comes to civic amenities. He feels the condition of roads and sanitation in Hyderabad leaves much to be desired. “There is so much filth even in areas like Banjara Hills and the less said about the old city the better. We give examples of Singapore and Dubai not knowing that it is Indian brains who did wonders there. If Indians can transform cities elsewhere why can’t they do it here,” he asks.

Why doesn’t he complain to the authorities?

He feels the Nizam’s jewellery could be a source of revenue for the Telangana  state government if displayed permanently in Hyderabad. The fabulous gems have the potential to attract tourists from within and outside the country. “We (Nizam family) forced the Government of India to acquire the jewellery as we wanted the collection to remain in India. It’s such a great heritage and it should be showcased in Hyderabad. All that the government needs to do is to spend a few crores on security,” he says.

Foreign tourists make a beeline to Rajasthan and Taj Mahal and other monuments when Telangana state too has so many heritage sites to boast off. The southern belt linking Hyderabad, Bijapur and Burhanpur should be developed to boost tourism.

However, he is happy at the efforts being made by the Telangana State government to restore the original glory of the Qutb Shahi tombs. Last week he made a detailed inspection of the historic Macca Masjid and saw for himself the ongoing restoration works.

How is a typical day in the life of the prince? Well, early morning one can see him brisk walking in Banjara Hills, dressed in casuals. When in London he walks at the Kensington garden right across his palatial house. During the day he visits the HEH Nizam Trust office at Masab Tank, Princess Durreshehvar Hospital at Purani Haveli and the Princess Esin Girl’s High School adjacent to it. He closely monitors the functioning of these institutes.

“Thanks to technology the office chases me even when I am in London,” he chuckles.Interestingly, he is not tied down to the past.

He was a young boy when his grandfather, the seventh Nizam, Mir Osman Ali Khan, died. “I have heard so much about the Nizam era administration. But I don’t want to live in the past. This is democracy and age of globalisation. There is no use drawing comparisons”, he says.

But he is keen on presenting the Deccan history in the correct perspective. “I want a book to be written reflecting the socio-economic and cultural development of that period,” he says.