Japan's emperor steps down to usher in new imperial era

Japan's emperor to step down in 200-year first, handing the Chrysanthemum Throne. 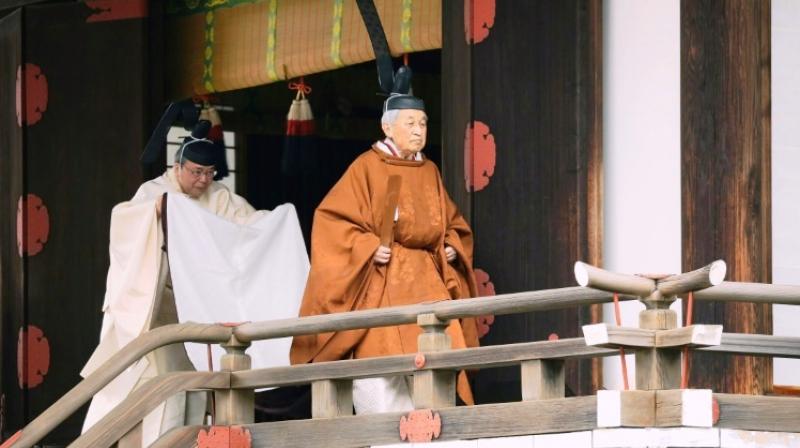 The ceremonies will all take place behind closed doors, but small crowds had gathered outside the Imperial Palace in Tokyo, despite clouds and rain. (Photo: AFP)

Tokyo: Japan's Emperor Akihito prepared Tuesday to become the country's first monarch to abdicate in more than 200 years, handing the Chrysanthemum Throne to his son and ushering in a new imperial era.

In a set of solemn ceremonies, Emperor Akihito will abdicate in favour of 59-year-old Crown Prince Naruhito, also kicking off the new imperial "Reiwa" era, meaning "beautiful harmony" that will last throughout the new monarch's reign.

The ritual-bound process began Tuesday morning with the emperor, dressed in expansive golden-brown robes and a towering black headpiece, "reporting" his abdication to his ancestors and the gods at several "sanctuaries" at the palace.

But the main event will be at precisely 5:00 pm local time (0800 GMT), when the 85-year-old will formally step down in a 10-minute ceremony in the "Matsu-no-Ma" ("Room of Pine"), considered the most elegant hall in the sumptuous Imperial Palace.

The ritual will be conducted in the presence of the imperial regalia, an ancient sword and jewel considered crucial evidence of an emperor's legitimacy.

However, Naruhito will not become emperor of Japan until the stroke of midnight and he will "inherit" the regalia at a second ceremony Wednesday at 10:30 am before making his first official public remarks shortly afterwards.

Tomorrow's ceremony was expected to be attended by just one woman the sole female member of Prime Minister Shinzo Abe's cabinet. Female royals are prohibited from participating.

The ceremonies will all take place behind closed doors, but small crowds had gathered outside the Imperial Palace in Tokyo, despite clouds and rain.

"I'd like to thank the emperor for his hard work," said 76-year-old Hironari Uemara, visiting Tokyo from Okayama in western Japan. His wife said she would miss Akihito and the outgoing imperial Heisei era. "I feel like crying," she told AFP.

The popular Akihito stunned Japan when he announced in 2016 that he wanted to give up the Chrysanthemum Throne, citing his age and health problems he has been treated for prostate cancer and has also undergone heart surgery.