With the recent incident in North Mumbai, it is getting more and more pertinent to have proper domestic workers’ policies in place. 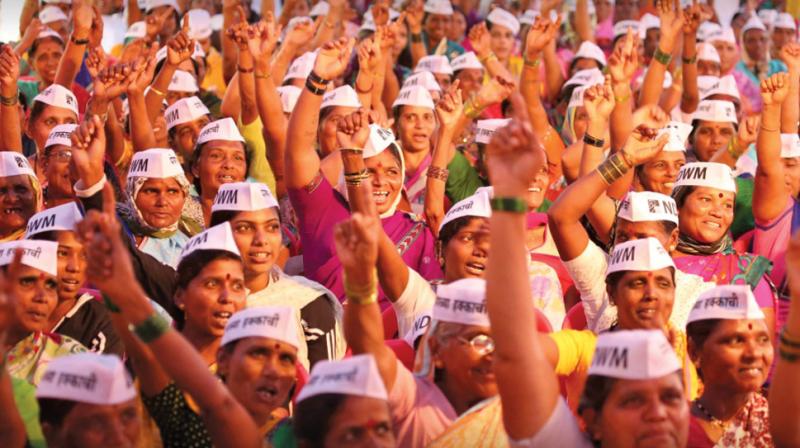 The domestic helps went on strike to protest this move on May 21, and most have been summarily sacked for protesting these rates. ( Photo: NDWM)

The Raheja Vistas society in Chandivali this month has kickstarted a storm of sorts. In an attempt to standardise domestic help wages, a rate card was put up, talking about remuneration that will be paid for the kind of work being done. The domestic helps went on strike to protest this move on May 21, and most have been summarily sacked for protesting these rates. This is not an alienated case of reducing house helps and ayahs in a metropolitan city like Mumbai to mere objects working to make life easier for busy families.

“There are various kinds of discriminations which the domestic helps face — most commonly, they are not allowed to use toilets, they are served in separate utensils, in fact, many don’t even offer them tea. But exploitation is more important than such class discrimination,” explains Christin Mary from National Domestic Worker’s Movement, talking about the dehumanising conditions most helps work under.

A resident from the said society on condition of anonymity told The Asian Age that it’s not outright violation of the domestic help that they had in mind. In fact, things were getting out of hand for the residents, hence the decision. “Most of the people in the society are new, and the helps were asking exorbitant amount. So to take the middle path, the residents thought of the rate card,” said the source. “We would not like to exploit someone who’s working for us. In fact, just like how we have to keep negotiating with our employers, I believe, they should be given a chance as well,” the source added. Seemingly, the matter has been resolved at Raheja.

Surekha Khandagle, a domestic help who works at residences in the society, says, “Yes, things have normalised. In fact, as we speak, I am working at someone’s house.” When asked about discrimination and exploitation, the mother of two added, “Needless to say, this is unfortunate, but it depends from people to people. Some people treat us really well, while some just the opposite. However, I have been lucky so far; haven’t come across a bad employer.”

But the question remains whether domestic helps and ayahs are treated badly. “When we keep housemaids at home, some families take care of their them, while at others, are very particular and make them work more than they deserve,” says Yvonne D’Souza. She runs a domestic providing service in Borivali. “We should treat maids with respect and dignity, because that’s the only way you earn some back. However, there are instances when domestic workers don’t show at the said time causing inconveniences,” she says. Yvonne however points out that the conditions are much perhaps much better. “Maids are getting sufficient salary, if they are cooking at one house, they are getting paid about Rs 4-5k, and if they work in three houses, they are getting nearly Rs 14-15k, which is significantly above poverty line,” she points out.

However, things aren’t that simple, says Christin. “Last year, we had introduced a rate card for the domestic helps. But the rates that the residents have provided is even lesser,” she points out. This is when, she insists, the government should have a unilateral wage for domestic help in place. “There are nine states in our country (Kerela, Karnataka, Arunachal Pradesh, Rajasthan, Bihar, Jharkhand, Meghalaya, Assam and Haryana) where such laws are in place. Maharashtra government has no such provisions and hasn’t promised any,” she points out.